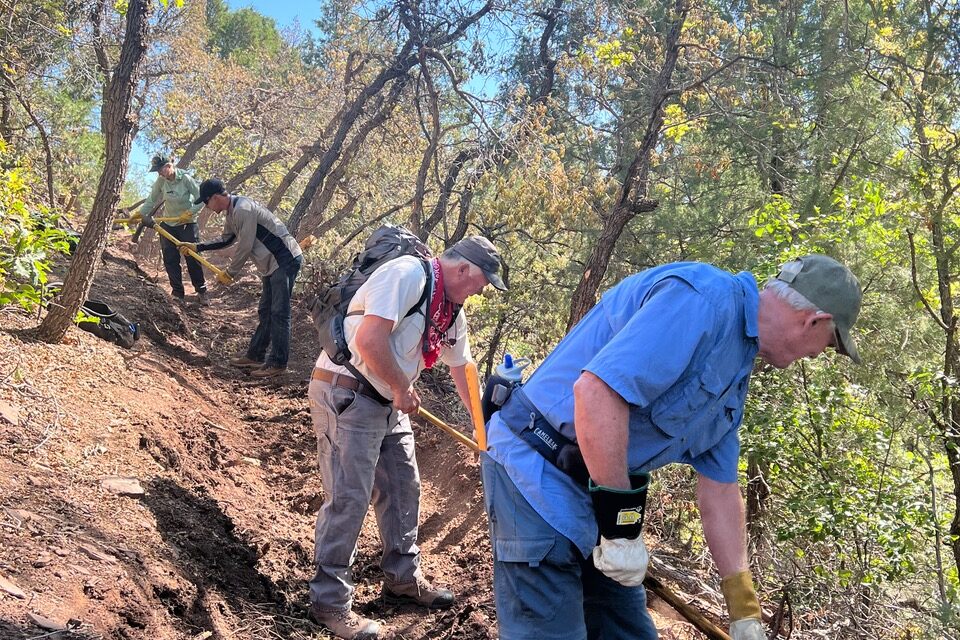 For six years, the previously continuous 100-mile, multiuse Rainbow Trail (Trail #1336) that runs from Marshall Pass to the Great Sand Dunes National Park along the east side of Sangre De Cristo Mountains was cut in half.

Wildfire damage and flooding cut the 100-mile-long Rainbow Trail in two for the past six years. A trail reroute added four miles to the trail length but reconnected this famous Central Colorado recreational trail. Courtesy photo.

The trail is continuous again thanks to grants funded by off-highway vehicle registration stickers and a great joint effort by public land managers, a local motorcycle club, and local landowners for the benefit of all trail recreators.

The 2016 Hayden Pass fire caused a massive post-fire erosion event that completely obliterated a three-mile section of the Rainbow Trail and sent massive loads of sediment and large rocks down a drainage near Coaldale, Colorado.  Several houses and properties were damaged and the drainage remained unstable and prone to flash floods.

The flood-damaged drainage was too steep and dangerous to repair the trail, so a new location — a reroute of the trail — had to be found.  In the interim, the damaged section was closed for safety – thus cutting the Rainbow Trail in half. 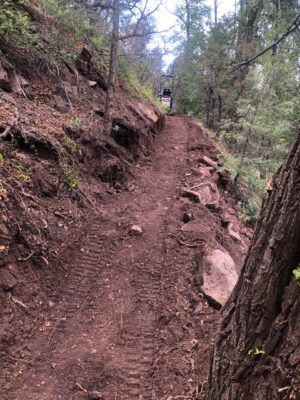 The reroute of the Rainbow Trail from the section damaged both by fire and flood to a new route added four miles to the trail. Courtesy photo.

Finding a viable reroute to reestablish the continuity of the trail was an extremely difficult and complicated undertaking.  Tireless work by the USFS Salida Ranger District (SRD), the BLM Royal Gorge Field Office, and the Central Colorado Mountain Riders (CCMR) motorcycle club along with support from area homeowners, resulted in the design of a sustainable reroute.

The reroute added four miles to the trail – thus lengthening the Rainbow Trail to 104 miles long.

CCMR also submitted and was awarded a CPW OHV grant to fund the Mile High Youth Corps (MHYC) support.  The two organizations, together with the SRD OHV crew marked out the trail (known as flagging) and chainsaw crews cleared the trail corridor.

Then CCMR let a competitive subcontract to Trailcat Enterprises for the mechanical excavation work using two mini excavators on the approximately seven-mile reroute.  The excavation and post-excavation cleanup were completed and the trail reopened for motorcyclists, hikers, mountain bikers, and equestrians in late July, 2022. 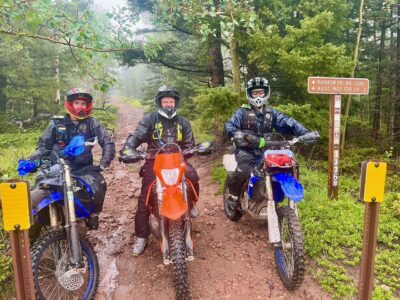 To celebrate the reconnection of the two portions of the Rainbow Trail after being split for six years, CCMR Vice President, Anthony Ware, led a group of CCMR and SRD OHV crew riders on an end-to-end one-day ride.

The CCMR has formally adopted fifty-four miles of multi-use trails to oversee upkeep; now including two Rainbow Trail sections. It is asking that recreators read their trail kiosk signs with tips for multi-use trail recreation and public land use rules.  Their message: “Respect gets respect.  Stay on the trail and practice good trail etiquette.”

Featured image: Central Colorado Mountain Rider (CCMR) volunteers were the handwork crew at work rerouting the section of the Rainbow Trail damaged six years ago; first by the 2016 Hayden Pass Fire, then by the floods that followed.