The Central Colorado Conservancy (CCC) is spearheading the effort to preserve much of the Centerville Ranch property by reaching a contract agreement with the developer of the property, that once the terms are met, will finalize in perpetuity a conservation easement. There has already been a positive public response toward the $100,000 local fundraising effort necessary to make the easement a reality. 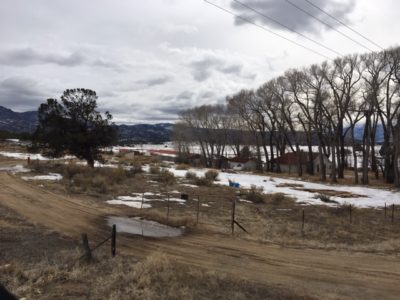 The conservation easement will protect 650 acres of the Centerville Ranch in perpetuity. Photo by Jan Wondra.

Centerville Ranch owner, Jeff Ince, signed the conservation agreement that will preserve about 650 acres of the 950-acre ranch property. That is, provided grants can be worked to raise $1.3 million to purchase developments rights for the majority of the property while the rest is developed by Ince.

To do so, the conservancy needs to raise $100,000 in ‘seed money’ to demonstrate community backing for the project to convince agencies who may provide grants the community is solidly behind the preservation effort.

The initial announcement was greeted with enthusiasm. Executive director Andrew Mackie said the preservation effort exactly fits the mission of the organization. He described it as a win for all stakeholders – the developer, the community and for preserving the natural resources, water and wildlife habitat found on the property.

Conservancy board president Cindy Williams said the initial response to the local fundraising for ‘seed money’ to aid getting grants from state agencies for the Centerville project has been great.

“The reaction to the Conservancy’s Centerville Option has been robustly positive from across the community. We had over $20,000 of donations in the first 24 hours – only $80,000 to go,” said Williams. “Chaffee is a special place where people get involved to support the future and the quality of life they treasure.”

“Central Colorado Conservancy is proud to be guiding a community ground-up solution“ she added.

Williams said one citizen at the public session where the agreement was announced said, “It feels so good to be part of this community working together to create a win-win solution.”

Even more local funding support has come in since then. Williams talked about the effort to complete the funding process, which could take until 2020, depending on the budget timetable for the statewide agencies which will be approached.

“I don’t want anyone to think that we are done. There is still a lot of work and effort to get the Centerville Conservation Easement in place,” said Mackie. “We have a strong strategy in motion to get there and will need community support.”

“As we work to raise $1.3 million to purchase development rights on 650 acres and tie the flowing waters to the land, raising $100,000 of community donations is a critical and urgent first step. These seed funds not only enable conservancy staff to advance technical project work but are essential in showing to potential funders across the state that Chaffee County has “skin in the game,” she said.

“To raise funds of this scale, we must compete with counties across the state working to raise funds for their own projects. The more we can demonstrate that this matters to the people of Chaffee – with donated dollars in hand – the more likely we will have success in raising the full $1.3 million and protecting the vistas, waters and wildlife in the heart of Chaffee County,” Williams added.