Earlier this week, the United States reached a number that few among us envisioned: more than 1,000,000 dead from COVID-19. As in more than one million people — fathers, mothers, sisters, brothers, sons, daughters, grandparents, children — dead. That makes it the third leading cause of death in the U.S., and it’s not over. Scientists say that the number of people who have died with COVID, not from it, is most likely much larger than this unbelievable fact.

The humanity of this can get lost in the numbers. These people are our family members, neighbors, co-workers, and friends. These are people who will never again sit at the kitchen table, watch a grandchild’s baseball game, attend a rodeo, go off the school, or hug their mothers. Nearly as sad, is the unresolved grief of this moment. 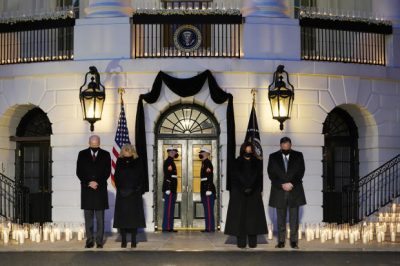 From left, President Joe Biden, First Lady Jill Biden, Vice President Kamala Harris and her husband Doug Emhoff, bow their heads during a ceremony to honor the 500,000 Americans that died from COVID-19, at the White House, Monday, Feb. 22, 2021, in Washington. (AP Photo/Evan Vucci)

When we reached half a million dead, President Joe Biden honored the dead with a solemn ceremony. Now that feels like light-years in the past, but it was only a little over a year ago.  What do we do next?

For so many, the grief is a grey veil of sorrow undealt with. Why? Because the loss has been enormous. Because the loss of those we love has been buried under partisan vitriol, power-grabbing political messaging, and ridiculous arguing over small pieces of cloth.

“Your right not to wear a mask doesn’t trump my right to live,” cried one woman at a grocery store in 2020 at a man leaning in front of her in the produce department. She actually was crying and it wasn’t the onions in her hand.

The cry represents the crux of a reality of selfishness and cruelty; a simple gesture of the community (“We’re all in this together”) not accepted by a significant portion of the U.S. population, many of whom call themselves “Patriots”. This is sad.

The global numbers of this coronavirus pandemic are even more staggering. The official numbers as reported by Johns Hopkins University COVID Tracking look like this:

But even these sobering numbers, says the World Health Organization (WHO) are misleading. WHO now estimates that due to underreporting, especially in under-developed countries, the death toll from COVID-19 is most likely around 15 million people dead.

WHO’s tracking shows that cases of the latest, highly-infectious COVID Omicron subvariant BA.2 are growing. There have been more than half a million cases in the last 24 hours, and hospitalizations and deaths from COVID are on the rise. There is a 44 percent increase in Emergency Room visits due to COVID-19 and infections related to the disease are 27 percent higher, though FDA officials claim that the numbers are under-reported.

The Chaffee County Coroner’s Report for 2021 to the Chaffee Board of County Commissioners earlier this week was sobering as well.

“We’ve had six deaths from COVID – it’s still out there,” said Coroner Jeffery Graf. He said that this number is compared to four suicides and 59 natural deaths in the county in 2021. Noting the increased COVID cases and suicides, he added “Our calls have gone up every year. I’d estimate 15 to 20 percent per year since I’ve been coroner. ”

Thanks to science, and the amazing effort to develop vaccines for this deadly virus, the casualty numbers are not even higher. Just within Colorado, 12,560,475 vaccination doses have been distributed and 10,757,510 have been administered.

To say that we humans have not conquered COVID is simply a fact. Since this virus exists to replicate, AVV points out that children ages five and under remain totally unprotected. This means that while the rest of the population is going out, eating out, traveling on planes, and appears to have forgotten the seriousness of this pandemic, parents of young children feel completely left behind.

Until their children are protected, these parents remain in the shadows. So, for that matter, are the grandparents of these young children. This, too, is sad.