2018 a dangerous year to be a journalist

You might think with when the United States news magazine Time named journalists as their Person of the Year – titling their announcement “The Guardians and the War on Truth” – that 2018 was a good year to be a journalist. You would be wrong. According to a report published last week by Reporters Without Borders, this past year was the worst year on record for deadly violence and abuse toward journalists.

Simply being a journalist attempting to cover the story, report the truth, or shed light on the underbelly of authoritarian governments got 80 journalists killed this past year. Another 348 journalists are in prison and 60 are held hostage around the world as this article is posted. 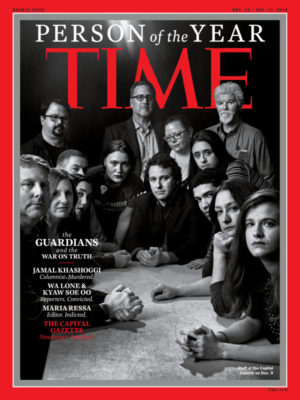 The news magazine Time named journalists, here the staff of The Capital Gazette in Annapolis, Maryland as their “Person of the Year”. 2018 was the most dangerous year on record to be a journalist.

This has been a year when journalist Ruben Pat was gunned down on a Mexican beach, a car bomb killed Malta’s Daphne Caruana Galizia and Bulgarian Viktoria Maritaja was beaten, raped and strangled. Yaser Murtaja was shot by an Israeli army sniper. At the Capital Gazette in Annapolis, Maryland this summer, the news room was stormed by Jarrod Ramos, who murdered five news room employees. He had harassed the newspaper for six years. In October the grisly murder of The Washington Post journalist, Jamal Khashoggi, inside the Saudi Consulate in Istanbul, gained international condemnation.

Americans are more likely to consider journalism, at least as practiced in the U.S. , a safe profession practiced with pens and computers. It is that. But it is — always — a search for the truth. This year, for the first time in a report that has been issued annually since 1995, the United States now ranks in the places where the business of doing journalism is considered hazardous.

In Turkey, in Hungary, in the Philippines – despotic and authoritarian leaders have repeatedly referred to journalists as “terrorists,” “spies,” and disseminators of misinformation. In the Philippines alone at least 80 journalists have died doing their jobs in the past two decades. President Donald Trump, with his repeated denigration of the media as “the enemy of the people”, and his labeling of journalists as “fake news”, has not helped the situation.

“The hatred of journalists that is voiced, and sometimes very openly proclaimed by unscrupulous politicians, religious leaders and businessmen has tragic consequences on the ground and has been reflected in this disturbing increase in violations against journalists,” said Reporters Without Borders Secretary-General Christophe Deloire.

“Amplified by social networks, which bear heavy responsibility in this regard, these expressions of hatred legitimize violence, thereby undermining journalism and democracy itself,” he said.

The rampage this past summer in the Capital Gazette news room was the deadliest attack on journalists in modern U.S. History. While it brings small consolation, the most dangerous place in the world to be a reporter is conflict-zone Afghanistan, where 15 journalists were killed in 2018. It was followed by Syria, where 11 journalists lost their lives this year. Mexico, where nine journalists died in 2018, was the deadliest country for journalists to work in outside a conflict zone.

The report, issued from the media watchdog’s headquarters in Paris, noted the marked rise in hostility toward media personnel around the world, not just in conflict zones. After falling for three years in a row from 2014 to 2017, the number of journalists killed doing their jobs rose 8 percent over 2017 statistics.

One could ask why it is that dictators fear journalists, but the answer to that is simple. Because journalists report the truth. The news magazine Time this year chose journalists such as Kahshoggi and the Capital Gazette staff as the publication’s “Person of the Year” describing them as people who were attacked in what it called the “War on Truth”. The Person of the Year is Time’s annual issue that features and profiles a person, a group, an idea, or an object that “for better or for worse… has done the most to influence the events of the year”. To read about this year’s selections, follow this link: http://time.com/person-of-the-year-2018-the-guardians/

As Time journalist Karl Vick explains it, “Khashoggi put his faith in bearing witness. He put it in the field reporting he had done since youth, in the newspaper editorship he was forced out of and in the columns he wrote from lonely exile. ‘Must we choose,” he asked in the Washington Post in May 2018, “between movie theaters and our rights as citizens to speak out, whether in support of or critical of our government’s actions?’”

As Vick explained it, Khashoggi’s death “laid bare the true nature of a smiling prince, the utter absence of morality in the Saudi-U.S. alliance and—in the cascade of news feeds and alerts, posts and shares and links—the centrality of the question Khashoggi was killed over: Whom do you trust to tell the story?”