Salida Police Chief Russ Johnson gave the Salida City Council a police department annual statistic presentation during its Feb. 16 dual work session and council session. The most startling statistic for 2020; the department’s 25 percent increase in calls over 2019. The Salida Police Deptartment had a total of 1,366 calls for service in 2020; an increase of around 114 more calls per month.

“By far the busiest year in the history of Salida Police Department.,” said Johnson. 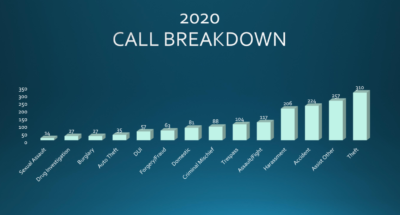 A multitude of things were up across the board according to Johnson. “Overall everything was up and a few of them were substantially higher than the year before,” he explained. Though calls were up, arrests were down due to the jail being closed because of the COVID-19 pandemic.

Reports of trespassing, harassment, sexual assault, car theft, and theft were all up in 2020. The increase in car theft was associated with one individual who is currently in custody after multiple times of being arrested and posting bail to get out.

Salida PD is still investigating why there has been such an increase in trespassing. They are also currently looking into why sexual assaults were up but believe COVID-19 has played a part in the increase. “I think some of that was related to COVID and people being at home and not being able to get away as easily has led to some of that,” said Johnson.

“Theft, trespassing, and harassment ended up being our biggest three. Our thefts went over 300; we had 310 theft calls and that’s property, bikes, really anything related to property.”

The Department uses area mental health resources on calls in some cases of trespass, as there has been an increase in the homeless population. “Some of it has just been people calling because someone is going through their garage and talking about working for the FBI or aliens and those end up being mental health calls.” 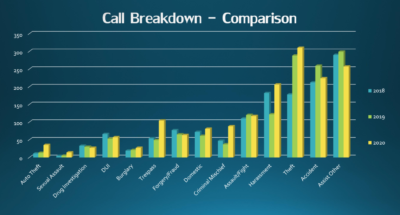 The department works with multiple different agencies around Salida and the County on mental health calls including Solvista, the Alliance, CTC, FYI, the Adult Protection Team and Restorative Justice. When the department receives such a call, they investigate the safety of the scene,  then call Solvista who sends a co-responder.

“If we have a guy that’s out on the street talking to himself, making people feel uncomfortable they’ll contact the police department. We’ll go down there and check on him. If it’s something that needs further attention with mental health, then we’ll call Solvista, they’ll send a team member out and they’ll handle it from there.”

Johnson said that the department has developed a quarterly meeting with the Solvista team to help communications become stronger between the two entities and they are refining their joint processes. When the department is initially called to a mental health call, they respond and make the scene safe, so the co-responders can come to do their job. If the person is already on a safety plan (which is a plan Solvista has set up to keep that person safe so they don’t harm themselves), the police department receives a second call about the individual. The call goes directly to the supervisor, where it will be routed to a clinician unless a police presence is needed.

“There are some calls where we have ended up going back three or four times on a person and some of those turn into us spending two or three hours of one of our guy’s time repeatedly going to the same person. We’re hoping that [the new] plan works,” explained Johnson.

In cases of domestic violence where the police department is aware a situation occurred, but the survivor does not want to step forward and speak, they are put in contact with the Alliance where they receive guidance on how to proceed and get help.