2022 Parade of Lights Creates a Gathering Place For All 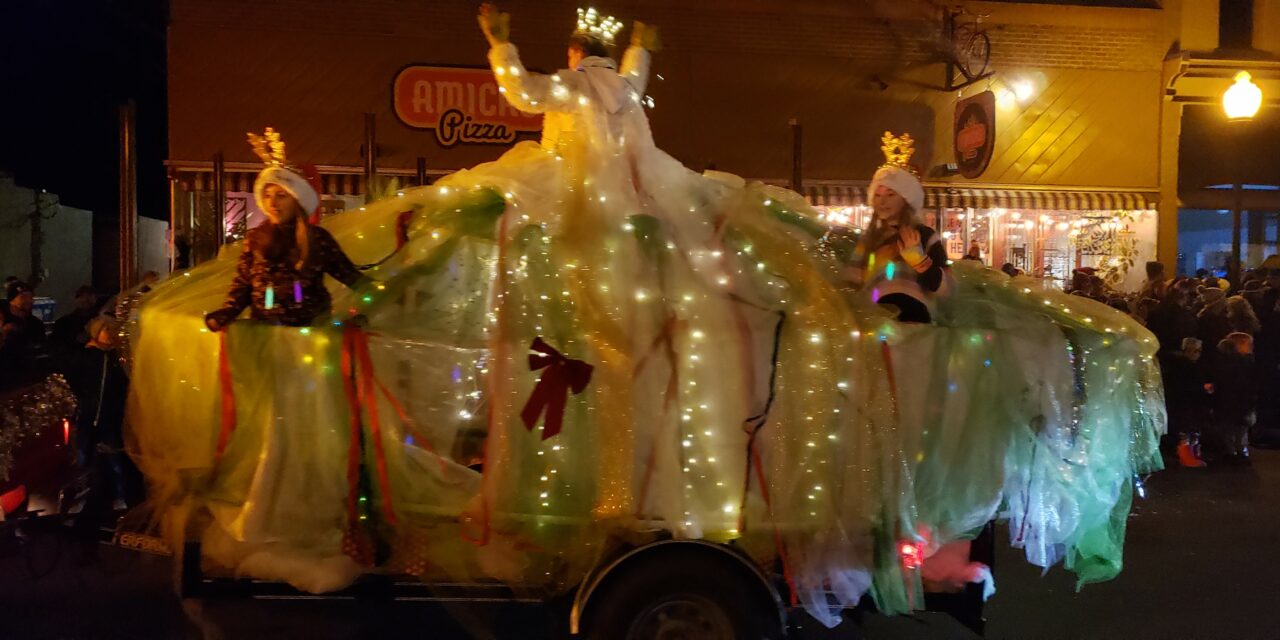 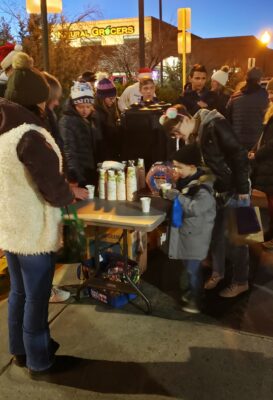 The community was ready to get out and celebrate the day after Thanksgiving; at least that was the message Friday night as a near-record crowd turned out to see Salida’s much-loved tradition — the Parade of Lights and the lighting of “Christmas Mountain USA”.

The hot chocolate and cider stand at Second and F Street was kept busy, yet at the same time, the staff at Salida Pharmacy and Fountain dished out ice cream as fast as they could scoop it. Which could just mean that the weather was perfect for an evening outdoors.

Hot pizza in takeout boxes also kept the crowd fortified as they waited for the parade to kick off. 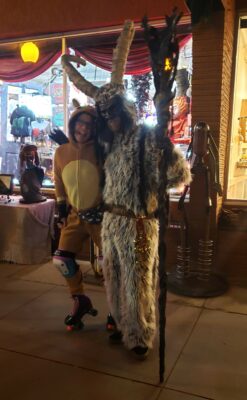 “Krampus” snags a roller-skating victim with his paws and torchlight. Merrell Bergin photo

“Night of the Nutcracker” theme a celebration for locals and visitors from afar.

While Santa Claus and numerous floats received vehicle numbers and lined up at Alpine Park, a different sort of holiday icon hung out in his lair at 132 F Street again this year.

“Krampus” in his horned and furry suit carried a torch searching for “naughty” children and adults as part of an ancient Eastern European tradition.

All in good fun, Krampus mostly sought to thoughtfully engage and dutifully pose for photos.

Once the parade led off with a color guard, 4-H royalty, a band of Salida Circus performers, marchers, their animals, and brightly lit floats followed in a stately fashion down F Street, awaiting the judge’s decisions as to “best in class”.

Dogs, many with holiday sweaters and lit-up colored garlands (some wearing tutus and wacky hats) were everywhere. No cats were seen; likely for the best.

The antlered “Rain-Goats” returned this year, along with their handlers and some confetti shooters, delighting the crowd.

Classiest of all was the equine team pulling the Badger Creek Ranch wagon.

A variety of colorfully lit vintage, 18-wheeled, and off-road vehicles, pulling motorized floats cruised by next, some with singing and dancing performers hanging on. 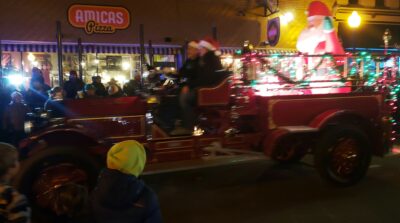 A blaze of blue lights up the night during the 2022 Parade of Lights. Merrell Bergin photo. 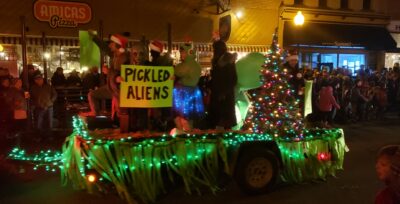 The Pickled Aliens from Poncha Pub float during the 2022 Parade of Lights in Salida. Merrell Bergin photo.

Santa waves to the crowd from his perch on the back of the Salida Fire Department’s T-1 truck. Merrell Bergin photo.

At the end of the parade, Santa performed his usual magic, lighting the “tree” that took up much of the 600-foot Tenderfoot Mountain, creating the nationally famous “Christmas Mountain USA”.

A few seconds later, Santa Claus, onboard the Salida Fire Department ladder truck signaled, touching off a brilliant fireworks display to the cheers of the crowd. 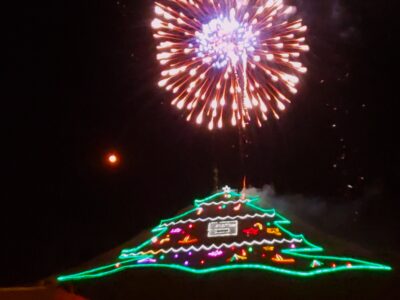 While each year is a little different, this decades-old, night after Thanksgiving tradition is a welcome chance for people to meet their neighbors, meet visitors from every state, and re-live the wonder of their childhoods.

The Parade of Lights and the lighting of Christmas Mountain the day after Thanksgiving are part of what makes Salida unique. It begs the question: must we wait for just one night a year to have everyone turn out and all enjoy good cheer?

Surely the four-season wonders we enjoy might inspire more opportunities to gather and share all that we have in common!

Featured image: The queen and her helpers at the 2022 Parade of Lights in Salida. Merrell Bergin photo.