Walking around the fairgrounds getting to speak to some of the local 4-H youth today was a pure joy for me. Everyone proudly spoke about their animals and filled me with all kinds of facts that I mostly did not know.  So now I know that whether is what one calls a neutered male sheep.  That it is extremely important to keep one’s hog under a cool mist of water because they do no sweat.

Turkeys have really large feet. I attempted to learn as much as possible about how to show a turkey, not that I’ll ever participate in showing a turkey. I’m just curious about the best practice to raise a turkey and how to get a turkey from point A to point B.

I also learned that black Angus cattle are mostly mixed with some other cattle breeds. The Colorado State University does ultra sound on the animals to determine their fat content. The 4-Hers get to typically sell one of their animals they are showing at the Saturday auction. If they are showing more than one animal and win grand champion for one of those animals they they get to sell two at the auction. One young lady reported that if she sells her hog she puts the money toward purchasing feed.

I’m a little confused on the auction part as turkeys seemed to have different rules than the number of hogs that can be sold at the upcoming auction. And yes, there are rabbits, and I have been following Keygan Rohrich for 3 years with his soft fuzzy bunnies. He is such a delight to speak to. He knows everything about rabbits and will gladly explain what it is like to raise and show a these adorable creatures.

Hope all you readers come out to enjoy the fair while it is going on this week.  See you at the fair! 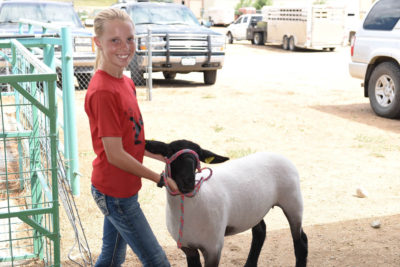 Rosalyne Cope with her wether -male lamb, Charbre. This is Rosalyne’s fourth year in 4-H. She belongs to the Hub Club 4-H. Rosalyne reports that training her lamb was hard in the beginning, but once she gained his trust is was easier to work with him. She also states the name Charbre in Irish means he who rides a chariot. 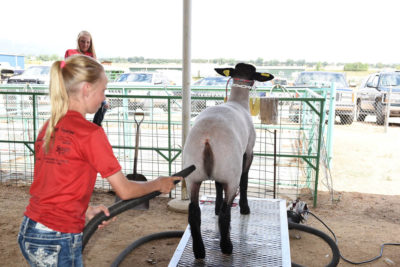 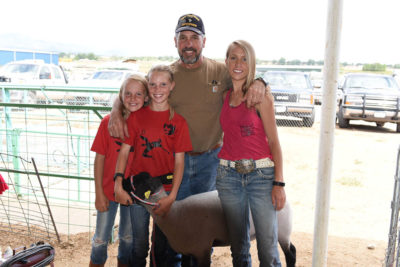 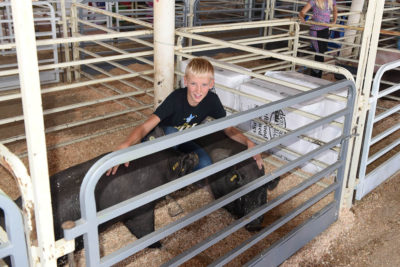 Kason Westphal with his hogs, Shotgun and Pistol. 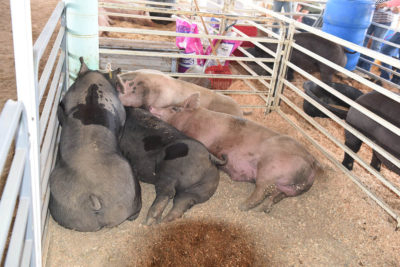 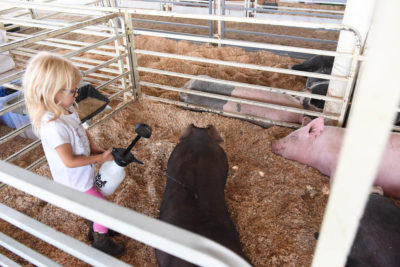 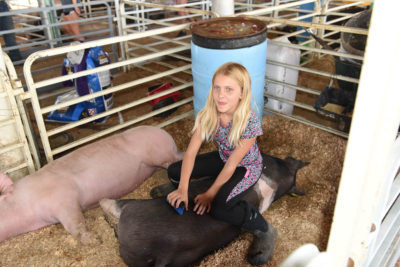 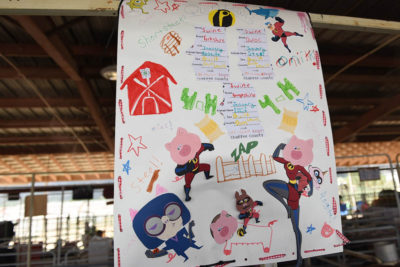 A creative 4-H swine poster designed by owners of the 3 pigs. 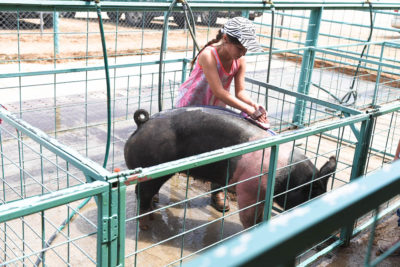 Emma the Hampshire pig being washed by her owner Maci Pridmore. Emma weighs in at 233 lbs. and is 7 months old. Maci is a member of the Mt. Shavano Rangers 4-H. 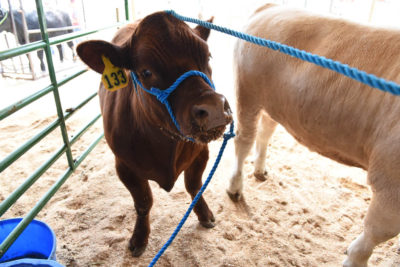 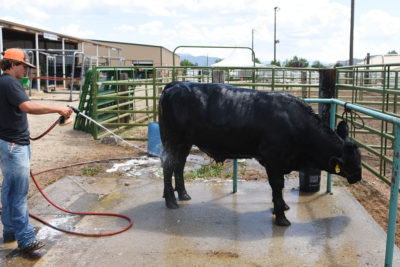 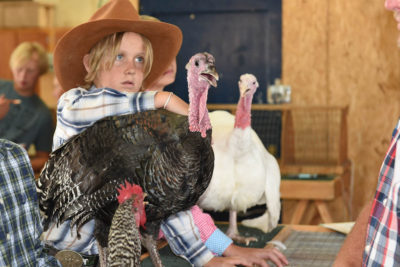 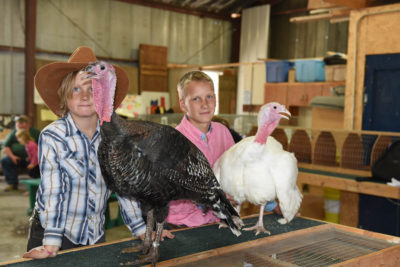 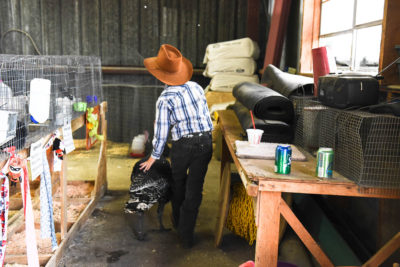 I got some pointers today on how to walk a turkey. 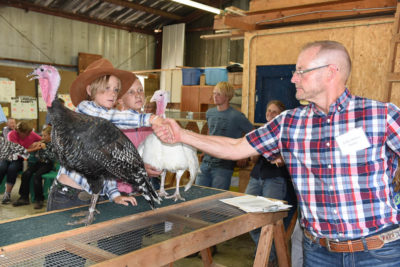 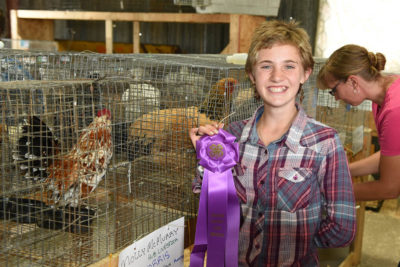 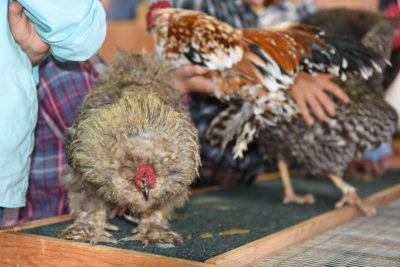 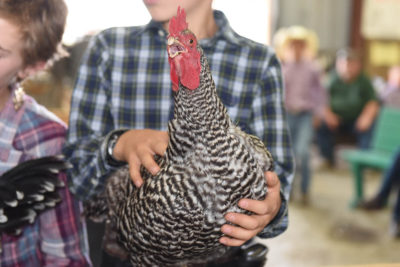 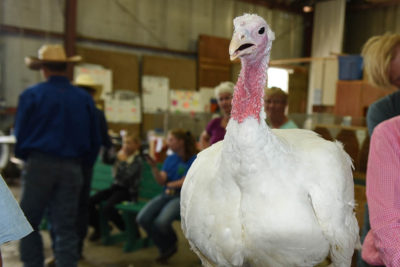 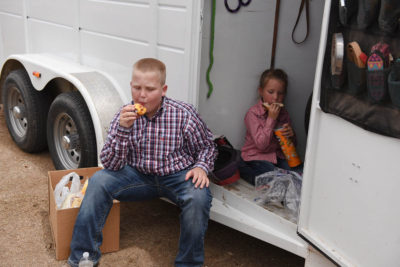 Keygan and Sidney Rohrich taking a lunch break before showing of the rabbits. This is Keygan’s 3rd year showing rabbits. His sister’s duck won grand champion earlier in the day. 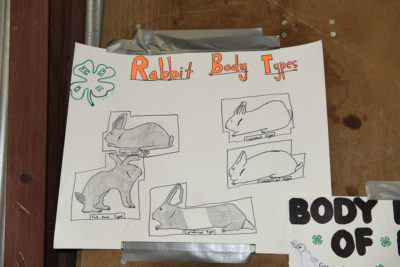 Body language of a rabbit. 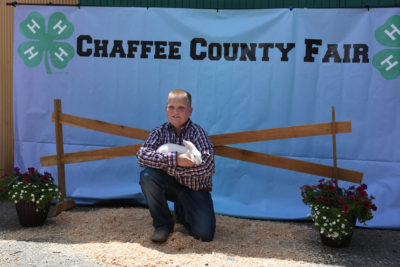 Keygan Rohrich and his prize rabbit. 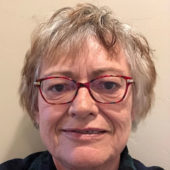