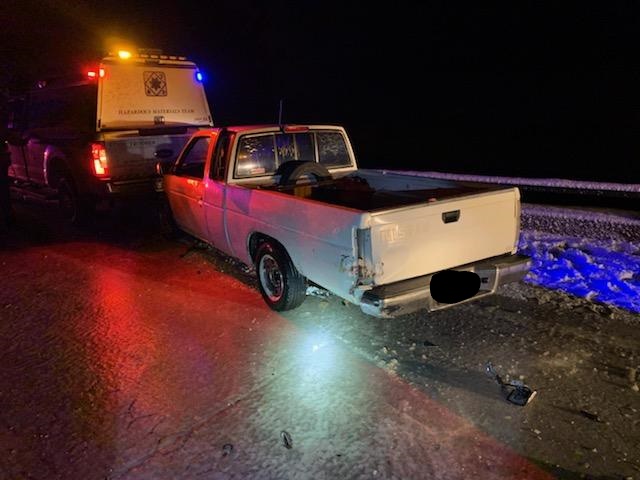 A warning from the Colorado State Patrol (CSP) today reminds the driving public about the fast-changing road conditions as storm after storm pummels the state making for treacherous road conditions. As Colorado road fatalities have continued to rise this year, the  state stands to close the year this week with death rates not seen in more than a decade. The causes; inattentive driving, driving too fast for conditions, drivers too occupied with their mobile phones, and drivers simply ignoring Colorado’ move-over laws. 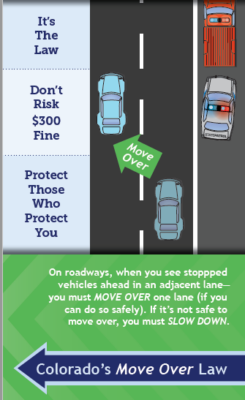 Despite recent warnings issued about the weather, traction and chain laws, and even the Slow Down, Move Over Law, six collisions with crash responder vehicles took place between December 25 through December 27 on I-70. In all but one incident, first responders were conducting a crash investigation of other drivers when they too were struck by a passing motorist.

“Road conditions can change in an instant and drivers need to be prepared to stop or navigate difficult conditions,” warned Col. Matthew C. Packard,  Colorado State Patrol. “Last year troopers around the state cited 482 drivers for violations related to tire and chain restrictions for vehicles of all types on our roadways. If you fail to prepare your vehicle properly, the crash you cause may not stop at property damage – it may take a life.”

According to the Emergency Responder Safety Institute, as of December 22, 2021, 63 deaths of first reporters have been reported nationally this year due to being struck on the roadside while working. Of those who died, 28 were law enforcement officers, the highest group accounted for, closely followed by tow truck operators (22).

“In each of these six [recent] crashes the troopers and CDOT worker were able to return home to their loved ones,” stated Col. Packard. “We know how lucky this truly is and we know that the next crash may not have the same outcome. Slow down in snow and icy conditions and for goodness sake, move over if you see roadside workers.” 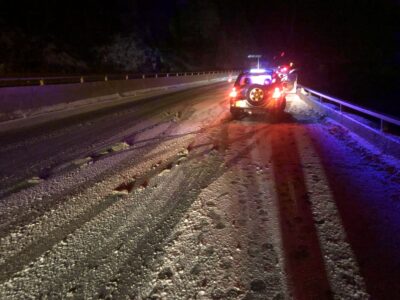 First responders have been hit by other cars driving too recklessly for the dangerous winter driving conditions this week. Photo: Colorado State Patrol.

Dec. 26, 2021 – Trooper was stationary on I-70 to protect towing operations that required a lane closure. Emergency lights were on and included an arrow stick. A Dodge Caravan crashed into the rear corner of the patrol car.
Dec. 26,2021 – Trooper was stationary on I-70 near milepost 129 in Glenwood Canyon handling a crash scene when struck from behind. The vehicle had improper tires and lost control on the icy roadway.
Dec. 27. 2021 – Colorado State Patrol Hazmat vehicle responded to a crash on I-70 in Glenwood Canyon that was blocking the roadway. A second vehicle lost control when it was trying to avoid the crashed car and hit the crashed car, pushing it into the patrol vehicle.
Dec.27, 2021 – Colorado State Patrol Hazmat vehicle was parked on the side of the road on I-70 as the trooper was investigating another crash. A Dodge Ram spun out of control and struck the side of the patrol vehicle. The driver of the Dodge Ram then fled the scene.
In addition, drivers traveling I-70, U.S. 285, U.S. 24, and any of the other two-lane mountain highways, should watch the weather forecast and prepare their vehicle. According to Colorado’s current chain law, all vehicles need to be prepared with adequate tires and equipment when traveling in Colorado during winter.

Chain law restrictions are announced through the Colorado Department of Transportation (CDOT). At a minimum, CDOT will notify the public on static and electronic variable message roadway signs. In addition, this information is regularly announced through 511 traveler information, the official CDOT travel website (www.cotrip.org), and media outlets.

Featured image: Accident Responders have found themselves the victims of accidents as travelers driving too fast for conditions have slammed into them. Photo: Colorado State Patrol.