A biggest ever for battery storage – but not for long

Tiny now, like a pebble, lithium-ion battery storage in Colorado is about to get very, very big. What other pieces of the emissions-free electrical jigsaw puzzle are needed?

The 13,500 solar modules sandwiched by hillsides of sagebrush, pinyon and juniper near Glenwood Springs capture the eyes. It’s the four shipping containers of lithium-ion batteries, capable of five megawatts of storage, that will briefly set a new high mark for Colorado. 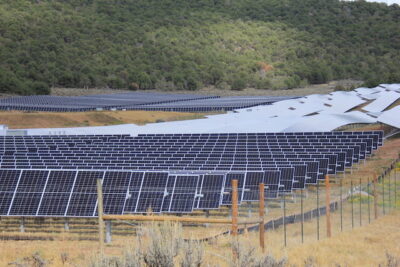 Battery storage is coming on in Colorado. This project narrowly eclipses the previous record in Colorado set four years ago. Late next spring, the 275 megawatts of battery capacity planned by Xcel Energy at Pueblo and in Adams County will dwarf this record of 5 megawatts. More yet will be coming after that.

We need storage to complement the intermittency of the renewables but also because this makes economic sense. This transition to an energy system with fewer emissions has so far slowed or stopped increased costs in the prices of electricity. If only we could be so lucky with organic food.

Storage capacity within Colorado will rise significantly in the next five years. Imagine driving on Interstate 70 across the Great Plains into Denver. In the city’s western suburbs, the highway rises slightly. In this analogy with battery storage, we’re still in the suburbs. Lying immediately ahead is the sharp rise to Floyd Hill with plenty of uphill beyond.

Mike Kruger, the chief executive of Colorado Solar and Storage Association, a trade organization, rejects this analogy. Instead of an uphill struggle, he describes a downhill glide. Lithium-ion storage will expand, he explained, because of rapidly declining costs that parallel those of solar panels a decade before.

In his view, we’re about to descend from Loveland Pass.

All of Colorado’s larger utilities plan significant storage but in somewhat different ways. Platte River Power Authority recently received 31 bids for various non-carbon generation and storage proposals in and near the four communities it serves in northern Colorado. For example, Estes Park, whose frightened residents had to flee in 2020 as two megafires approached, might need both storage and solar panels if power deliveries get interrupted.

Wildfire threat also figures into the solar and storage at the Colorado Mountain College campus near Glenwood Springs. Should outside power be cut off, students could shelter in place.

Colorado Springs Utilities, the state’s fourth largest utility, is soliciting bids for batteries with 400 megawatt-hours of storage to become operational in 2024. Utilities spokesman Steve Berry predicts the growing importance of battery storage as long as the technology becomes increasingly cost-effective, efficient, and reliable. 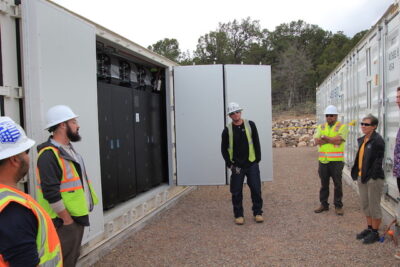 “Battery storage will help us better manage the intermittent characteristics of renewable energy, but it will also provide greater grid resiliency, help insulate customers from market volatility, and help us modernize our grid for emerging technologies,” he says.

We are also beginning – just beginning – to see batteries in homes and businesses. In a program called Power+, Holy Cross Energy (HCE) has assisted in placing batteries at 68 homes and businesses. Supply chain issues have 122 still on the waiting list. It is doing this partly to learn how to draw on these batteries to meet peak demands, such as when the snowmaking guns at Aspen and Vail power up as temperatures dive during November evenings.

Now come state and federal programs that Kruger describes as a “really amazing confluence of incentives” via tax rebates. A new Colorado law will award an income tax credit equal to 10 percent of the purchase price for storage systems purchased in 2023 and 2024. The systems are also exempt from sales tax. The federal Inflation Reduction Act provides an even bigger tax incentive of 30 percent.

In “The Big Fix,” Aspen-reared Hal Harvey and co-author Justin Gillis describe how historically, scaling up of industrial processes has caused prices of everything from Model T’s to computer chips to tumble. They call it “the learning curve.” The most recent examples were wind and then solar.

Cheaper lithium-ion batteries alone will not alone allow HCE and other utilities to realize their goals of 100 percent emissions-free electricity by 2030. We also need longer-term storage. Options include molten salt, hydrogen and pumped storage-hydro, the latter a technology used in Colorado since the 1950s that remains the state’s largest “battery.” Nuclear and geothermal are other options. All will take time to deploy; likely a decade.

For now, it’s time to charge the batteries.

Allen Best publishes Big Pivots, an e-journal from which this was extracted. See BigPivots.com.