During the Great Influenza, anyone who exited the train in Gunnison was immediately quarantined. This train and its passengers are pictured East of Gunnison (Photo Courtesy of Gunnison Country Times)

As the world deals with the spread of COVID-19, the newest global health crisis, it might be good to look back at how the country and Colorado has dealt with past health epidemics. In 1918, the world saw one of the deadliest outbreaks in history with the Spanish flu. According to the Denver Public Library, Colorado had one of the highest mortality rates in the country.

According to the Colorado Virtual Library, “In 1918 and 1919 influenza and its complications accounted for about a half million deaths nationally.”  In Colorado, between September and Dec. 1918 some 1,500 Coloradans had already died of influenza. Some 49,000 people, of the total Colorado population of 906,000 were infected.

The high mortality rates were attributed to the large population in Denver working as miners and the population of people living in Colorado who were fighting tuberculosis. At the time, Colorado was considered the best place in the country for people with tuberculosis, to recover their lung function.

Unfortunately for Colorado, having a large population with compromised lung function meant they did not do well when the Spanish flu or “Great Influenza” hit Colorado.  By June 1919, an estimated 7,783 people had died, with nearly 1,500 of those people living in Denver.”

The good health practices recommended by health officials advising the population on how to deal with the spread of the Coronavirus are not unlike much of the precautions that were taken for the Spanish flu: washing hands, avoiding contact with large groups of people, coughing in elbows, plenty of rest, etc. Denver’s Manager of Health in 1918 Dr. William H. Sharpley advised the public on rules of the flu after declaring a house in which the first fatality occurred in Denver, under quarantine. 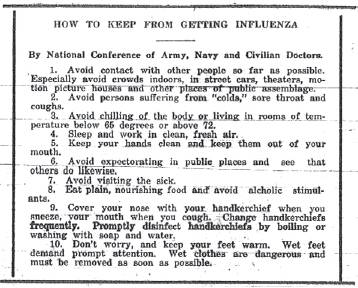 “As the epidemic grew, Sharpley ordered schools, churches and places of amusement to close, but failed to restrict public gatherings and the use of street cars.  The flu spread across Colorado and hit small towns hard, many with few doctors and medical resources.

Some towns, like Gunnison, avoided the high rate of infection by essentially quarantining the entire town for months,” says the Colorado Virtual Library. It avoided the Spanish flu by basically declaring a “quarantine against the world.”

The Colorado Virtual Library continues, “By early 1919, the epidemic began to wane and many towns began to reopen schools. Ultimately the 1918-1919 influenza pandemic accounted for more deaths than suffered by United States troops in battle during World Wars I and II combined.”

The Center for the History of Medicine at the University of Michigan explains, “By the mid-1880’s there were two railroads operating in Gunnison, linking the town with Denver, Salida, Durango, Montrose, Grand Junction, Crested Butte, Lake City, and even Salt Lake City.”

“New cases were appearing in Sargents, Colorado, although on a reduced scale; the News-Champion surmised that nearly everyone in the town had already been stricken with influenza. Rail workers reported that Salida, a mountain pass town 65 miles to the east, had 200 cases, with 40 of them appearing on October 15 alone,” says the Center for the History of Medicine at the University of Michigan.

“Two weeks later that number had reached 500. The newspaper acknowledged that this information was merely rumor, but nonetheless added that it indicated just how dangerous the disease was,” says the Center for the History of Medicine at the University of Michigan. 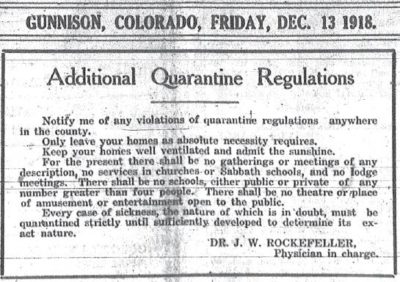 A recent article in the Gunnison Country Times, addressed the steps the town of Gunnison began to take;  “Gunnison, on the other hand, took early and severe precautions. On Oct. 18, with no cases yet in Gunnison, the local Board of Health closed all schools and churches and banned parties and street gatherings. Although a hardship, most people were very supportive; there were reports of the flu in Parlin, Doyleville, Sargents, Montrose and Salida.”

By November 1918, the Gunnison Country Times reported that Gunnison still had not had a case of the Spanish flu. “On Nov. 1 [1918], with the flu raging around Gunnison and still no reported cases, F.P. Hanson, county physician, decided to quarantine the town.”

The Gunnison Country Times shared Dr. Hanson’s official statement issuing the quarantine, “In order that our lives and those of our families may be better safeguarded, I have caused a strict quarantine to be placed on Gunnison County against the world. Barricades and fences have been erected on all main highways near the county lines; lanterns at night, and signs by day warning autos to go thru the county at once or submit to quarantine.”

Dr. Hanson continued, “Any person may leave the county at his will: None may return except those who will go into voluntary quarantine at a place designated by this office. Any person willfully molesting these barricades or deliberately endeavors to break this quarantine will be dealt with to the fullest extent of the law.”

Dr. Hanson’s quarantined saw success in 1919, as the Town of Gunnison, reports the Gunnison Country Times, “The protective sequestration ended across Gunnison County on the morning of Wednesday, February 5.”

Public health officials are beginning to ask the question “Could — or should — the government impose a mass quarantine on an America City?”