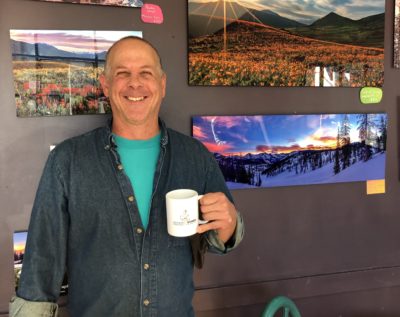 Mike Pollock, council-elect representing Ward 2 poses for a picture in front of art hanging at the Gathering Grounds (Photo by Taylor Sumners)

As part of our “Conversations with the Candidate-elect” interviews, Ark Valley Voice spoke with Mike Pollock, the Salida City council-elect representing Ward 2.  The five Salida candidate-elects, who ran unopposed, will take their positions following the Nov. 5 general election.

Pollock, a resident of Salida for about 15 years, excitingly made the decision the day before petitions were due, to run for Salida City Council as the Councilman, representing Ward 2.

Pollock graduated from Northwestern University outside Chicago, Ill. with a degree in music, playing the trumpet. He currently plays in three local bands, and people may also know him from the Salida Brass, Fourth of July festivities, or from Groove Farmers or Mo’Champipple & the Miso Horns.

Pollock said he hopes to represent old and new voices of the community.

“Most people say it’s being a ski town or a whitewater town, and those are great things. But for me, as a musician, it’s the music that comes through too. In fact, there are so many artists in town,” said Pollock while pointing out musicians in the coffee shop where we met to talk.

“Salida is such a family area, a rural culture, where the people are just so nice. I think that’s what draws most people here, and the community is just so welcoming.”

“Music has been a huge [role]. I have three rehearsals every week, three hours each. I put a lot of time into music. I used to be in the Community Garden and was really involved with that for three or four years when I first moved here. Then I served on the board for the Foodshed Alliance for several years, which later involved the farmer’s market. I helped start the farmer’s market while working with them.

“I am a self-employed carpenter. In addition, I also worked with kids at the high school the last three years on building projects.”

“P.T. Wood had mentioned to me that Mike Bowers had been the pipeline to the community members who have been here a long time. I am afraid we won’t have that pipeline without Bowers. I hope to represent that need and be a voice for people who feel that maybe they have been left out of what has been going on in town. We are getting so many new people from an urban culture, which I find is clashing with the rural culture [in Salida]. I hope to hear from those people as well … opening up to hear what they have to say, and representing them on Council.

“It’s great to come in and not have to spend money on an election [by running unopposed]. But the downside is that we didn’t have [public] interest. I get the sense that what is happening is almost irrelevant to a lot of people, that they do not care. They know [decisions made by the council] will affect them, but they don’t feel like they can impact it at all or be a part of it, really which is sad.”

“I’m a carpenter, so for me, I immediately think apartments. We keep building because people are wealthy enough that are coming here, and there are enough of them, but carpenters will take that job where they can make more money building custom houses. We haven’t had the workforce and builders that want to work on figuring out affordable housing, because why would you? There are tons of houses out there that are mostly empty all the time, with gorgeous views and all of that, yet they sit empty, and it’s sad.

“So what I think it comes down to is creating an incentive to address the issue with the professionals that are here and can do it, because it’s not easy to build a house. We have fewer and fewer people who want to do that work too. It’s hard work. I hope my background can be a contribution in the future [Salida City Council] conversations.”

“Reach out to people you don’t know and volunteer for things. It’s not just being here for what you can ‘get’ out of here. It’s about how you can contribute to a town and a community. I grew up in between my farm friends and my city friends, so I am lucky in that way. I lived most of my life in rural America, and it’s great because you meet the coolest people who have lived there. Who are smart and very interesting, with a lot of success, but who didn’t do it in the greater world. They stayed right where they were born. Many times, in urban areas, there isn’t as much community, it’s more of an aggressive ‘I just got to get around you’ sense.”

“I’m a big one on collaboration. Anyone in a band knows this one. It’s all about collaboration. If you are not a good collaborator, you won’t make it in a band. Collaboration is when somebody says something, you can’t be offended. It’s a dance between listening and speaking. If you have a dance, you need a partner that pulls back, if your partner doesn’t pull back, they don’t have a mind of their own.

“Much like in a band too, if you’re collaborating and putting the time in and listening, you will have fewer soloists. Music has been a great training ground to be humble, play a role that isn’t dominant, and work with others to achieve something. Teamwork. I think music education is underestimated sometimes when people question ‘what are you going to do with a music degree?’”

“A lot of times, I am just coming from a rehearsal and can’t go to sleep because I replay the music in my head. I will think about new ideas, and I will stay up writing pieces. I don’t have many worries about the city necessarily, but I am a peacemaker. I don’t like people to fight, and I worry about too much fighting happening. Sometimes it sounds like two voices fighting, left and right, but no, it’s the extremes that are fighting. The middle people are sensible, but that is not what is being covered in the news.”