The facts confirm that Americans are living in historic times. Thursday, the United States House of Representatives voted 232 to 196 to proceed with rules on the impeachment inquiry into President Donald Trump. It fell mainly along party lines, representing the political polarization of the country. 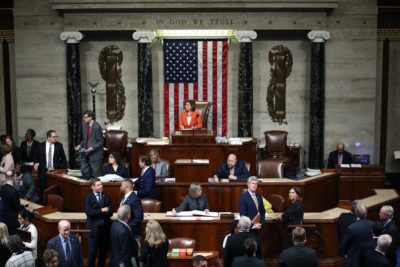 The House of Representatives on Thursday as it takes the vote to approve rules of impeachment. (Photo courtesy Chicago Sun-Times)

The vote signals a critical new phase in the investigation, coming on the heels of testimony by career public servants who have described quid pro quo pressure by the president and several members of his team on the country of Ukraine. They describe a shadow foreign policy designed to force Ukraine’s new president, Volodymyr Zelensky, to provide dirt (real or manufactured) on Trump’s perceived political opponent Joe Biden, running as a 2020 candidate for president.

Critical military aid, already approved by Congress to help Ukraine in its defense against the Russian invasion of its eastern territories, was delayed, critics say to force Zelensky to cooperate.

The 232 to 196 vote was taken to approve a resolution setting out rules for an impeachment process. Rules that Speaker of the House Nancy Pelosi says are more lenient than the rules for either of the past two impeachments inquires of a sitting president in the modern era. A year out from the 2020 elections, the inquiry promises to take up a good deal of the public’s attention.

Democrats resisted taking the vote for months. Republicans, who have spent the past two weeks during the closed-door interview process (interviews which appear to confirm what the whistleblower reported) complaining not about the startling revelations, but about the process. But when the vote was called, they then reversed themselves and voted against the public process.

Both parties are in uncharted territory. It appears Republicans are no longer Constitutional conservatives. Their active support of an imperial presidency has been called “greatly concerning” by Rep. Ted Deutch (D-Florida), something that our founders sought to mitigate when they purposely balanced the powers of the federal government among the various branches of government. HE went on ot add” Defending the constitution has never been a partisan issue.”

Republican loyalists have begun to question the patriotism and loyalty of those career public servants, including former and current military officers, State Department and National Security Administration officials, who have stepped forward to provide credible testimony of the actions of the office of the president. 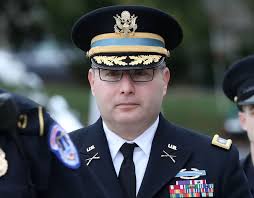 Lt. Colonel Alexander Vinman arrives at the U.S. Capitol Oct. 29 to testify in hearings regarding what he heard during the July 25 call between President Trump and Ukraine President Zelensky. (Photo courtesy Washington Post)

In a case of catty theater, Fox News host Laura Ingraham, herself the parent of two children adopted from Russia, went so far as to question the patriotism of NSA Russian expert and active military Lt. Colonel Alexander Vinman, who testified earlier this week. His Jewish family immigrated to the U.S. from Ukraine (then part of the Soviet Union) when he was just 3. He has served 25 years in the U.S. military, including tours in Iraq, where he was wounded.

The United States Constitution is a brilliant piece of legal work that divides authorities equally among the branches of government. Each branch — executive, judicial and legislative — has its own roles.

For instance, while the president is the commander in chief, only the Senate can confirm judges, while the House of Representatives is given the power to conduct impeachments. The Constitution reads: “The House of Representatives … shall have the sole Power of Impeachment. … The President, Vice President and all civil Officers of the United States, shall be removed from Office on Impeachment for, and Conviction of, Treason, Bribery, or other high Crimes and Misdemeanors.”

Whatever happens next may well reshape the nation’s political landscape.