Today in Ukraine, President Volodymyr Zelensky went on national television and told his people that he has received word that the possible Russian attack on his country will be on Feb. 16.

In his address, he declared Wednesday, Feb. 16 as a national unity day, calling on Ukrainians to raise the flag, and post ribbons in the national colors — yellow and blue  — as a sign of unity and freedom. He told his people that the nation’s police and military will be on a heightened state of alert, around government buildings, and monuments. He called on the country’s oligarchs (many of whom flew out to sure safety on their private jets) to return and stand by their workers. 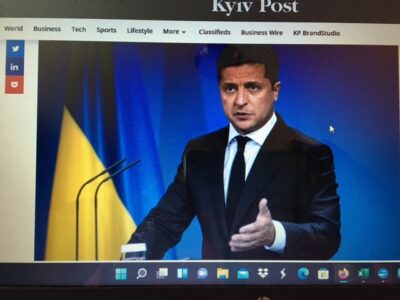 Zelensky is in a difficult position  — he leads a democracy where there are opposition parties, but he is also trying to protect his country’s economy. He needs to show strength, but he also knows that his countrymen have to prepare. He’s facing off against the biggest country in the world.

No one knows what is in Russian President Vladimir Putin’s head; whether he’s decided on an attack day, whether he’s bluffing, whether he simply wants to keep the West talking and guessing. It could begin with a full-scale invasion from all sides, or with a false flag operation staged for the home audience to convince Russians that his actions are justified. Since he isn’t answerable to anyone, no one knows.

But as Ark Valley Voice pointed out in this December 2021 article, Russia’s past actions are a window on future performance: https://arkvalleyvoice.com/the-answers-to-what-russia-is-doing/

While the past administration may have downplayed the actions of Russia, the current administration is not.  The western intelligence assessments have been ringing multiple alarm bells.  The U.S. Embassy and European embassies, all except France, are pulling their embassy personnel. While diplomacy continues with U.S. ,President Biden was  on the phones this past weekend with Russia and Ukraine, with German Chancellor Olaf Scholz and meeting with Ukraine and Russia today; the talk continues.  But none of them should be fooled.

Our Voice: American Security, Democratic Principles and Why We Do Care About What Happens to Ukraine

Ukraine is a large country, about the size of Texas. It is surrounded on nearly all sides now by more than 130,000 Russian troops, on the eastern borders, and across the south in Crimea which Russia seized from them in 2014. On the north, Russian troops are joined by Belarus forces. To top it off, Russian military vessels have created a blockade on its southern coast on the Black Sea. The dramatic buildup of resources, both in capability and numbers, has accelerated in recent days.

If Putin makes this decision, it will be bloody. The Ukrainians realize the value of their freedom. They lived under Soviet rule. They are a sovereign country. They have sovereign rights. They are a democracy. They’ve been fighting for their freedom for the past eight years. They are out-manned and out-gunned. But they will resist.

If Putin decides to attack, this would be a realignment of the world order. It is a direct affront to keeping the peace of Europe; the most serious threat to world peace since World War II.

The threat this poses to democracy is global; other authoritarian regimes are going to look at how the world responds to this. If there is a response vacuum — there will likely be an equal push forward by authoritarian threats around the world.

Editor’s Note: To be completely transparent; I have worked extensively on intercountry adoption policy with the Ukrainian Embassy in Washington D.C. and know many staffers of the Ukrainian government, including those who have rotated back home; wonderful people, great families, dedicated to democracy. Our son (a 2004-2005 Rotary Exchange student in Alusta, Crimea) was posted to our embassy in Kiev in 2020 from the Dept. of Energy. The family of our Rotary Exchange student “son” is stuck in Crimea where he grew up, while he and his young family are in Kyiv. Note also that AVV articles titled “Our Voice” are editorials.