A Shadowy Group: A combination of Fantasy and Militancy

Editor’s Note:  Emily Brake of Boulder County has refuted her involvement in US Election Integrity Plan in the following statement:

“At the recommendation of Colorado Clerks & Recorders on both sides of the aisle, our committee & myself have encouraged citizens to become ordinary law-abiding election judges and poll watchers, like both major parties do every election cycle.  I am not a member of USEIP. I have never been a member of USEIP groups. I did not approve, authorize, write, nor create the alleged content for the alleged USEIP websites, flyers, platforms, and/or communications that is posted on the Colorado Times Recorder website. “

Two other sources confirmed to Ark valley Voice her involvement in USEIP before we published this article. Her reference to “committee” above appears to refer to a GOP election integrity committee that is not USEIP.

A few weeks, ago Ark Valley Voice reported on a shadowy group calling itself the U.S. election Integrity Plan, (USEIP) with a shiny new website, and a void of information on the site about who started it, who runs it, how it is funded, and what its real purpose is.

When AVV was first alerted to this Colorado-based group a few weeks ago, we thought it was a curious, but perhaps isolated development. Since then, USEIP has announced a plan to go door-to-door in Colorado “investigating election fraud”, which would constitute federally criminal voter intimidation. 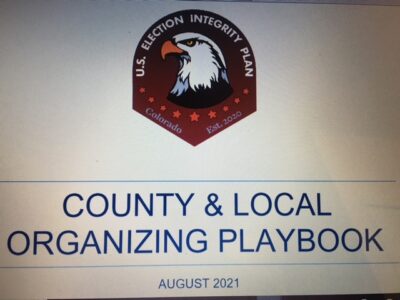 The cover of the US Election Integrity Plan Playbook.

The election fraud conspiracy group claims to have been created as a nonpartisan exploration of whether or not there was any fraud in the 2020 election (according to their site, they just want to clear up all the fuzziness about the election results — as if there were any). But a look inside their playbook appears to indicate that its real goals may lie elsewhere.

The playbook released by the group says it was formed in Nov. 2020 “inspired by Dr. Douglas D Frank and created by three ‘Supermoms of Colorado’.” Frank (a part-time math teacher and uber Christian who first gained notoriety by claims that COVID is a hoax) has a new claim: he believes he’s uncovered an algorithm that proves that Colorado’s 2020 election results (along with those in many other states) were rigged in favor of President Biden.

So naturally, word about this “truth” must be spread. The playbook sets up steps that enhance the state strategy of running large numbers of candidates at the local level to flood school boards and county board positions and create local majorities of those who believe the big lie that the 2020 election was stolen. The playbook dedication credits such conspiracy theorists as Mike Lindell “the pillow guy” and Col. Shawn Smith for their “truth-telling” heroism: https://useipdotus.files.wordpress.com/2021/08/useip_playbook_aug2021.pdf

The 29-page county handbook makes interesting reading. It of course completely refutes the website’s claims of nonpartisanship. Right on page two, it makes its goal clear: “We want you to bring your skills, talents, and God-given passions to the movement to restore our Republic.”

Really. Which republic would that be?

One of the co-founders of USEIP appears to be a woman named Ashe Epp, who, it is claimed, was at the Capitol for the Jan. 6 insurrection. According to the playbook, they already have organizations in half of Colorado counties, including every Front Range metro county. 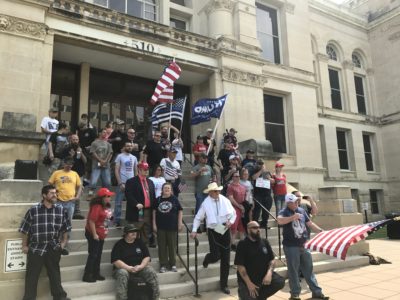 “The objective is to build your county coalition and grow your team. Coalitions are very important to us. You see, communists are very good at marching in the same direction because their meals depend on it.”

They appear to refer Democrats and Unaffiliated voters as communists. The playbook trains those who join the effort on how to spot people who aren’t sincere, or who might be spies, including how to do security checks on them before allowing them in.   It goes on to declare “If we can agree on the Bill of Rights, we can debate everything else later. The secret our enemy doesn’t want you to know is that pretty much everyone agrees on the Bill of Rights.”

At a Fremont County Election Integrity Forum last week, called for the purpose of educating the public on how elections actually are done,  The Colorado Times Recorder (CTR) documented Smith’s harassment of Fremont County Clerk and Recorder Justin Grantham (a Republican). It provides a first-hand look at the USELP’s tactics.  Smith, who as far as is known has no experience running any kind of election, called the Fremont Clerk a liar and went into a litany of conspiracy theories (all of which have been repeatedly debunked) involving the county, the state, and the national elections.

Further research has revealed that the USEIP appears to have connections both to the Three Percent right-wing militia group and to the Colorado GOP. The USEIP organizer on Colorado’s Western Slope is reported to be Cory Anderson (who has documented links to the Three Percent group.) His wife is the first vice-chair of the Mesa County Republican Party.

The playbook is a county-level guide to intimidation, and it doesn’t seem to matter if those they plan to harass are Democrats or Republicans, or county clerks or election volunteers. The CTR did a piece on them last month, reporting connections to the conspiracy theory social media group Q-Anon. (AVV has not independently confirmed that report.)

CTR reporter Erik Maulbetsch, reported August 11 (https://coloradotimesrecorder.com/2021/08/co-gop-selects-member-of-qanon-linked-conspiracy-group-that-organized-jan-6-caravan-as-its-election-integrity-chair/38507/) that Emily Brake of Boulder County who is also part of USEIP was selected by the CO GOP to head its new committee to “safeguard” the state’s elections. The article goes on to say: “Since Brake was appointed to an “Election Integrity Operations Action Committee,” she has joined Epp and others to give presentations to local Republican groups.” [See Editor’s Note above regarding this reference.] 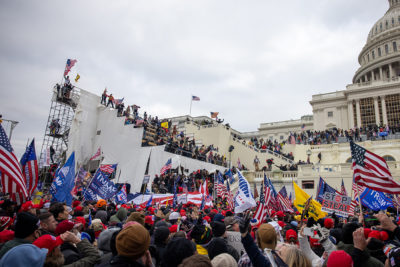 In fact, it appears that USEIP coordinated a caravan of Trump supporters to go to the Capitol on Jan. 6. Another member of USEIP who has publicly said he went to the Capitol is Mesa County’s Tom Bjorklund, who worked for state senator Ray Scott (Grand Junction) and former congressman Tom Tancredo (who is apparently getting ready to declare himself a candidate for office again.)

Bjorklund does not appear to be worried about discussing his presence at the Jan. 6 rally,  since he continues to claim that it was “antifa” at the Capitol causing problems.

The litany of conspiracy theories and the purposeful dissemination of untruthful information spills into social media to the shadowy platform known as Telegram.

USEIP is not only on Telegram; but it can be reached from their website. For the uninitiated, the Telegram platform is full of conspiracy theories about the election and includes Q-Anon taglines like “We Are the Plan.” If you have Telegram, you can access the channel directly from the USEIP’s website. The channel also includes links to websites and blogsites supportive of election conspiracy theories in Colorado and other states. The Telegram channel may be run by USEIP co-founder Ashe Epp, since messages are forwarded from like-minded conspiracy sites by “Ashe in America.”

The USEIP has also linked on Telegram to the online “America First Audit” groups spread across all 50 states. It is reported (but AVV has been unable to independently confirm) that more than three thousand people are members of that specific Telegram site. It is devoted to the conspiracy that U.S. election results are fraudulent and require the same sort of vote audits that have been going on in Arizona for months.

As Dorothy said in The Wizard of Oz, “Toto, I don’t think we’re in Kansas anymore.”

Editor’s Note: The performance put on by Smith, with the litany of grievances and election fraud falsehoods, brings to mind the Ku Klux Klan candidate David Duke.

Part II: Next week — Two Americas as we approach the 2021 election.