An unsolved math problem on the Colorado River 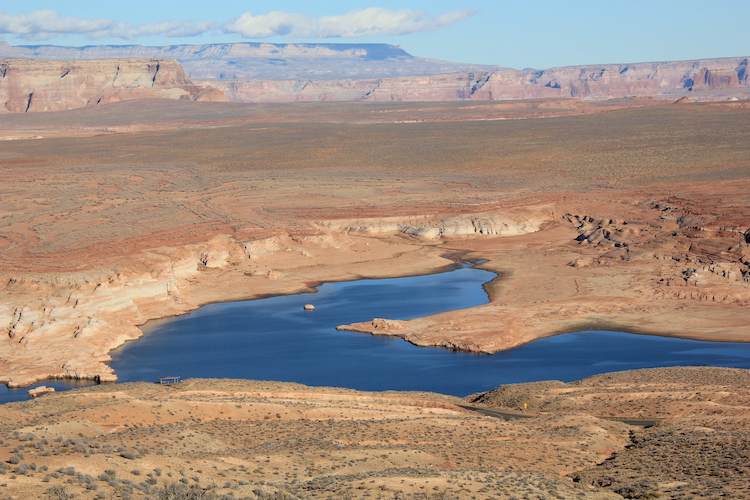 Spring runoff last year in the Colorado River Basin was a bust, with snowpack of almost 90 percent of average reduced to a 30 percent inflow at Lake Powell.

Nobody yet predicts another bust this year. Maybe a meteorological “March Madness” will compensate for last year. While we wait, water managers talk about “the math problem.”

The gap between water flows and demands in the Colorado River is enormous and likely to widen. The dysfunctional equation begins with 20 million acre-feet, the average annual flows assumed by the Colorado River Compact that was crafted 100 years ago by delegates from the seven basin states.

This cheerful assumption was based on early 20th century flows. It was made with almost willful disregard of evidence available even then of the river’s lesser flows during the prior half-century. The delegates who met at a lodge near Santa Fe in 1922 were determined to yoke all irrigable acres into agricultural production.

In this math problem, another key number is 12.3 million acre-feet. That’s been the river’s average flow in the 21st century. Some of this reduced flow seems to be entirely natural, what we call drought, if exceptional in duration.

Something else has been going on. Temperatures have risen 3 degrees C altogether since 1970. By some estimates, half or more of the reduced flows can be attributed to this global warming effect. This warming explains the grand larceny in the Colorado River, decent snowpacks reduced to a shrug in the Utah desert because of evaporation but also because plants need more water. Too, baked soil sops up water.

We can’t flip the switch on global warming, and it’s almost certain to worsen, the temperature rise doubling or tripling, as Colorado State University’s Brad Udall warns. He describes what is occurring as aridification. Unlike drought, it’s not temporary.

This brings us to another number for this Colorado River Basin math problem: 11 million acre-feet.

That’s the number cited last week at a University of Utah conference about future flows of the Colorado River. “The best climate scientists in the world say we will be lucky to have 11 million acre-feet,” said John Entsminger, general manager of the Southern Nevada Water Authority, the agency serving Las Vegas.

To recap this math problem, the Colorado River Compact assumed 20 million-acre feet, the reality has been 12.3 in the last two decades, and we’ll end up with 11 million-acre feet—or conceivably less.

“Every new use will have to be mitigated by someone, somewhere, using less water,” Entsminger added.

That’s not entirely right either. We all will have to use less water. Keep in mind that not one drop of the Colorado River gets to the Sea of Cortez.

Cinching of the water belt has been underway from Mexico to Colorado. It’s not happening as rapidly as needed, though. Consider the rapidly emerging walls of Glen Canyon and the dam that creates Lake Powell. Despite emergency releases from upstream reservoirs in Colorado and Utah last summer to bolster Powell, the water levels last week dipped below 3,525 feet.

That elevation is arbitrary but a loud warning that a further decline of 35 feet leaves Glen Canyon unable to generate electricity. Recent modeling by the U.S. Geological Survey shows a 25 percent risk. If —or perhaps when—that happens, municipalities and cooperative members who get power from Glen Canyon will still get electricity from elsewhere, but it will cost more. That includes Holy Cross Electric.

Long term, this worsening situation of subpar runoff in the Colorado River matters to well more than 90 percent of Colorado’s population. The Colorado River and its tributaries deliver half of Front Range water. Even the easterly flowing rivers in Colorado that pass through more distant, less citified places, Sterling and La Junta, carry water augmented by diversions from the Colorado River.

Much remains to be worked out. Within Colorado, agriculture uses 80 percent to 90 percent of all water. Farmers and ranchers who own the more senior water rights, not subject to compact limitations, have served emphatic notice that their water will not be the answer to the math problem.

Another problem is the compact clause that puts the upper basin states—Colorado, Utah, New Mexico, and Wyoming—on the hook for diminished flows. It says they “will not cause” the flows at Lee Ferry, just below Glen Canyon, to be depleted below 75 million acre-feet of water over a rolling 10-year average. The upper basin states cannot do this alone. The risk must be shared.

This sounds gloomy. That said, the seven basin states, Mexico, and the sovereign tribes who collectively own about 20 percent of the basin’s water have yet to throw rocks at each other. They are talking. They just haven’t solved this math problem.

by Allen Best, published with permission.

Featured image: A nook of the vast shoreline of Lake Powell showing the reservoir depletion. It is fed by the Colorado River. MU