Anderson campaigns for a nonpolitical SOS office in Republican primary

Pam Anderson swung though Chaffee County last week in hopes to seal her bid as the Republican nominee to face Democratic Secretary of State Jena Griswold in November.

The former Jefferson County Clerk and Recorder announced her candidacy in November 2021 and in the upcoming primary, faces Mike O’Donnell, an Australian immigrant and nonprofit business loan advisor who lives in Yuma County, as well as Tina Peters, the Mesa County Clerk who has been indicted for security breaches in her county’s election system, related to her contention that Donald Trump won the 2020 election.

Among the three, O’Donnell is the only candidate lacking experience in administering elections. On the other hand, Anderson says she is the only candidate in the race who is certified as both a federal and state election official. She earned her federal certification from Auburn University, and holds a Masters in Public Administration from CU-Denver. 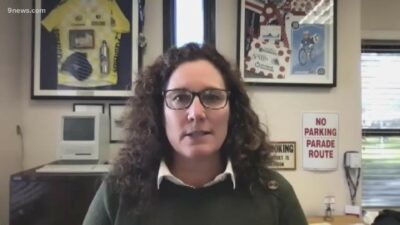 Anderson, who is also the former Wheat Ridge City Clerk and former executive director of the Colorado County Clerks Association, says she wants to run the Colorado Secretary of State’s office as a professional, nonpartisan office that focuses on technical expertise. In her experience working with clerks, she says she saw “a disturbing trend” toward politicizing the office, as well as considerable turnover.

The Secretary of State’s office has two major functions: overseeing election administration and operating the state’s business registration division. Until recently, the role was relatively nonpolitical. The 2020 presidential election changed that, amid unproved and lingering claims of widespread fraud that put Joe Biden in office.

Anderson says the 2020 election was fair and accurate. She holds that view as a Republican, contrary to some claims that Colorado’s voting systems have been influenced/produced by foreign governments. No certified voting system in Colorado (Dominion and Clear Ballot) has software or firmware developed by a foreign government.

Anderson is a proponent of paper ballots because “they’re very important to voters, first of all,” and that a voter validates their ballot before sending it in, and there is a hard copy record of the votes cast. According to campaign literature, she wants to build more safeguards against voter fraud and “end ballot abuse” by prohibiting electronic voting machines and installing ID verification requirements.

She says if elected she wants to continue to improve what she sees as a good system in Colorado, and to keep elections fair, accurate and accessible. That includes expanding audits statewide and ensuring that local election officials are trained and certified. She is against federal takeover of elections.

A lifelong Republican and daughter of a police officer, Anderson grew up in Ventura County, Calif. “It’s Ronald Reagan Country,” she says, admitting to being a presidential library nerd. As a conservative, she says “’trust but verify’ pretty much informed my worldview.”

The political process continues to fascinate Anderson. “It just got into my blood,” she says of being an election official. “It’s my life’s work.”