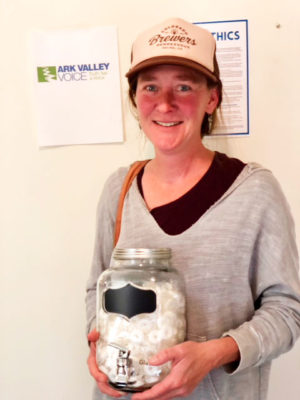 Of the hundreds of people who stopped by the Ark Valley Voice’s booth during the April 28-29 Chaffee Home and Garden Show sponsored by the Salida Sunrise Rotary Club, four who registered for prizes have been selected as winners.

Receiving Ark Valley Libation Society drink cards are Savannah Watkins, Kevan Lyons and Bill Lehmkohl. Winning the “Guess the number of mints” in the jar competition is Sara Ward. The winner’s guess had to be closest to the jar’s contents of 208 mints, without going over.

Two people submitted the winning guess of 200 mints, and Ark Valley Voice did a drawing between the two to select Ward’s name as winner.

“I’ve never won anything,” said Ward, arriving to pick up her mint jar. “So I had to come and get it right away.”