Director Sam Ebersole introduces his documentary about the Arkansas River to a capacity crowd at Salida SteamPlant (photo by Joe Stone).

The Upper Arkansas Water Conservancy District sponsored a screening of “The Arkansas River from Leadville to Lamar” July 18 at the Salida SteamPlant Event Center, and the film attracted more people than the SteamPlant theater could accommodate.

Because people were turned away, Chelsey Nutter, projects manager with the conservancy district, said a second screening will be scheduled, probably after Labor Day.

Draining 28,000 square miles, the Arkansas River basin is the largest river basin in Colorado, and the film characterizes the river as “one of the hardest working rivers in the country.”

In the film Pritchett points out the diversity of water uses that the Arkansas River makes possible – municipal, recreational, ecological, industrial and agricultural. He also discusses the less tangible cultural values afforded by water.

When the film ended, Bob Hamel, Brian Sutton, Scanga and Felt fielded questions from the audience. Hamel is executive director of the Arkansas River Outfitters Association and serves on the Arkansas Basin Roundtable. Sutton works for the Colorado Division of Water Resources as the local water commissioner. Felt serves on the boards of the Upper Ark and Southeastern Colorado water conservancy districts.

Asked about how climate change will affect water resources, Felt said changes in the timing and amount of precipitation are concerns and that increasing water storage capacity can help address these issues. He also advocated forest management to ensure healthy forests, which promote better absorption and recharge of water from precipitation.

Scanga pointed out that the Arkansas River basin has always had variability in precipitation with “periods of extreme aridity,” agreeing with Felt that additional storage is needed to guard against drought.

Scanga and Felt both mentioned underground storage as one of the most promising ways to expand storage capacity, in part because no water is lost to evaporation when it is stored underground. In recent years the Upper Ark district has initiated a project to store water in the alluvial aquifer beneath Trout Creek Park near Johnson Village.

When attendees expressed a desire to see more water conservation, panelists again pointed to the need for increased storage capacity. “It has to be coupled with storage. That’s the biggest hurdle right now,” Scanga said, pointing out that, without a place to store water saved through conservation, the water simply flows downstream instead of being available for later use.

One attendee mentioned the CB Ranch in Coaldale, which was purchased by Security in order to change the ranch’s irrigation water rights to municipal uses. She said the fields had turned brown and Hayden Creek had dried up.

Sutton said Security hasn’t yet taken the CB Ranch water. “The main change on Hayden Creek is the fire. The majority of problems are from the fire and the drought.”

One attendee asked about the Arkansas Valley Conduit, which was mentioned in the film.

Scanga said the conduit is part of the Fryingpan-Arkansas Project, which was authorized in 1962 and is intended to supply water water from Pueblo Reservoir to downstream communities, where “the drinking water quality is awful” because of shale formations that leach selenium and other minerals into the water.

The documentary was produced by Sam Ebersole of Colorado State University ‒ Pueblo, and the Colorado Water Conservation Board and Arkansas Basin Roundtable provided funding for the film.

Anyone who wishes to view the documentary can stream it through the Ark Valley Voice website.

Water Talks: When in Drought – The Importance of Water Storage 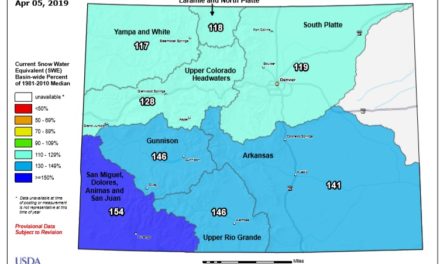 Water Talks: The Crisis of the Colorado River System

River as teacher: The formation of watersheds, rocks and stewards of the land