As above, so below: Will woes on the Colorado River come to roost on the Arkansas?

The playground that flows through Chaffee County delivered the goods this summer, with fat waves and tourist dollars churning out what Bob Hamel calls a banner season on the Arkansas River.

“If it’s a good rafting year, that drives the economy,” says Hamel, Executive Director of Arkansas River Outfitters Association and who sits at the Arkansas Basin Water Roundtable. “Everybody I talked to was up.”

The number of visitors to the 143-mile Arkansas River Recreation Area was already up 18 percent in 2020. The river economy typically flows more than $70 million a year into local communities.

But Hamel, like so many in the water community, is acutely aware of potential shoe dropping in the Upper Colorado River Basin, which ultimately plays out on the Arkansas River.

None of the water in America’s West, or anywhere, for that matter, operates in a vacuum. When the U.S. Bureau of Reclamation made its historic shortage declaration on the Colorado River on Aug. 16, the famed waters through Browns Canyon National Monument, as well as the local economy and environment that ripple out from them, were arguably in a stranger position than the day before.

In the words of Federal Water Master John Thorson, “Water links us to our neighbor in a way more profound and complex than any other.” 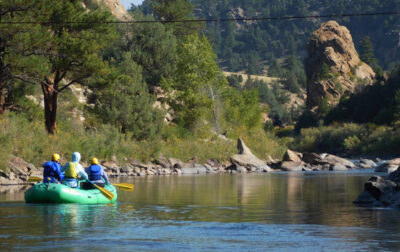 Rafters take an off-season paddle out of Hecla Junction on the Arkansas River. Photo by Tara Flanagan

Upon the Aug. 16 announcement, Arizona farmers braced for 512,000 fewer acre-feet in the 2022 water year. The news was no surprise, really; they’d anticipated it for months.

For now, Nevada will lose 21,000 acre-feet. California, with the most senior water rights among the three states that comprise the Lower Colorado River Basin along with Mexico, has been spared for the time being.

The situation has players in the water industry girding for more news nobody wants to hear. Lake Mead, the major reservoir for the lower basin states, had hit a historic low of 1,067 feet, threatening the levels for hydropower for 1.3 million people. Without significant changes to two decades of drought driven by changing climate, more restrictions are likely on tap.

And with that, talk is intensifying in the upper basin, where the Bureau could declare a shortage as soon as 2022. Colorado, Wyoming, Utah and New Mexico comprise the upper basin states that rely on Colorado River water.

“That thing is looming,” Hamel said of potential cutbacks in use, adding that nobody really knows what that would look like locally.

Just as Lake Mead’s ability to supply water and electricity in the lower basin has been threatened, the levels at Lake Powell and the threshold required for hydropower could trigger cutbacks for the upper states. Glen Canyon Dam generates 5 billion kilowatt hours of electricity annually.

For the record, things at Lake Powell aren’t great. While Lake Mead is sitting at about 35 percent capacity – a level not seen since it started to fill with the completion of Hoover Dam in 1936 – Lake Powell, which began forming in 1963 with the construction of Glen Canyon Dam, is a scant 30 percent of full pool.

The reservoir, which straddles Utah into Arizona, is down 50 feet from a year ago, evidenced by a stark white ring against the red desert rock, representing former water levels. Canyons that were once underwater are emerging, and houseboat rental companies cancelled reservations through August. Responding to the historic low water levels, the National Park Service issued a ban on launching the boats in mid-July.

The Hardest-working River in the West

The Colorado could easily be called the hardest-working river in the West, originating as a modest creek in Grand County and eventually draining a massive watershed that serves 40 million people before it ends, 1,450 miles later, at its battered delta in the Gulf of California.

The Upper Arkansas River Basin eventually echoes what’s happening on the Colorado. The Fry-Ark, the trans-basin diversion project originating on the Frying Pan River in Pitkin County, bears notable responsibility for the fun and stream ecology hereabouts, and in turn, the local economy between July 1 and Aug. 15. During that timeframe up to 10,000 acre-feet in supplemental flows are set free from the Twin Lakes and Turquoise Lake reservoirs.

Fry-Ark, short for Frying Pan-Arkansas, was authorized in 1962 and completed in 1981. President John F. Kennedy called what would be a $585 million endeavor a game changer, a model for the future owned by all Americans.

Not that the proposal rolled in unscathed for a few approval strokes of Kennedy’s pen. A change-up from the considerably larger and scuttled Gunnison-Arkansas proposal, Fry-Ark would not happen easily. Enduring nearly endless political stalling from its genesis – mostly from Western Slope residents who weren’t keen on seeing their water sent to the eastern side of the Continental Divide – it also caught the wrath of California and Arizona politicos, who argued that any water diverted from the Colorado River Basin was ultimately bad news for them.

During that time, Americans also became increasingly concerned about the environmental issues surrounding the big resource development projects springing up, and Fry-Ark met opposition from groups such as the Sierra Club, Isaac Walton League and the Wilderness Society. But severe drought in the West in the 1950s was close enough to the 1930s Dust Bowl era to gather steam in Congress for water development.

In the end, after considerable pitchfork throwing, the Ruedi Dam and Reservoir were offered up to the Western Slope as a storage solution and compromise of sorts. Construction began in 1964. The project was the first step of the massive, gutsy Fry-Ark. Its network of storage, tunnels and canals would in time send a reliable supply of water to east slope farmers, industries and cities, plump the summer waves moving through Chaffee County and help support a Gold Medal fishery in the off seasons.

“I don’t think there is any more valuable lesson for a president or member of the House and Senate than to fly as we have flown today over some of the bleakest land in the United States and then come to a river and see what grows next to it… and to know how vitally important water is,” Kennedy said in 1962, when he traveled to Pueblo to sign the Fry-Ark authorization.

Kennedy said it was time to examine additional water projects “so by the end of this century, when there are 300 million people in the United States, that there will be available to them land and water and light and power and the resources and places to live and places to rest and places to work.”

But Kennedy did not foresee, at least publicly, the climate challenges that would rise to the fore in the early part of that next century and threaten the river systems and their dependent land, water, resources, and places to live.

Part II: Dancing with the water supply: Fry-Ark, the Colorado River and cooperation

Editor’s note: In late July, Gates Family Foundation and the Colorado News Collaborative announced that Ark Valley Voice (AVV) Journalist Tara Flanagan was awarded a water fellowship, to participate in a statewide newsroom effort to strengthen water reporting at newsrooms across Colorado. This is the first in a series of stories about the importance of water in the west, specifically focused on the Arkansas River basin.