As Colorado Parks and Wildlife celebrates its 125th anniversary in 2022, it may be long remembered as the year of the brook trout

Fall is a good time to go fishing — and this year, this big one didn’t get away.

Only five months after Colorado Parks and Wildlife (CPW) certified a new state record brook trout for the first time in 75 years, the record was again re-established by Matt Smiley of Lake City, Colorado. It comes as CPW celebrates its 125th anniversary. 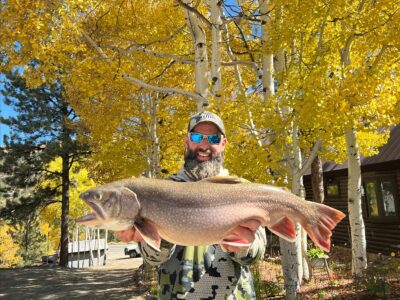 Matt Smiley of Lake City poses for a photo with the new state record brook trout he caught Oct. 8. The fish lost some of its color after a long hike down from the mountain lake where it was caught. Courtesy of Matt Smiley

On October 8 Smiley caught an 8-pound, 9-ounce brook trout from Waterdog Lake, located on the east side of Lake City in Hinsdale County within the Uncompahgre National Forest.

The fish measured 26.25 inches in length and had a girth of 16 inches.

“The experience of this catch has been surreal, and it took a few days to soak in. It’s a really special fish,” said Smiley. “The toughest thing for me with this whole deal was deciding to keep the fish. I’ve released so many over the years, but it was one of those deals where I made a quick decision and wanted to give this fish the recognition it deserves.”

For the full story of his catch, follow this Colorado Parks and Wildlife link: https://cpw.state.co.us/aboutus/Pages/News-Release-Details.aspx?NewsID=3692

“When it surfaced and I could see it, all I could think was, ‘Wow.’ I’ve caught big brookies in the past around the state, but when I saw this one, it was just different. It had way more length than any of the big ones before.”

After a lengthy battle with the trout, Smiley had another 3.9-mile hike down the steep trail with the fish in his backpack. He took it directly to the Lake City post office where it was weighed by Emily Dozier, who happily obliged Smiley’s request to have the fish weighed. After further inspection from the local CPW aquatic biologist, it was declared the new state record brook trout.

Smiley said the decisions to keep the fish, certify it as a record brook trout and have it mounted were all difficult.

“I’ve let some really big ones go, and then you see them later and age has not been kind to them as they’ve regressed and gone the other way when they aren’t getting the nutrients they need to maintain that size,” he said. “This one, it was in peak condition, and I made the decision to give that fish the recognition it deserves. But it’s been the toughest thing for me with this whole deal. We learn none of them live forever, but it’s just a crazy deal when it all happens at once and you have to make that quick call.”