While some portions of Colorado have started returning to more normal weather conditions, much of the state and surrounding regions are still plagued by long-term drought conditions as fall begins, meaning waterfowl hunters may see some difficulty in finding good hunting opportunities during the 2022-23 seasons.

Surveys of waterfowl birds show that the populations of all but one of the five most common species of waterfowl are below average this year. 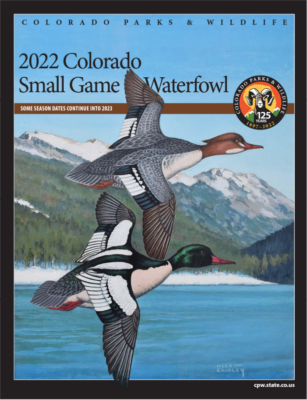 In Colorado, waterfowl hunting seasons start with September teal and Canada goose seasons and extend through light goose conservation season in April. Though waterfowl production during 2022 was likely variable, ranging from poor to average based on local conditions, most ducks and geese in Colorado for the fall and winter hunting seasons migrate from other states to the north and Canada.

U.S. Fish and Wildlife Service surveys for 2022 found a total pond estimate (breeding habitat calculation) of 5.5 million in Prairie Canada and the northcentral United States, nine percent above the 2019 estimate and similar to the long-term average. Areas that produce many of the ducks that come to and pass through Colorado saw dry conditions and were judged by survey biologists to have mostly fair or poor habitat conditions.

The total duck breeding population estimate in the surveyed area was 34.2 million birds for 2022, 12 percent lower than the 2019 estimate and four percent below the long-term (1995-2019) average.

The estimated abundance of green-winged teal was 2.2 million, 32 percent below the 2019 estimate of 3.2 million and similar to the long-term average.

The estimated abundance of gadwall was 2.7 million, 18 percent below the 2019 estimate but 30 percent above the long-term average.

Continuing drought and drier wetlands and reservoirs may lead to quicker migration through Colorado for early ducks like teal, gadwall, shovelers, and widgeon. Later migrants, like mallards and Canada geese, see their best hunting when a winter cold front pushes birds south from Canada, the Dakotas, Montana, and Wyoming.

Colorado’s waterfowl season dates and bag limits for 2022-23 will be similar to 2021-22. In the Pacific Flyway portion of the state, the daily bag limit for Canada geese has been increased from four to five. In the central Flyway portion of the state, there is no longer a separate bag limit for mergansers; they are now included in the overall duck daily bag limit. Colorado Parks and Wildlife (CPW) suggests hunters scout areas ahead of time to have a successful season, as local conditions and migration timing are always changing.

Additionally, waterfowl and other wild birds saw widespread infections and new strains of avian influenza (HPAI), and CPW expects infected waterfowl will be present during the 2022-23 season. Hunters should follow basic precautions:

More details about Colorado’s waterfowl seasons and hunting regulations can be found in the 2022 Colorado Waterfowl brochure, available at license agents, CPW offices, and online. Duck and goose hunting in Colorado requires a small-game license and both federal and state waterfowl stamps, available for purchase at cpwshop.com. Hunters are also required to obtain a Harvest Information Program (HIP) number.

Colorado Outdoors Online, in cooperation with Ducks Unlimited, offers a Waterfowl Resource Guide. For more information on where to hunt on public land, see CPW’s guide in their magazine, Colorado Outdoors.