As the Emergency Response Attempts to Slow the Spread of COVID-19, Rumors Don’t Help and Aren’t True

On Saturday, March 21, a Facebook post was saying the “National Guard [was] onsite” in Gunnison County and that the county was “CLOSED” to anyone traveling that direction and they should “turn around.” It was an untrue rumor, one of many that is not helping as the nation and our state deal with the the spread of the coronavirus known as COVID-19.

This post is one of several similar rumors that have been circulating on social media and among local citizens this past week. In fact, on March 17, 2020, just a few days ago, Out There Colorado news media site reported that the “Colorado Department of Transportation (CDOT) posted on Facebook that the rumors of an I-70 closure are not true.” The article further attempted to debunk local rumors saying “all highways in Gunnison County will remain open.” 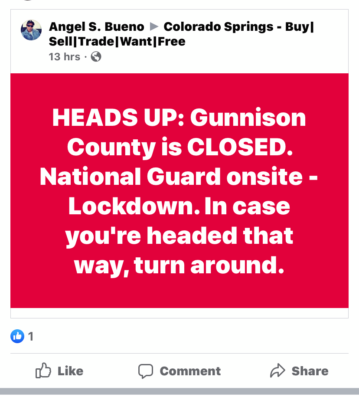 Ark Valley Voice contacted both Chaffee and Gunnison County dispatch centers in order to verify whether this most current rumor posted as “fact” on Facebook was true or not. Neither center was aware of any current or planned road closures related to the COVID-19 pandemic by the National Guard, or any state or local law enforcement agencies.

Furthermore, Ark Valley Voice reached out to the Chaffee County Emergency Manager Richard Atkins to see if he was aware of any planned closures by the state and who can authorize such a closure.

Manager Atkins reiterated he was not aware of any current or planned closures related to the COVID-19 pandemic. More importantly, he said it would require a special act by the governor to close the state roadways in the way suggested by this Facebook post. Not only that, any road closure of that nature would be accompanied by many public announcements along with clear guidance from the local government.

It is true that Gunnison County, along with several other mountain counties, is one of the harder hit counties in the state, with a large numbers of cases. The county had 22 reported COVID-19 cases as of 4 p.m. March 22. 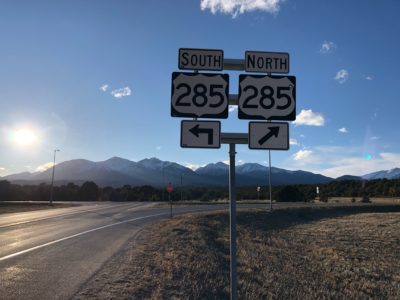 Because of that fact, Gunnison County has enacted stricter measures for its citizens and those traveling through the county. Like Chaffee County, they are essentially “closed” for business; discouraging anyone from stopping and conducting business other than essential services, because of the large number of cases.

In fact, such incendiary posts risk making an already difficult situation even worse. For example, the National Guard has been traveling throughout our area the past couple of days in order to assist counties in a healthcare role. They were used in Chaffee County this weekend, as well as other counties, to help administer COVID-19 tests.

When people share and spread these false posts/rumors they can incite other unknowing and highly stressed citizens into direct conflict with others, including these healthcare professionals and other first responders.

During this time of heightened anxiety and added stress, it is essential that people resist the urge to share or sensationalize unverified facts/news. In addition, be proactive and report any of these posts or request that the sender stop sharing. Do not make a difficult situation worse.

If you hear or see a rumor such as this, contact local government authorities to ask them to verify or refute the information. Or contact Ark Valley Voice at info@arkvalleyvoice.com and we will attempt to track down the rumor and find out if it is true or false.