The Chaffee County Sheriff’s Office reported that yesterday afternoon around 3:15 p.m. the Chaffee County Communications Center received a call of shots fired and a man threatening to kill another individual in the Midland Trail Area on CR 304. 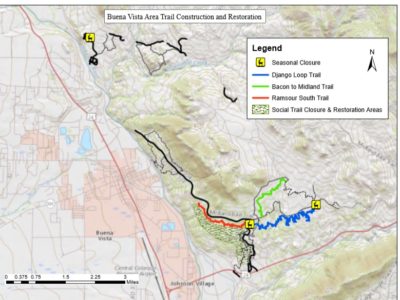 the MIdland trail is a popular hiking area just north est of Buena Vista. This map shows Phase 1 (Ramsour) of the trail construction in Midland as completed.

Deputies from the Chaffee County Sheriff’s Office and the Buena Vista Police Department responded and found a man suffering from visible head and face trauma.

Investigation disclosed that the victim was target practicing in the area and was attacked by an unknown man who used a stick and a rock to cause the injuries. During the attack, the suspect made the victim remove all his clothing. Just prior to deputies arriving, the suspect fled the scene.

The victim was transported to HRRMC by ambulance and was being treated for his injuries,

The suspect, Labosky, was transported to the Chaffee County Detention Facility and was charged with the following: