Those of us who regularly drive U.S. 285 between Chaffee County to metro Denver and back again know an icon when we see one. The  authentic Coney Island Boardwalk on the western edge of Bailey is an institution, dishing out dogs and relish toppings with a distinctly Brighton Beach attitude.  And if you miss the giant-size hotdog structure  — well — you’ve got your eyes closed. 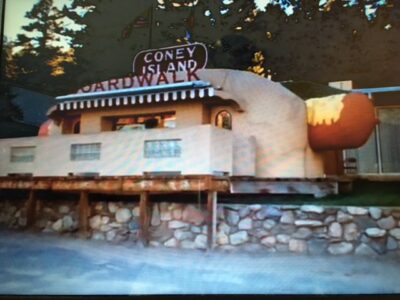 The owner, Ron Aigner, purchased the building and the authentic boardwalk in 2006 and moved it to the edge of Bailey on land that borders a river, not an ocean.  There it has rested. Before that, it had an honored if kitschy spot on Colfax Ave. in Denver, then briefly found a home in Conifer, before arriving in Bailey.

But now, Aigner is putting the landmark up for sale (it’s complete with a house attached, and a separate office structure with two apartments) and says he hopes that a buyer in the local area can keep the business going. A mere $1.5 million will buy you the place, lock, stock, and boardwalk.

For those who may not know, Coney Island is a Brooklyn institution. The neighborhood, Coney Island Beach, and an amusement park sit on a peninsula in the southwestern section of the New York City borough of Brooklyn. It is bounded by Brighton Beach and Manhattan Beach and its history stretches all the way back to the 1600s, and before that the Native Americans.

Throughout its sometimes checkered past, Coney Island has maintained a sense of authenticity; from grubby to magical, windswept and barren to sparkling and full of wonder. It is the site where, it’s said, rollercoasters were invented. By the early 20th century, it was the largest amusement area in the United States, attracting several millions of visitors per year. 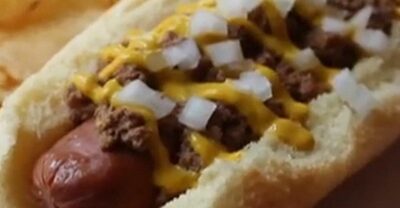 Wrong, at least if you’re from the East Coast, or homesick for the way they do them in Brooklyn. Advocates say that the Coney Island Hotdog “is just not your typical chili dog.”

The Coney Island Hotdog is a pink hot dog with a “peppery-sweet” coney meat sauce, on a soft bun. There might be debate about other possible toppings, but distinguishing the coney dog from other hot dogs are two toppings served on top of the meat sauce: mustard and chopped onions.

For a preview of a trip on U.S. 285 to visit the Coney Island Boardwalk, follow the link to this video: