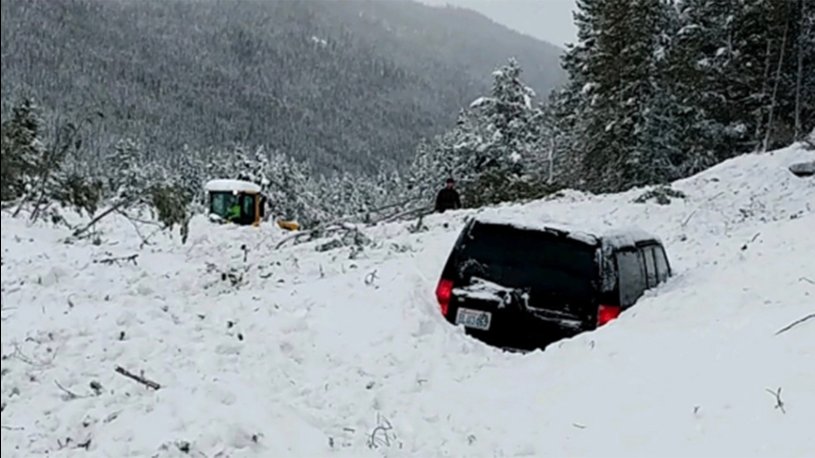 Avalanches closed I-70 between Frisco and Vail Thursday morning, and some portions of the road have been closed for more than 12 hours already. The avalanches buried both lanes of the I-70 interstate highway in snow, 15 feet deep in some areas.

At the time of this report, I-70 remains closed westbound between Copper Mountain and Vail. Traffic is backed up to near Frisco, with drivers waiting hours in line. Truckers in the same lines might find themselves sleeping in their trucks, but will probably be more comfortable than drivers of cars and SUVs who may not be able to get off the interstate to shelter.

According to the NWS warning “a designation of extreme” translates to very large, natural avalanches of historic size. These destructive avalanches may run from the top of ridges to the valley bottoms. The size and location of avalanches are tracked year by year, much as earthquakes and hurricanes are, and the size of the slides being experienced in the high country this year hasn’t been seen in decades. One of the slides that just occurred along U.S. 40 is in an area that hadn’t seen such a large slide in that location since 1957.

The danger is not just on interstates and ski slopes. County officials are reporting very dangerous avalanche conditions exist in Aspen, Vail, Summit and Lake Counties, and are asking people not to travel at all Thursday evening.

“Nothing is worth a life,” said Lake County Sheriff Amy Reyes, in a statement asking people to stay home Thursday evening and not travel county roads. U.S. 91 was closed early Thursday morning between Leadville and Copper Mountain when an avalanche triggered a gas leak near Copper Mountain. It reopened but has closed again due to another big avalanche that covered U.S. 91 about one mile south of the Copper Mountain ski area. The slide buried three vehicles, but the state patrol says no one was hurt. It was at least the third major slide of the day in the area.

Any driver traveling in the high country should have equipment and supplies, and be prepared to spend time in the car, says Tamara Rollinson, CDOT spokesperson, in talking about mitigation efforts. “I think we have saved lives, the whole idea (of closing roads to bring down enough snow to avoid major avalanches) is to take control of these slides. To bring down the snow when there are no cars there.”

According to the National Weather Service, the avalanche danger is caused, not just by the amount of snowfall this year, but how it has fallen. This year the upper atmosphere has been what is called an “atmospheric river.” Rather than getting fast-moving storms that blow through and move east, the Rocky Mountains are seeing one after another of slow-moving, two to three-day snow storms. Winds build up the top cornices on peaks, loading the tops of the slopes.

As the layers have built up, they have different moisture structures, creating icy layers that can slide. The warmer temperatures of the past few days, with rain suddenly falling on existing snow and then turning to snow again, has apparently worsened the situation.

Photo: Courtesy of the National Weather Channel. Cars buried in the latest avalanche on U.S. 91 south of Copper Mountain.

For more information on avalanche warnings and CDOT mitigation, readers can go to: