Temperatures fell below zero overnight News Year’s Day in Chaffee County, standing at a mere 8 degrees by 10 a.m. Wednesday, Jan. 2 in Buena Vista and 13 degrees in Salida. As the town’s dig out, and ranchers check on their cattle, there were those who took time to enjoy the snow after a relatively dry past three months. 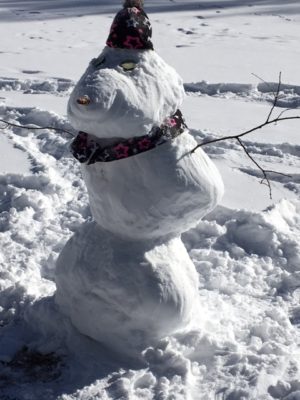 This snowman in Salida’s Alpine Park, made by unknown hands (although one, tell-tale hand print remains) seems to be enjoying both the chilly temperatures and the sunshine. (photo by Jan Wondra)

As evidenced around Salida, the snow was perfectly pack-able for building snow men, forts, or just about anything else you could dream up.

As the New Year’s Eve snow storm moved out, our high today will be 20 degrees warmer than it was all day on Jan. 1, according to The Weather Channel. By mid-afternoon, Salida is expected to hit 38 degrees, while Buena Vista should reach 35 degrees, before Wednesday overnight lows down to 11 degrees.

As a comparison, Salida’s average low temperature is 28 degrees and the average annual precipitation is only 9.49 inches. Moisture, when it comes, tends to be welcome.

Monarch Mountain ski area could be said to be rejoicing today, with a 38 inch base of mostly new snow. It’s snow report indicates that 63 of its 64 trails, and six of its seven lifts open. But bundle up today; windchill is reported to be -2 degrees on the slopes on Wednesday.

Community invitation: If you spot a snow man, snow woman, snow monster or any other creature you deem worthy of coverage, do email it to Sandy@arkvalleyvoice.com so we can highlight the fun in the snow — but hurry — before they melt away!