Thanks to a collaborative effort led by the U.S. Forest Service and the Arkansas River Watershed Collaborative (ARWC), the threat of wildfire is lessening around Monarch Pass. With 90 percent of mature trees in the area killed by spruce beetles, the Monarch Pass Forest and Watershed Health Project has continued to remove the dead trees to reduce the fuel load and the risk of catastrophic wildfire.

The eight-wheeled CTL machines can operate on slopes as steep as 70 percent with the optional use of tracks and a tether. The eight wheels and tracks help reduce the impact to soils by spreading out the weight of the machinery. “We’re trying to have the lightest touch possible,” said ARWC Lead Forester Andy Lerch, who manages the Monarch Pass project.


The larger, higher-quality logs are being sold to sawmills, and the lower-quality logs are being sold for firewood. Utilizing the timber from this project helps to sustain the local forest industry. Having local markets for this timber is essential to the success of this project and is key to getting the dead trees off the mountain. The value from the timber helps to offset the cost of CTL forest management.

Lerch said protecting critical water resources is a major concern driving the Monarch Pass project. “We’re concerned about high-severity fire in our headwaters regions, which would affect water quality for everyone downstream.”

Cities and towns that rely on clean water from the Monarch Pass drainage include Salida, Poncha Springs, Colorado Springs, and Pueblo, all of whom have contributed funding to support the project.

The thinning work is contracted to Oregon-based Miller Timber Services, which pioneered CTL timber harvesting in the Pacific Northwest. Chief Forester with Miller Timber Services, Matthew Mattioda, explained “This is an important project for the community and the downstream water users, and we are excited to be a part of the solution.”

“The impacts are contained to the pathways used by the CTL machines,” said Lerch.  The vegetation in the 60-foot swaths in between those paths remains largely undisturbed, he said, in part because, when the harvester cuts a tree, it prevents the tree from falling onto and damaging other trees, including the younger trees not affected by the beetle outbreak. 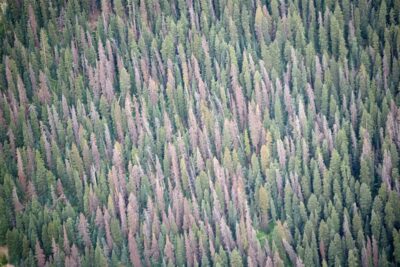 Those younger trees will remain on the mountainside “to help promote the next generation of the forest. Over time, the project area will change to a more natural look,” Lerch added.  He also noted that he’s seen minimal erosion on the slopes treated last year despite a strong monsoon season, this, he says, is a testament to the “light touch” of the CTL equipment.

Given the steep slopes in the Monarch Pass Forest treatment area, monitoring for erosion is an important component of the project. Chuck Rhoades, a watershed researcher with the Forest Service Rocky Mountain Research Station, is leading that effort.

Rhoades explained his team has installed sediment fences on a number of corridors used by the CTL equipment. “Anytime there’s significant rain, we sample,” he said.

On July 21 a storm dumped “a half-inch of rain in 15 minutes that caused surface and rill erosion. We collected sediment in a few fences, but the initial findings did not show anything alarming.  The harvesting operations place logging slash on the surface of most of the CTL trails, and that cover appears to reduce the amount of soil erosion,” he said.

As a pilot project, the work at Monarch Pass is the first use of tethered CTL equipment in a national forest in Colorado. The Rocky Mountain Research Station has established experimental plots in the treatment area to study the project, and the findings will improve foresters’ understanding of the benefits and impacts of this type of project.

More than a year into the work, the project is on track to achieve its purposes:

Prior to the Monarch Pass project, Forest Service personnel had said they would not send firefighters into the area to fight a fire because of the danger from the amount of dry fuel in the dead trees. But Lerch explained that professional firefighters who have seen the work done this past year told him that they would now be willing to fight fires in the treated area. “We’re giving firefighters tactical options,” Lerch said.

The benefits of the project for local communities include:

ARWC secured more than $600,000 in matching funds for the project from multiple partners, including $400,000 from the Colorado Water Conservation Board. Other monies came from the Upper Arkansas Water Conservancy District, the Pueblo Board of Water Works, Colorado Springs Utilities, Chaffee County, the City of Salida, the Town of Poncha Springs, and Trout Unlimited.

The Forest Service Salida Ranger District leveraged those funds to contribute more than $1.2 million in Forest Service funding for the project. Along with wildfire mitigation work at Monarch Mountain Resort, all possible fuels treatments will be completed on more than 1,600 acres of the headwaters of the South Arkansas River on Monarch Pass.

For 2021, Chaffee County contributed $50,000 through its Common Ground Program, a conservation funding program addressing landscape challenges for the community.

Chaffee Common Ground, approved by the voters in 2018, invests a portion of the county’s sales tax revenues to strengthen forest health and reduce wildfire danger; conserve and support working agriculture and rural landscapes; and manage the impacts of growth in outdoor recreation. Created when voters approved a 0.25-percent-sales-tax increase specifically for that purpose, Common Ground supports locally-based, collaborative programs and projects through a transparent grant process that leverages revenues to achieve the highest impact. According to the county, to date, grants awarded include matching funds that will bring nearly $9 million in value to the community.