Congress did not approve a budget before the end of the country’s fiscal year, which ended Sept. 30, and the House’s bill extending funding goes only until Dec. 20. As the United States Congress moves ever closer to the time by which it must finalize the 2021 budget or shut down the government (as happened last year), only ten of the 12 appropriation bills have been passed. Colorado U.S. Senator Michael Bennet (D) has introduced and supported multiple agriculture and public lands priorities as amendments to the package of four appropriations bills (or “minibus”) introduced in the Senate in the past few weeks.

“There is a lot of important work that we should be doing in the Senate. This includes protecting and maintaining our public lands, and expanding overseas markets for our farmers and ranchers,”said Bennet. “I’ll continue to look for every opportunity to move these Colorado priorities forward.” 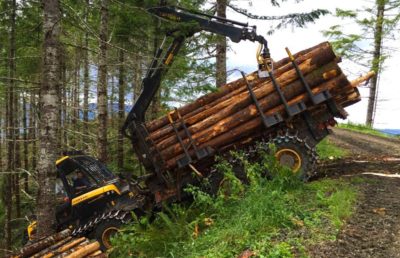 This steep-slope, cut-to-length equipment uses tracks and a winch to perform logging operations on slopes as steep as 70 percent. The U.S. Forest service proposes to use this equipment for the first time in Colorado to harvest beetle-kill timber that would otherwise contribute to heightened risk of forest fire in the Monarch Pass area (courtesy photo).

The amendments to the budget Bennet has supported include:

Other Bennet-backed amendments include the Collaborative Forest Landscape Restoration Program (CFLRP), which would fully fund CFLRP at $80 million. As Ranking Member of the Senate Committee on Agriculture, Nutrition and Forestry, Bennet led the effort to authorize funding to $80 million, but the current minibus only provides $40 million.

Bennet, together with U.S. Senator Cory Gardner (R-Colorado) also introduced the Ski Area Fee Retention Act to ensure that the fees generated by ski areas would be retained in the National Forests in which they are generated. This would provide the Forest Service more resources in heavily trafficked forests. The amendment bill mirrors the original bill introduced in June 2019.