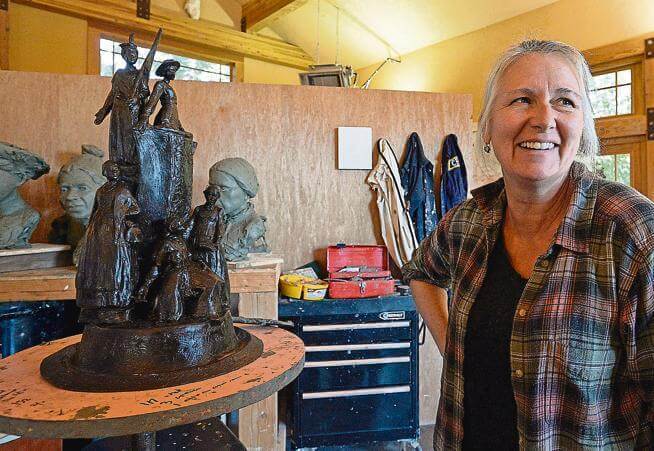 Is it time to try again?

Consider this: the last time a sculpture of the heroines of the women’s suffrage movement was placed in the United States Capital it ended up in a broom closet.

According to Smithsonian Magazine, the sculpture of Carrara marble held the likenesses of Elizabeth Cady Stanton, Susan B. Anthony and Lucretia Mott. The inscription on it read: “Woman first denied a soul, then called mindless, now arisen, declaring herself an entity to be reckoned.”

The day after the 1921 unveiling ceremony in the Capitol Rotunda on the 101st anniversary of the birth of Susan B. Anthony, the sculpture was moved underground to the crypt (which was used as a broom closet) and Congress ordered the inscription be removed. There it sat. It wasn’t until May 1997 that the sculpture was moved to its current location in the Rotunda, and then only after a fundraising effort to pay for its movement back to the light.

So now two Colorado U.S. Senators Michael Bennet (D) and Cory Gardner (R) believe its time to recognize the suffragists’ sacrifices. On June 4 they introduced legislation to authorize Colorado artist Jane DeDecker to install her Every Word We Utter sculpture in Washington, D.C. The sculpture would be the first outdoor monument to commemorate the women’s suffrage movement and would feature Susan B. Anthony, Elizabeth Cady Stanton, Sojourner Truth, Alice Paul and Ida B. Wells.

They hope to have the bill passed and signed in time for the sculpture to be installed before the 100th anniversary of the passage of the 19th Amendment. The bill was passed by Congress June 4, 1919, and ratified on August 18, 1920. It guarantees all American women the right to vote.

“I see the suffragists as founders in exactly the same way as any of the people who wrote the Constitution – they challenged Americans to make our country what it ought to be. Monuments across our nation’s capital commemorate the founders of our country – and it’s time we pay tribute to the suffragists accordingly,” said Bennet. “100 years after Congress passed the 19thamendment, I can’t think of a more fitting way to commemorate the powerful work of the brave pioneers who made women’s suffrage a reality than with the first outdoor monument in their honor.”

“On the 100th anniversary of the Senate passing the 19th Amendment, I am honored to join Senator Bennet in commemorating the women’s suffrage movement with its first outdoor monument,” said Gardner.”This sculpture will pay homage to the generations of women whose determination granted women the right to vote.”

Companion legislation sponsored by Rep. Joe Neguse (D-CO) was introduced in the U.S. House of Representatives in January 2019. Testimony on the bill was heard in the House Committee on Natural Resources in May. 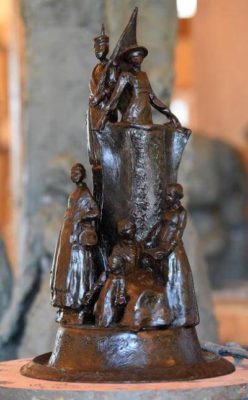 A desk-size model of the ‘Every Word We Utter’ sculpture honoring the women’s suffragette movement. It will be 22 feet high when installed.

Perhaps this sculpture has a better chance of staying put where it is installed than its 1921 cousin.

“‘Every word we utter, every act we perform, waft unto innumerable circles beyond.’ The work of which Stanton spoke is not yet done,” said sculptor Jane DeDecker, “I believe that Every Word We Utter will inspire young women to take action, make their voices heard and continue the movement. This bill … pays tribute to generations of women who fought to make it happen.”

The countries of the British Commonwealth have done somewhat better – at least in terms of years. It was 1970 when a suffragette monument sculpture was erected in London, but for some reason, there is no image of a woman on that piece. There are two other sculptures of women suffragettes there: one in London and one in Leicester and the country of Australia has four sculptures honoring the suffragette movement.