In a letter to President Donald Trump delivered on Monday, Senators Michael Bennet (D-Colo) and Kamala Harris (D-Cal.), together with 25 of their colleagues have called for the immediate removal of Stephen Miller from his position as a White House senior advisor. 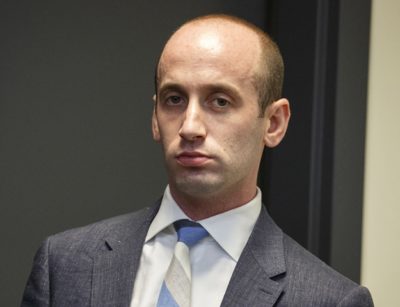 The letter follows recent reports detailing move than 900 emails sent from Miller to far-right Breitbart News, just between 2015 and 2016, in which Miller advanced the views of white supremacist, anti-immigrant ideologies. The letters related directly, say the Senators, to specific immigration policies Miller implemented in his White House position.

“Mr. Miller’s demonstrable white nationalist ideology has directly translated into your administration’s policies, which have been widely criticized for systematically targeting communities of color,” wrote Bennet and his colleagues.

“The Muslim ban targeted individuals of color and caused chaos at U.S. airports around the country, wreaking havoc on the lives of countless individuals and families,” continued Bennet. “The family separation policy tore children from their families, resulting in widely reported mistreatment and human rights abuses of immigrants in detention facilities nationwide.”

“These e-mails clearly show what is driving Mr. Miller. It’s not national security, it’s white supremacy—something that has no place in our country, federal government, and especially not the White House,” read the letter. “Mr. Miller’s views go against everything we stand for as a country. They are unacceptable and unjust. Simply put, Mr. Miller is unfit to serve in any capacity at the White House, let alone as a senior policy advisor. We demand that you remove Stephen Miller immediately.”

The text of the letter is available HERE