During former President Donald Trump’s tenure, the Department of the Interior took steps to move the federal offices of the Bureau of Land Management (BLM) from the East Coast to Grand Junction, Colorado. The move had broad support among Westerners, since a significant portion of BLM-managed lands are in the Western U.S.

Bureau of Land Management Logo courtesy of the BLM

Colorado Senators Michael Bennet, and John Hickenlooper have reiterated their support for a full-fledged BLM headquarters in Grand Junction, and are urging the Biden Administration to work with the Colorado delegation to accomplish this move

After the scaled-down move was announced, the Grand Junction Daily Sentinel editorial board wrote, “We’re stuck between feeling grateful that Grand Junction will be known as the BLM’s Western Headquarters and frustrated that such a distinction has been hollowed out to its barest impact.”

In a letter to President Joe Biden, the senators touted the benefits of a full-fledged headquarters on the Western Slope and urged the Biden Administration to work with the bipartisan members of the Colorado Congressional Delegation on the BLM headquarters move. 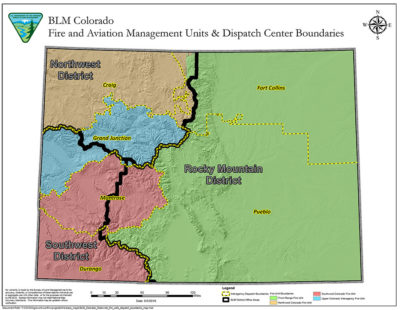 Image courtesy of The Bureau of Land Management’s website

“We continue to support a full BLM headquarters in Grand Junction. We believe that such an effort must be more than symbolic and must include the staff and resources to improve management and protect our public land,” wrote the senators. “A full headquarters in Colorado would not only grow the Western Colorado economy, but also send an important signal that rural America is an appropriate place for such a prestigious institution.”

Bennet has supported moving the BLM national headquarters out west for years, commenting on the idea in August 2017.

While he was Colorado Governor, Hickenlooper advocated for the BLM to move its headquarters to Grand Junction and touted the economic benefits for the state.

The text of the letter is available HERE.