There are apparently politicians on both sides of the aisle in Washington who now believe that the impact of climate change is real. Colorado Sen. Michael Bennet announced Wednesday that he’s joining with two other senators in a bipartisan effort to address climate solutions. He and Senators Chris Coons (D-Del.) and Mike Braun (R-Ind.) have formed the Senate Climate Solutions Caucus, with the goal to bring together an equal number of Republicans and Democrats to craft and advance bipartisan solutions to address climate change. 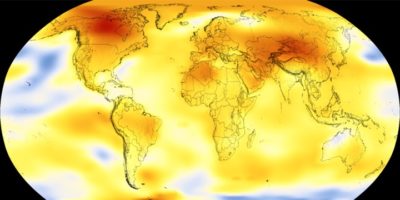 A NASA map showing the warming of the planet in 2018, with orange areas showing rising temperatures from a century earlier and dark orange regions of extreme temperature increases.

The caucus founders have been joined by five other senators representing a cross-section of the country. They include; Senators Lisa Murkowski (R-Alaska), Jeanne Shaheen (D-N.H.), Mitt Romney (R-Utah), Angus King (I-Maine) and Lindsey Graham (R-S.C.).

The plan is for the Senate Climate Solutions Caucus to meet regularly to convene experts from across the political spectrum to find common ground on solutions to address climate change.

“To effectively address the climate crisis we need enduring solutions – ones that won’t whipsaw back and forth with changing political winds, we need to build the same broad consensus in Washington to address the climate crisis that exists across the country,” said Bennet. “This bipartisan caucus is a step closer to achieving that goal, and I’m honored to join Senators Coons and Braun and my colleagues in this effort.”

“If we are to make meaningful, sustainable progress toward combating climate change, both Republicans and Democrats have to be at the table,” said Coons. “We look forward to continuing to hear from business leaders, workers, farmers, and a range of experts about their priorities and ideas for how we can best address climate change and strengthen American competitiveness.”

Braun, who calls himself a ‘lifelong conservative,” says he’s proud to launch the bipartisan Climate Solutions Caucus. “For too long, Washington has been paralyzed by partisan gamesmanship, unable to have productive conversations about our changing climate. Through this caucus, we can have real conversations about protecting our environment, securing America’s energy future and protecting American manufacturing jobs.”