Scammers try just about anything to get money from unsuspecting customers, especially around the holidays. The latest is a scam involving your utility bills.

Some customers of Xcel Energy in central Colorado, including those in the Salida area, are reporting receiving demand calls telling them that they are behind on their energy payments for which they must make a payment immediately or their power will be turned off.

A check with Xcel Energy at its Minneapolis headquarters reveals that these calls are not being made by Xcel Energy. Many of them tell the unsuspecting Xcel customer that they are behind hundreds of dollars on their utility bills. 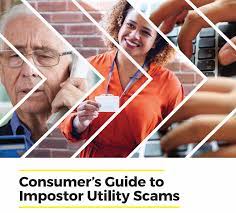 “It was last Monday night late in the evening when we got this strange call,” said Salida resident Michelle Pujol. “They called three times in a row, all from a Minnesota area code and when Brent finally answered the call, it sounded very official and they claimed to be Xcel Energy. They said we were two months behind on our utility bill and owned more than $200, and that somebody was going to be coming out in the next 15-20 minutes to collect or shut off our power. It was threatening. [My husband] said he was on his way out of the house and they said they’d call back in 20 minutes to set up billing arrangements.”

“We double-checked that our automatic payment had been paid, and it was current,” she added. “It was definitely a fraud. Then 20 minutes later they called from a different Minnesota area code and we didn’t answer the phone. Instead, we called Xcel Energy.”

“He was really demanding and threatening. If we got scared by that kind of thing, if I was elderly and alone, I would have been afraid,” said Pujol. “He was forceful — he demanded that we do something at once, or our power would be cut. The tone was designed to intimidate.”

Pujol said because they didn’t pick up that second phone call, so they don’t know how the scammer intended to get money. Some scammer calls hitting the metro Denver area are telling those they are scamming to go buy gift cards to make these fraudulent payments.

According to Xcel Energy Customer Support, it never makes demand calls such as those being received and it would never purposely turn the power off at night to any location. It also doesn’t turn the power off on Fridays leaving anyone cold for a weekend.

Xcel also cautions that telephone scams aren’t the only kinds of tricks scammers use to get at your money or your data. In fact, another common scam is employment scams, where they pose as Xcel Energy, tricking job applicants into divulging personal information on a fraudulent job application.

To be clear, Xcel says if you’re ever contacted by someone claiming to be the utility company by phone or email or in person; hang up, delete the email, or shut the door. Xcel will never threaten you with a single notification an hour or less before disconnection. Xcel Energy employees carry company credentials.

Xcel does want consumers’ help in reporting these attempted crimes. It suggests calling them back yourself at 1-800-895-4999 to confirm the person at your door or on the phone is company personnel, and report incidents. They also suggest you call the police or Sheriff’s Office if you ever feel threatened.

A version of this threat is scammers trying to get you to buy prepaid cards which are widely available at retail stores and work like cash. According to the director of Consumer Fraud Protection for the 18th Judicial District Attorney’s Office Jamie Sorrells, “They’re already putting signage in the stores actually asking, ‘are you being forced to purchase a gift card to make a payment?'”

The Consumer Fraud Protection Unit has published an entire guide to help consumers spot utility schemes and report them: https://www.utilitiesunited.org/-/media/Files/UNITED/Documents/Guide_UUAS_Guide_Utility_Scams.ashx