Biden Getting Tough to Conquer the COVID-19 Pandemic

On Thursday afternoon President Joe Biden took off the gloves and signed two executive orders, as part of a new six-pronged strategy to fight the COVID-19 pandemic, declaring it “a pandemic of the unvaccinated”.

He mandated vaccines for federal workers and contractors and announced new requirements for large employers and health care providers that he said would affect around 100 million workers, more than two-thirds of the U.S. workforce. That includes all  30,000 Head Start teachers, who will be required to get vaccinated. 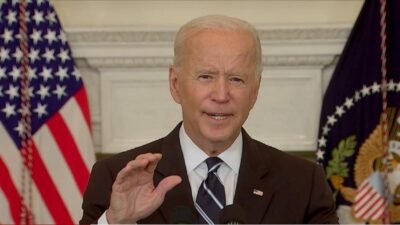 “We’ve been patient, but our patience is wearing thin,” Biden said, making a direct appeal to the 80 million people who he said are still unvaccinated. “Your refusal has cost all of us.”

As the nation passed the 40 million COVID case milestone this week, there are an estimated 153,533 new infections on average each day in the United States; 61 percent of the peak during the pandemic that was reported on Jan. 7, according to statistics compiled by Reuters.

This week, America’s hospitals house more than 100,000 patients with the Delta variant; many hospitals have reached their breaking point, and some states are beginning to ration care. It seems the president — and in fact, the majority of Americans — have flat run out of patience with the vaccine holdouts.

As of July, 27 percent of the country’s health care workers were unvaccinated, according to a study by the COVID States Project, a percentage that the president said is entirely unacceptable when the nation’s safety is at stake.

Biden announced that employees working in health care facilities that receive Medicare or Medicaid reimbursement will be required to be vaccinated. This single move will impact seven million workers at 50,000 health care providers.

Biden went on to announce that the Department of Labor will issue an emergency rule requiring all employers with 100 or more employees (estimated to apply to some two-thirds of the country’s workforce)  to ensure their workforce is fully vaccinated or require any unvaccinated workers to produce a negative COVID test at least once a week. A $14,000 fine per violation will go into effect for those refusing to follow the ruling.

The reaction from the opposing political party was immediate and negative. Reuters reported that on Thursday evening only hours after Biden’s speech, the Republican National Committee announced that it would sue the Biden administration, calling the mandate “unconstitutional” and “authoritarian.”

But legal scholars say that Biden is entirely within his rights as the leader of the executive branch of government to order and implement public safety measures, as well as direct the federal workforce to comply.

He has given federal workers the choice of undergoing regular testing instead of getting vaccinated but added that opting out of testing will no longer be an option. Less expensive in-home testing kits will now be sold en mass by Walmart, Amazon, and Kroger. Medicaid will also cover at-home tests for free for beneficiaries, and the federal government will expand a free testing program to 10,000 pharmacies.

Mindful that a swath of America wants life to get back to normal, Biden pointed out that the rates of COVID-19 in the country are four times higher now than in Sept. 2020. As a country that may be facing an even higher surge due to the volume of Labor Day weekend travel, Biden said he is encouraging large entertainment venues, like sports arenas and concert halls, to require proof of vaccination to attend events.

Biden announced a new get-tough policy on air travel. The Transportation Security Administration (TSA) will double fines on travelers who refuse to wear a mask on airlines and other modes of transportation. Given the appalling number of attacks on flight attendants this year by passengers refusing to comply with face mask rules, this would seem to be overdue.

“If you break the rules, be prepared to pay,” said Biden. “By the way, show some respect.”

The surging cases among school-age kids are a cause of alarm across the country; one in every four new cases is occurring in kids six to 11.

The president called on all schools to require vaccinations for teachers and school staff and to set up regular testing and plans to make additional funding available for local school districts that have had their funding cut by state governments for implementing COVID safety measures, such as mask requirements. He was scathing about state governors who are standing in the way of school safety.

A federal official familiar with the investigations said the Department of Education is investigating whether mandates by five state, prohibiting schools from requiring face masks, discriminates against students with disabilities who may be at heightened risk from COVID by preventing them from accessing in-person education.

“Let me be blunt: My plan also takes on elected officials and states that are undermining you and these life-saving actions,” Biden said. “If these governors won’t help us beat the pandemic, I will use my power as president to get them out of the way.