The Bureau of Land Management announced on Thursday March 4 that it is preparing to conduct a prescribed burn in the Deer Haven area which is approximately 15 miles northwest of Cañon City, south of High Park Road and west of County Road 69 in northern Fremont County.

The prescribed fire project is predicted to take place between the week of March 8 and mid-April depending on favorable weather and fuel moisture conditions.

Approximately 107 acres of BLM land will be treated to reduce the accumulated hazardous fuel and improve wildlife habitat. Targeted fuels include ponderosa pine, Gambel oak, decadent grasses and other ground fuel that has accumulated since previous treatments. 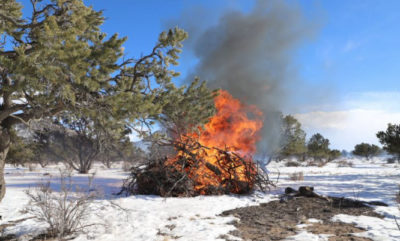 The project will create a mosaic of burned and unburned areas intended to reduce conifer encroachment in grass parks while improving forage for wildlife and domestic livestock. Prescribed fire also helps to create various stages of plant succession which is critical to the health of fire-adapted ecosystems.

Smoke from the prescribed burn will be visible throughout the day of the burn, mostly during the warmest part of the day. With cooler temperatures in the evening, smoke may linger and collect in low-lying areas. Firefighters will be on the scene throughout the burn.