The Chaffee Board of County Commissioners (BoCC) got welcome news during their Tuesday, November 15 regular meeting, when representatives of BlueTriton Brands, as well as the county’s legal department confirmed that the conservation easement on BlueTriton’s Ruby Springs parcel is ready for execution between Colorado Parks and Wildlife (CPW) and BlueTriton.

“They have done the [road] right-of-way, there are no major holdups with the language between any of the parties right now,” said Chaffee County Attorney Daniel Tom. 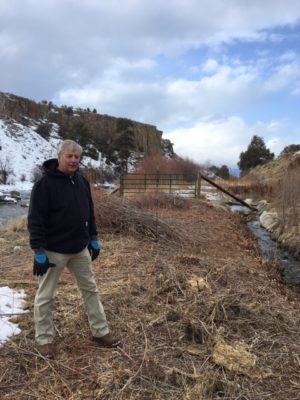 “I assume there is some sort of language that prevents some passive-aggressive movement by a future board,” asked Commissioner Greg Felt. “So you set up something that is not legally defensive to them trying to run BlueTriton out by the language?”

Asked by Commissioner Rusty Granzella if this covers mineral rights or just water rights, Tom said “The conservation easement is given to CPW to use that land for intended use, and that there is no conflict with the use: BlueTriton can continue the use they have right now.” 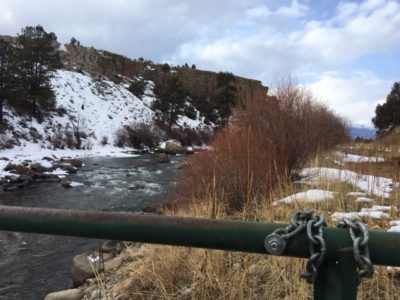 Site of the Ruby Mountain spring on the banks of the Arkansas River. The land along the river is set to become a CPW fishing conservation easement. Photo by Jan Wondra.

“The intent is the conservation easement provides for the conservation of that property for a very, very long time for this community,” said BlueTriton attorney Caitlin Quander. “It doesn’t allow for anything outside of that, beyond conservation.”

“We’ve submitted final drafts to CPW and the county.  We’re working through final comments and we’re close to [being] done with everything,” said Manager Larry Lawrence, “We’re well within our bounds of Dec. 31, 2022.

“Previous concerns about subordination have been resolved,” added Quander. “The 1041 permit and the conservation easement need to be consistent with one another.”

“We were given approval on this by the wildlife commission some time ago,” concluded Shepherd, who indicated that all that is left is for the Attorney General’s office and the CPW real estate department to be in the same place to sign it.

The approval of the current 1041 permit came with controversy, as organized protest groups voiced concerns about the wisdom of pumping water to leave this valley for bottling, and the conservation impacts on the river. While not all of these concerns have been addressed by the BoCC (nor does the philosophical and environmental question of plastics belong solely in their purview), the two-to-one BoCC vote followed a careful process. Even dissenting commissioner Baker went on record saying while he didn’t vote for the permit approval, he would work to make the conservation easement the best that could be developed.