Lake Powell, the current poster child for things gone awry in the Colorado River Basin, is shrinking from the top and sides, its old water lines scarring the southern Utah desert. 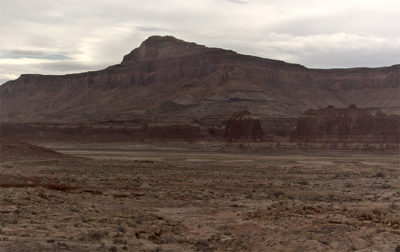 The numbers from Lake Powell Water Database don’t make it any prettier; the central storage bin for the Colorado River and a legendary playground for houseboaters, Lake Powell is down 29.67 feet from a year ago. The rivers feeding it are running at 70 percent of average and the 28 tracked reservoirs above it are at 70 percent capacity. The water level is at 39.1 percent of what they call full pool. At capacity, Lake Powell holds roughly 26 million acre feet of water.

The U.S. Bureau of Reclamation, which builds and manages dams, power plants and canals, and which hails itself as the largest wholesaler of water in the country, recently fired a warning shot. In a January forecast the agency warned that lakes Powell and Mead, the two largest reservoirs in the U.S., are heading toward record-low levels, which could result in the loss of hydropower at Glen Canyon Dam. Front-Range cities are girding for water cutbacks as the larger seven-state region stands ready to put drought contingency plans into place.

A seven-hour drive from here, Lake Powell is sufficiently out of sight to not be a constant reminder about the water situation in Colorado. Chaffee County Commissioner Greg Felt calls the reservoir “the big train station for water.” For now he says he’s not panicking about a possible major derailment and reminds us that history can be an optimist. Some dry winters have staged spectacular comebacks, he says.

But Felt also reminds us that we’re in a dry year that was preceded by another dry year. With recent precipitation propping up the snowpack, we’ve seen encouragement in February. But lest we forget, there was 2020.

The moisture-sucking year that gave us a global pandemic also wreaked havoc on America’s West. The record-setting wildfires were a reminder that our lands were brittle and dry to begin with.

In layman’s terms, the soil in Colorado is wrung out. Which means, among other things, that much of the runoff heading for our waterways stands a good chance of getting sucked into the ground.

Felt attended a meeting of the Colorado Water Congress last week, during which Russ Schumacher, a climatologist and precipitation-system specialist with Colorado State University, shared projections on Colorado’s water situation. The Congress is a nonprofit group that promotes water conservation and management policy, and the discussion confirmed that we are heading into another very dry summer if the precipitation gods don’t intervene.

Right now the state drought map remains awash in tones of red and dark brown, and 70 percent of the state is seeing extreme conditions, according to drought.gov. Chaffee County, which has a mix of severe and extreme conditions, is seeing its 13th driest in 127 years, according to the U.S. Drought Monitor. About a quarter of Colorado is categorized as an exceptional drought – the most extreme of the five categories.

The chart below details the snow-water equivalent as a percent to normal:

Colorado’s snowpack holds much of the story for the spring and summer and currently, the statewide figure is 81 percent of average, according to SNOTEL, a snow-reporting function of USDA’s Natural Resources Conservation Service. On the optimistic side, the Upper Rio Grande Basin is running at 108 percent of normal, which plays into the 243 inches recorded so far at Wolf Creek Ski Area. But the Upper Rio Grande also skews Colorado’s average upward.

Snowpack for the North Platte Basin is at 73 percent, the Colorado River Basin at 79, Gunnison at 78, and the Arkansas Basin at 94 percent.

Felt says that the summer of 2020 seemed okay if you were to look at the rafts bobbing down this abundant-looking stretch of the Arkansas. “A lot of people I talked to last year felt like we were doing pretty well,” he says. But he adds that there was augmented flow from July 1 to Aug. 15 from Turquoise and Twin Lakes. “It gave a false impression, I think.”

Felt noted that February, March, and April tend to be the best snow months hereabouts, so there is always hope for a better finish to snow season. But at this point, he says, “it needs to be extraordinary.”

That said, Felt says municipal water supplies in Chaffee County are good. The major questions remain for agricultural production, wildfire danger, and recreation. “It’s worrisome when you combine that with our forest health issues,” he says.

While the Arkansas got a good boost last summer, Felt says “it’s still up in the air” what will be available to maintain decent levels for recreation.

He acknowledges that several long blasts of snow and a significant boost to the snowpack would do wonders to calm some of the emerging warnings. At the same time, he says the snowpack we have is downright dangerous in places, with avalanches adding to the things people need to think about. As with the approaching summer, “people really need to be heads up,” he says.