Bread + Salt settles in Buena Vista, serving breakfast and lunch with a twist

The old Evergreen Cafe building needed some love and a couple of restaurateurs from Summit County were looking for the right place to expand in Buena Vista. Things have a way of working out.

Armed with the same menu from Bread + Salt in Frisco (they also own Bagalis Italian restaurant in Frisco), Michal Ulehla and Joyce De La Torre spiffed up the highly visible yellow building at Highway 24 and Brookdale Avenue in Buena Vista and opened on a part-time basis in late January. 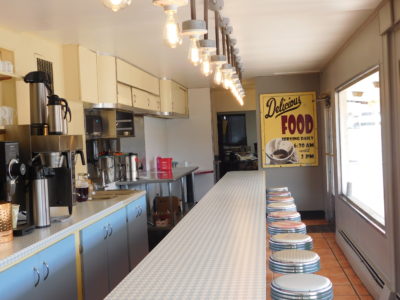 The counter at Bread + Salt remains a pleasant blast from the past. Tara Flanagan photo

Soon the parking lot started filling up, and now the restaurant is open every day from 7:00 a.m. to 2:00 p.m., offering breakfast and lunch and the same laid-back atmosphere customers came to know at the Evergreen. Yes, the retro lunch counter is still there.

Manager Rachel Dvorak said the Buena Vista location operates on the same philosophies that Ulehla and De La Torre have used for its namesake in Summit County: Buying Colorado-based ingredients as much as possible and offering inspired and fresh food that is primarily from scratch – including their bread.

They buy cheese from Jumpin’ Good Goat Dairy in Buena Vista, and are talking to customers and looking at the wide range of craft beers in Colorado for when their liquor license is approved. In Frisco, they currently serve spirits from Buena Vista’s Deerhammer Distiller.

Ulehla, who grew up on a farm in the Czech Republic, named the restaurants based on the European welcome greeting ceremony in which bread represents prosperity and never going hungry, and salt meaning there will always be spice in life. As a chef, he has worked in California, Chicago, and most recently, Summit County. In designing the Bread + Salt menu, he came upon a few items that have become mainstays.

Dvorak said the Summit Vegetable Hash is arguably the signature dish, featuring tri-color beets with potatoes, sun-dried tomatoes, goat cheese, pesto, and eggs. For breakfast diners, there are also the butternut squash and Spanish chorizo scrambles, roasted apple challah French toast, and a variety of twists on omelets and other early-day fare.

For lunch, Bread + Salt offers up three varieties of burgers, pork and chicken sandwiches, poblano green chile, chicken chilaquiles with red chipotle chile and crema Mexicana, burritos, and the well-received duck confit tacos. Dvorak says they rotated the latter item off the menu and immediately learned from the fan base that it was a big mistake. The tacos came back. 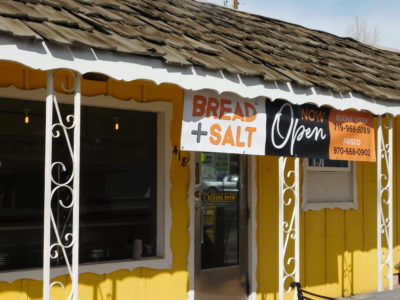 Dvorak says the restaurant has seen a steady flow of customers, including repeat locals. “We have a lot of farmers and ranchers who come in and appreciate good food that’s fresh,” she said.

She noted that Bread + Salt has engaged with Chaffee Arts to hang and sell local art. It’s currently featuring the work of Jessica Vogel. They plan to hang new art every three months – including work from high schoolers.

Dvorak has heard the rumblings that Buena Vista is girding for a very busy summer, and she says the “rock-solid” business they’ve seen in Frisco has helped them prepare for the uptick that may be especially pronounced as COVID-19 restrictions loosen.