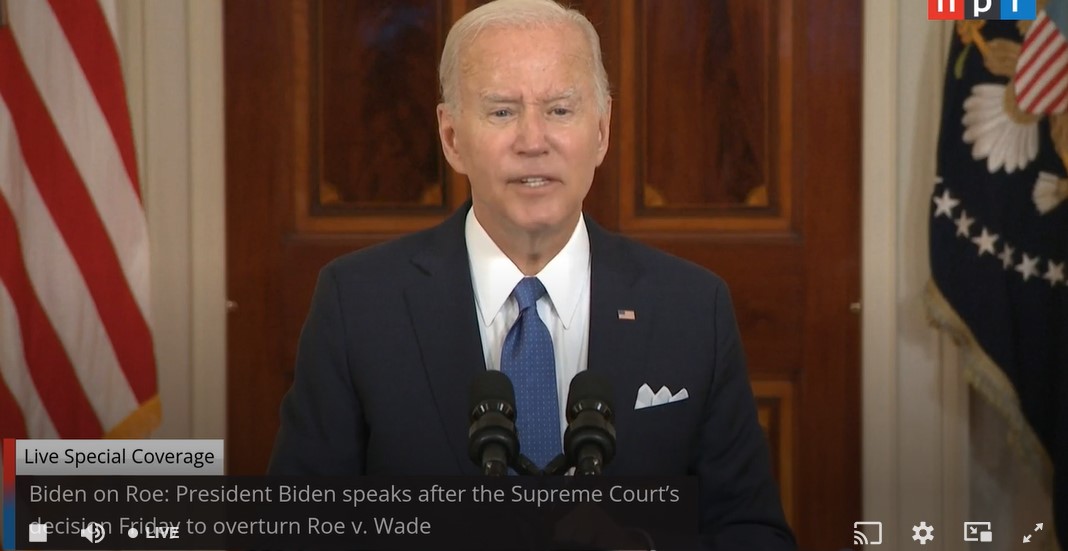 In breaking news this morning, NPR reported “In a 6-3 vote along ideological lines, the Supreme Court has ruled in favor of a strict Mississippi abortion law. It also overturned Roe v. Wade, the 50-year-old case that was the basis for legal abortion across the United States.”

“It’s a sad day for the Court and for the country”, said President Joe Biden in a live address at 10:30 a.m. on June 24 following the Supreme Court decision just hours ago to strike down Roe v. Wade. “This decision must not be the final word..Congress must act…Voters must act…Roe is on the ballot this fall,” he continued. In writing their opinion, Justices Stephen Breyer, Sonia Sotomayor, and Elena Kagan said “With sorrow—for this Court, but more, for the many millions of American women who have today lost a fundamental constitutional protection—we dissent.”

“Roe was egregiously wrong from the start,” Justice Samuel Alito wrote for the majority. “Its reasoning was exceptionally weak, and the decision has had damaging consequences. And far from bringing about a national settlement of the abortion issue, Roe and Casey have enflamed debate and deepened division. “It is time to heed the Constitution and return the issue of abortion to the people’s elected representatives,” he continued.

Regardless of one’s political views, this decision is sure to have wide repercussions and many of them immediate. Multiple states with so- called “trigger laws” are poised to swiftly enact their own varying, severe restraints on a woman’s right to choose and to obtain necessary medical care. Some reach beyond the women themselves, affecting providers and even potentially the ability to obtain FDA-approved pharmaceuticals, used to treat miscarriages as well as provide a safe termination to an early stage pregnancy. The Washington Post reports “Abortion will soon be banned in 13 states. Here’s which could be next.”

While there is nothing that President Biden can offer in the form of an Executive Order, he vowed to do all within his power to ensure that states do not exceed their authority, and so that patients can travel to those states where abortions are still permissible.

What remains unseen as yet is the overburdening of resources in those areas, the time and cost of long distance travel for many and the disproportionate burden on people with low incomes and people of color. Colorado’s Governor Polis and his administration have long been supporters of reproductive rights and Colorado remains one of the states open to helping women in this time of crisis.

As reported by Ark Valley Voice on May 3, 2022 the “leaked decision” leading up to today’s ruling also suggest an expansion of overreach and intrusion into other areas.  Managing Editor Jan Wondra wrote:  “Constitutional scholars say that it could trigger a slippery slope of decisions based on its assertion that a woman has no right to privacy in this most personal and difficult decision for her own body. It lays out a scenario in which LGBTQ rights, gay marriage, interracial marriage, and even reproductive health decisions such as birth control could be targeted, as those decisions are based, in part on the right to privacy.”

Biden closed his address with a plea for peace saying “violence is never acceptable”.  A link to the video address is here, courtesy of CNBC