Buena Vista-based USA Women’s Raft Team Competes for Family, the Ark Valley, Woman-kind, and for themselves 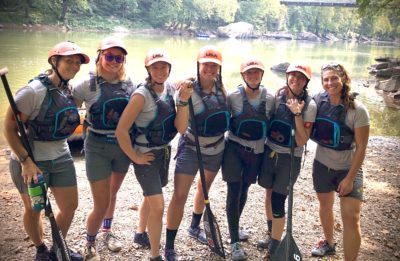 Since 2013, the USA Women’s team, formerly known as the ‘Red Ladies,’ has represented the United States in the international competition.

The right to call themselves the ‘USA Women’s Raft Team’ is earned in the throes of competition.

Tana Deklevar, the USA Women’s Rafting team captain, has been a part of the team since 2012. Deklevar, a Pennsylvania native, came to Buena Vista after working as a raft guide in the Midwest. How did she find herself leading a local rafting team, and competing both nationally and internationally?

“[It was] one of my teammates, Julie Sutton.” Deklevar explained. “It was her second year trying to beat the ‘Teva’ girls (the women’s team sponsored by Teva). We combined forces and eventually won (the National Competition) in 2013.”

The team consists of seven women ranging in age from 24 to 44 years old. Deklevar says her crew is a melting pot of every-day women.

She says these seven women aren’t weekend warriors who take to the river a few times every summer for a little adventure. Instead, in her words, emphasis intended, they love rafting. They know rafting.

“We’ve all been raft guides. Our team is all current or past raft guides,” said Deklevar. She says she realizes this poses potential issues as well.

“This could be a downfall too, you know, too many cooks in the kitchen. Thankfully, we know how to reign it in,” said Deklevar.

Deklevar and the rest of the rafting team are training multiple times a week. These rowing sessions are on top of the workouts each team member does year-round in order to stay in shape.

The ‘off-season’ for the team is usually the months of December and January. During this time, team members are responsible for training on their own. Deklevar says that, for her, this means circuit training, yoga, biking and rowing.

After her weight-training and circuit work, Deklevar says she likes to follow up with a 3,000-meter row.

“I use a rowing machine, the other girls sit by a pool and paddle,” Deklevar said smiling. She did point out that she copes with a nagging back injury.

Deklevar describes the USA Women’s Raft Team as ranking in “the bottom of the top tier.” According to Deklevar, the countries in the category of ‘top tier’ are Japan, Great Britain, New Zealand and the Czech Republic.

The World Rafting Championship competition includes four different disciplines known as Sprint, Head to Head, Slalom and Down River. Each of the disciplines is scored individually, and teams can medal in any, all, or none of each discipline.

This year, during the World Rafting Championship in May, Deklevar says she hopes that this year the team can bring home a medal in at least one of the four disciplines.

“I really feel like this group of women [has] the chemistry to get a medal,” said Deklevar. She said the USA Women’s Rafting Team is grateful for the opportunity to compete, and thanks locals for their support.

“It has been the people, here, in this valley, who have helped us get there,” said Deklevar. She points out the numerous businesses and organizations in the Arkansas Valley who have donated to the team.

Unlike the USA Men’s Rafting Team, which is sponsored by Chaco, and other international women’s teams who receive yearly stipends, the USA Women’s rafting team pays their own way. This includes travel expenses, equipment, gym memberships and other associated costs.

There’s no paycheck waiting for them, and it isn’t likely that the hours spent honing their minds and bodies will be cashed in for fame, glory or lucrative endorsement deals.

So, what drives Deklevar and her teammates to compete? She says she draws motivation from her desire to raise her son to respect woman-kind’s capabilities and resilience.

“Ultimately, I want to show my son that a woman can achieve her dreams and goals. It doesn’t have to be solely the man who leaves the house to go achieve his dreams. Mom can do it too.”

It appears these women also do it for the camaraderie, the desire to engage in competition and to have fun.

“We are best friends. I don’t think it would work any other way. Our personalities are very strong. Even if we seem [reserved] there is still a strength there to be a competitor,” said Deklevar. “If we didn’t mesh well it wouldn’t be fun.”