Richmond thanked the district for the town’s access to gyms for indoor athletic events and shared the town vision that the Rec Department would one day like to have their own gym and rec center.

Some of the department’s major land and property projects include the Rodeo Grounds, the future Boys and Girls Club, the new wave in the river park, and two grants to improve town outdoor areas. 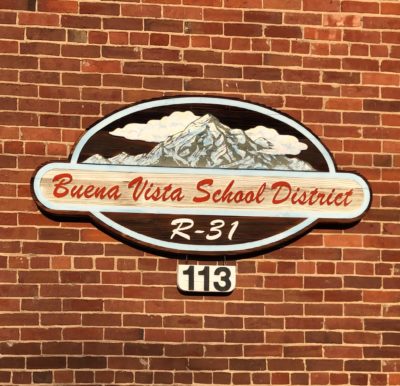 The Rodeo Grounds are just next to the Chicago Ranch, which the town is also looking to acquire. The town will host a community open house on January 20 to hear ideas on what town residents might like to see there, including the potential for a track, and cross-country trails.

The Boys and Girls Club is looking for a new site and will be pursuing a potential flagship building in the space behind the current police station. The space could host students before and after school and could offer gym space for the community to use.

Richmond also discussed the future of a new wave in the river park, the Colorado Parks and Wildlife grant to repair and improve the Whipple Bridge and the Whipple Trail, and the Land and Water Conservation Fund grant supporting the construction of six new pickleball courts, the Walton Loop, and the TaterTots bike track.

Board Member Jessica Crites asked about the space behind New Bees thrift store and what plans the town had for it.

“We don’t have any active plans right now, so if you have ideas, that’s another thing we can chat about,” said Town Administrator Phillip Puckett.

Board Member Nancy Best asked about the town’s use of their recently-acquired Valley Home Furnishings building for the new police station, and Puckett clarified that the department would hopefully be growing into it, knowing that they need around 8,500 feet of the 10,600 feet at the new building.

Principal Christine Bailey of Chaffee County High School (CCHS) focused on the idea of “owning” student success in her report. Students have been updating their snapshot goals for the semester with staff support, and staff have been working with feedback from students.

“That sense of owning student success is a huge part of CCHS,” she said. She was also grateful to hear all the comments during the workshop about the benefit of the student-staff relationships at CCHS. “It’s really meaningful to hear the students recognize that because you don’t see that every day…With all the stuff they’re dealing with, sometimes it feels like they’re so comfortable with us that they also let it all out at us. So it’s great to hear them recognize the importance of that.”

Bailey emphasized student success as a huge part of planning for next year, as they’ll be working with a smaller staff and a smaller student body, and maintaining the programming that has made them successful.

Principal Emily Madler of Avery Parsons reported that they’ve been working with the eight elements of rigorous and responsive teaching and have been using the school board’s “learning walk” as an opportunity for reflection. The staff is exploring what collective efficacy looks like in student work.

Principal John Emilsson of BV Middle School focused on how they are creating spaces of optimism for safe learning with students. The school will take their second-quarter Honor Roll students up to the Dutch Henry Tubing Hill in Leadville (if the snow cover cooperates). Next week, their pep assembly will be a RISE Winter Olympics, which in past years has included  Gummy Worm Ice Fishing and the Winter Weiner Toss.

“We always promote school pride along with the rules of engagement,” he says. The 9th Annual Ice Fishing Festival is planned for February 12, 2022. “We’re also in the works for lots of end of the year stuff, so there are lots of different ways we try to make school fun and reinforce the important stuff.”

Principal Liz Barnaby of The Grove reported on the preschool’s focus on curiosity and creativity. The Fire Department visited before the break, and students could try on and experience some of the firefighters’ gear. Classrooms have also created spaces for “playing with purpose,” where students could play freely and create their own space. One student built a candy machine and went into detail with Barnaby on how it worked.

The Grove is also working with Solvista to teach teachers how to listen to what kids are saying when they are playing.

Principal Jon Ail of BV High School has focused on creating spaces of optimism, noting the student body and staff shared several fun events ahead of the break, including an arm-wrestling tournament.

Ail has talked with the Student Council about planning assemblies and given them the freedom to do their own assembly. They brought him their proposal and plan, and “they nailed it.”

Superintendent Yates thanked the Board of Education for the way that they have led “with conviction and a lot of kindness, just the willingness to listen to the community as well.” Her report also echoed her Monday Minute update, saying that with the COVID surge, they will likely see more students who need to be at home.

“We have more quarantines from households than anything, and that’s impacting those who have remote learning,” she said. They will likely not do any remote learning for elementary students to ease the back and forth for young students. “We are monitoring both COVID cases and absences right now.”

Yates also commented on the inventory of tests in the district. “We have the process in place, but we don’t have tests,” she explains. “My correspondence with the state is to not expect more tests until February.”

She also echoed the gratitude of a “Monday Minute” Zoom attendee that the schools have been in-person.

Board Member Stacey Moss reported that the infrastructure is in place for the electric bus hookup. “It’s in and done but it was a long-time coming.”

Board Members Nancy Best and Tracy Storms sat in on the portfolio presentations by the high school students and enjoyed seeing how far they have come. Board Member Brett Mitchell said the portfolios were amazing and suggested they give more instruction to those watching so they could know how to ask questions and participate.

Mitchell also reported that BOCES (Boards of Cooperative Educational Services) has a lot going on, including its budget and one member’s transition to a new role. He said they’ve done well getting the right people in for professional learning.

Board Member Lynn Montoya said she’s pleased with where the portfolio presentations have gone, after seeing them for several years with the District Accountability Committee. She wants to make sure students understand why they are doing it and to get full buy-in from them.

“I don’t know how that’s going to happen,” she said. “There’s still some kids that question it….But I was super pleased to see the progress from years prior.”

President Suzette Hachmann expressed her gratitude for how many community members came to the work session to express their support for CCHS. Additionally, she received some correspondence about the CCHS impacts and said those notes would be added to the ongoing list.

Montoya nominated herself to serve as the Wellness Committee representative, and Mitchell moved to elect her. Best seconded, and the motion was approved unanimously.

The last item was the preparation for the interim evaluation of the superintendent for the next meeting. Hachmann explained that the evaluation would be sent out. Then, Board members will fill it out, Hachmann will compile it, and Yates will go over it before the next meeting.