The Buena Vista Board of Trustees (BOT) convened their regular bi-monthly meeting this past Tuesday, July 26 with a unique addendum to the agenda. The usual work session held before each public meeting was replaced with a special meet-and-greet with BV Town Administrator candidate and hopeful Lisa Parnell-Rowe. 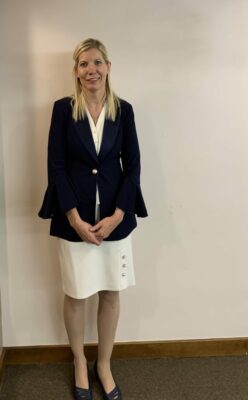 The finalist for the Buena Vista Town Administrator position, Lisa Parnell-Rowe was the special guest at the July 26 Buena Vista Trustee’s meeting. Photo by Landon James,

One slide referenced an article by Christina Benty entitled “The Seven Vital Qualities to Look For in Your Local Leader”.  The vital qualities outlined in the article are: prepared, relationship builder, team player, approachable, emotionally mature, financial acumen, and critical thinker. Parnell-Rowe made a commitment to embody each of these characteristics to the fullest if she is given the opportunity to become Buena Vista Town Administrator.

After concluding her presentation, Parnell-Rowe fielded questions directly from the BOT and then took the time to shake hands and greet each person in attendance.

Phillip Puckett, currently the acting Town Administrator and Town Treasurer, began the reports with an announcement that ground had been broken on the new Buena Vista Police Station with a projected finish date of Spring 2023.

In April 2022, the town board approved a purchase agreement of $1.2 million which is to be paid off in installments of $400,000 each, over the course of the next three years (2022-2024). In addition, Puckett proposed an additional $50,000 be allocated from the Water Fund to cover engineering and legal costs that are part of water court proceedings for the Bray-Allen Extension. The amendment to the original budget for the Bray-Allen Extension purchase was unanimously approved. 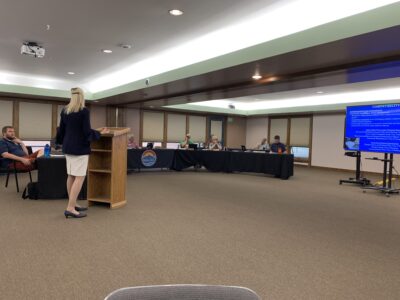 Lisa Parnell-Rowe presents to the Buena Vista Board of Trustees and public on July 26. Photo by Landon James.

She petitioned for support of her efforts to construct a 4,400 square foot childcare facility on Carbonate Street, which she said would serve the town for at least the next five to 10 years. She explained that area childcare facilities are severely understaffed and underprepared to support the level of childcare needed to serve the community and asked for support.

“I have intense hope that Carbonate Street will become a reality”, said Lamb. Although Lamb is prepared to spearhead the project, and knows the basic parameters by which the facility would need to be built, no firm pathway forward was established regarding executing this plan.

The proposed 4,400 square foot facility would aim to serve 46 children ranging from three months old to six years of age. This would include one preschool, two toddler, and one infant program room.

Lamb presented the BOT with several possible funding/grant options including the Community Innovation and Resilience for Care and Learning Equity Grant, Employer-Based Childcare Grant, and the Emerging and Expanding Childcare Grant Programs. As of the July 26 BOT meeting, the childcare facility has not applied for any of the grants; they are options they are eyeing as possible funding avenues.

Currently, Shining Mountains Montessori School is an official Colorado Childcare Assistance Provider (CCCAP) and is seeking the support of the BOT to proceed with funding plans to make a new childcare facility a reality on Carbonate Street.

Per the direction of Planning Director Joseph Teipel, a motion was put forth to commit to building the core and shell of the future facility while simultaneously asking the BOT to “commit to the unknown” regarding the future of this project. It passed unanimously.

Gray presented the proposal, which, if passed, would provide regular and consistent annual funding to support housing projects.

Aside from providing more housing, benefits would include allowing local businesses and the town to recruit and retain workforce talent. She acknowledged that the need is outpacing the supply.

“The resources are never going to match the needs,” said Gray.

According to Gray, county rents have increased 50 percent since 2016, and 49 percent of renters cannot afford more than $1,000/month. Only nine percent of county residents have the income to enter the local housing market, and that the average home price increased 41 percent between 2020-2022.

To address this ever-growing issue, Gray announced that the Chaffee County Housing Authority Board of of Directors had voted to approve a 3.5 mills “ad valorem” tax increase to all local property owners in order to begin funding county housing projects.

Immediately, there was resistance from the BOT and Trustee Devin Rowe and Trustee Cindy Swisher who expressed their concerns about raising taxes on homeowners who are already struggling. Swisher pointed out that property taxes on her own personal property and business property have already been raised over the past several years and any more elevation raises concerns with her and other homeowners.

Rowe pointed out that if property taxes are raised on local homeowners then it is highly likely that rent will be raised exponentially on current and future renters. Gray immediately acknowledged the trustees’ concerns and elaborated on the details regarding the proposed ballot question.

Although Gray could not answer whether this tax increase would result in landlords raising rent, she expressed her hope that this measure would also raise awareness of unfair landlord and renting practices while simultaneously protecting renter’s rights.

Despite hesitation from several members of the Board, Trustee Swisher made a motion to put the proposed tax increase on the local election ballot and allow the residents of BV to decide for themselves. The motion was passed with unanimous support.

Planning Director Shawn Williams reviewed a proposal to approve a Notice of Award (NOA) to Stanek Constructors in the amount of $12,000 for the Water Treatment Plant Expansion Project, and the role of Construction Manager At Risk (CMAR) In addition, Williams sought approval for a Design Phase Services Agreement with Stanek Constructors to see this project through.

After a lengthy and detailed breakdown of the project and legal paperwork, in addition to providing background on each Stanek Constructors employee involved in the project, a motion was made to approve Resolution No. 57, Series 2022 giving Stanek Constructors permission to begin work on the Water Plant Expansion Project. It passed unanimously.

Planning Director Joseph Teipel reported on construction progress for the new BV Police Station. The Town has officially received the $600,000 DOLA Grant allocated for the construction of the new facility.

Construction has commenced with demolition work. As of the July 26 meeting, ductwork, plumbing, and exterior water line replacement are all underway.

The BOT unanimously approved Resolution No. 58, Series 2022 for  the full construction contract with MW Golden Constructors in the amount of $4,078,238 for a Guaranteed Maximum Price (GMA) contract. This means the Town can be assured the price will not exceed this amount, barring some monumental setback or major unknown conditions coming to the surface during construction.

Phillip Puckett then took the floor to kickoff the 2023 budget budget process. He quickly went through 2023’s projections and compared them with 2022’s numbers. Fiscal 2022-2023 will mark Puckett’s first year as Town Treasurer and the BOT expressed their excitement and satisfaction with Puckett’s projections for the upcoming year.

Puckett then moved into the 2022 mid-year pay plan update. After discussing several different options and addressing the ever-growing inflation crisis and how it affects the Town’s staff, Puckett proposed a four percent cost of living adjustment (COLA) pay increase for all current staff.

Puckett said this option would provides relief to Town staff while still allowing time to evaluate other factors during the 2023 budget process. Puckett said the Town would still expect an additional COLA/Merit increase for 2023.

A motion was proposed to approve the four percent COLA pay increase and passed with unanimous consent.

The final item on the docket was the proposal for the Town Administrator to opt-in to retaining opioid settlement funds and then sign an intergovernmental agreement with Chaffee County to redistribute the money to Chaffee County Public Health for opioid response and relief efforts. It passed with a unanimous roll call vote.

Recreation Supervisor Shane Basford also announced that construction of the new pickleball courts has begun and the projected completion is October of this year.

The next Board of Trustees meeting will take place on Tuesday, August 9 in the Piñon Room of the BV Community Center.