In a recent Buena Vista Trustees work session, the topic was in-town camping; specifically the use of recreational vehicles (RVs) for camping on public and private property. The topic has become a hot button, as the county’s work force housing shortage has intensified, and major entertainment events make it financially attractive for home owners to allow RVs to park and camp for long periods of time on their property.

“We’re looking at staff processes, with the intent to update the code to make a fair process for those with RVs who are using them on their property,” said Town Administrator Phillip Puckett. “The other things, the HOAs, those with camping businesses – it isn’t our intent to restrict their use, but to clarify the rules.”

The current code allows for people to park RVs on their lots up to 60 days. The town’s priorities for code adjustments were reiterated. Principal Planner Mark Doering said the town plans to enforce no camping rules for RVs on public property, reminding the audience that this ties no overnight parking to no overnight camping. Seasonal camping with a temporary use permit would be allowed in a single zone (I-light industrial), but requiring access for toilets, potable water, a start and end date and a point of contact. “This is the strict start-end date and a set back from 100 ft. from property line,” said Doering “It might also be time to look at private property impact fees….as we become known for special events, we need to support rules that protect other private property.”

Adding a code section to allow RV camping 21 user days within a calendar quarter (instead of the old 16 days per month) was discussed. Trustees noted that the town should allow a “camping with our kids” clause for families, but that the rest of the code process should be followed. “If you and your kids are camping in your yard….that’s one thing,” said Puckett. “If cousin Eddie shows up and is there 21 user days in a quarter, then a permit would be needed.”

Trustees’ discussion included the possible need for a code section on storage, noting there is a difference between someone storing an RV, versus someone living in an RV. A few pointed out that they knew that RVs were being lived in, even while the property owner said the RV was being stored. Asked about whether, if a person owned a lot that is two taxable parcels, would that constitute two user days versus one, the Planning Department responded that each tax parcel would get 21 user days per quarter.

“We don’t want this to feel like a campground in town,” said Puckett. “Just because something is a larger parcel doesn’t mean they can park an unlimited number of RVs. It [the parcel] might be surrounded by other homes and would look like a campground.”

Other concerns were whether or not the town should have a rule about collecting rent for RV parking, and whether anything that is being treated like a short term rental, the town could have it registered and collect a fee. The town is trying to limit continuous camping use, allowing only property owners and immediate family of the residence, to stay in an RV. If someone wants to live in the RV, then that would become a permit situation.

“There has to be a fee associated with this,” said Mayor Duff Lacy. “I could see a grace period [before we begin charging], but we need to charge something.”

“We’re trying to keep neighborhoods, neighborhoods,” said Doering, “so we’re trying to regulate camping. We have tons of people who buy property and don’t intend to move here for years – this is a problem because there are a lot of vacant lots in town.” 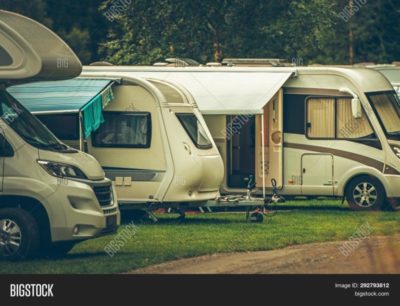 RVs are increasingly being relied upon for affordable housing options across Colorado as the housing shortage has worsened. Courtesy image

There is a section in town code that lets people live in an RV on site, while they are building their home. This would appear to be a different situation than someone parking a 5th wheel on a lot for years, with no intention of building. The town has no public dump station to service RVs and it currently has no definition of what constitutes a vacant lot.

“With a vacant lot, there’s no water, no sewer, no resources, unlike other properties that have some facilities,” continued Doering. “We’re trying to protect our water sources too.

As the town considers code changes, it has to consider how to efficiently enforce the codes and reduce the potential for conflict. “It’s not perfect, but we feel like this is a balance,” said Puckett. “We’ve heard extremes – from absolutely no camping whatsoever – to ‘I want to have as many people as I want, who can show up whenever, and stay with no end in sight.’”

As Trustees grappled with the topic, they raised other issues. For instance: if a vacant lot is attached to a residence as a joint tax parcel, what enforcement rules apply? If that lot was across from the elementary school, can the RV go without sanitation?

Mayor pro tem Libby Fay asked “What would happen if a property owner has a family reunion with 10 RVs that camp out for a week? (Totaling 70 user days, using up their full year of permitted camping days.)

“So if there is a 20 acre site behind my house – would you be able to permit that whole lot – could you have 21 Rvs out there then?” asked Trustee Cindie Swisher.

Lacy pointed out that the town has to be able to enforce what it puts into code. With hundreds of vacant lots in town and larger parcels in town that could potentially be covered in RV campers, this has to be sorted out now.  He added “with the number of special events such as Paddlefest in and around town, people show up who have camped in the same places for years. Some of them are on undeveloped lots and they even have campfires. Just because a lot is empty, does that mean that there is a right to put an RV on it?”

Puckett responded saying, There is no occupancy right attached to an empty parcel. Our current code allows for people to park their RVs on their lots up to 60 days.”