Buena Vista’s Board of Trustees discussed a draft Water Master Plan, explored a number of housing grants and other grant opportunities, and heard a variety of reports from town staff at their September 14 regular meeting.

Town Administrator Phillip Puckett reported that the town staff is continuing to work with the Chaffee Community Foundation to finish up a development proposal for the Carbonate Street project and are considering a public input campaign in September and October ahead of a presentation to the board. 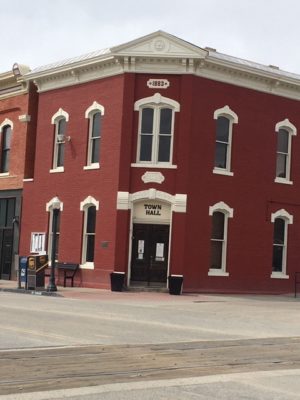 Puckett also said that the board would see a budget overview presentation at their next meeting on September 28 and laid out a schedule of budget hearings and work sessions, aiming to adopt the 2022 budget at their regular meeting on December 14.

Police Chief Dean Morgan discussed the department’s recent training on arrest control, upcoming special events, and the demands of these special events on the police department.  Morgan said that the wide variety of upcoming events like the Community Dinner this week, the 14er Fest, and Meet Me at the Creek, taken together, spread the department thin. The Buena Vista Police Department will also be hosting Coffee with a Cop at Brown Dog Coffee from 3:00 p.m. to 6:00 p.m. Oct. 6.

Recreation Director Earl Richmond reported that the Recreation Department is working on applications for a number of grants for 2022, including the 2022 GOCO Communities Impact Grant, the CPW Non-Motorized Trails Grant, Land and Water Conservation Funds Grants, and SWCC Trail Crew Grants.

Additionally, the Boys and Girls Club of Chaffee County has signed a Letter of Intent (LOI) with the town for a new flagship campus on town property. The town will be involved in all conversations regarding the design and planning.

The town also held its first Heritage Days, inviting locals of diverse ethnic backgrounds and with adopted family members to come together to share their backgrounds. “We had a great dinner down at the river park,” Richmond says. “It was great to see all these families come together.”

Richmond’s report also outlined a few proposed changes to special events permitting, including no more permits for non-sports tournament-related events on playing surfaces, no more permits for additional special events on July 4th as well as 48 hours before and after, and incorporating debriefs with event organizers after events to share feedback and get information for following years.

The board also approved a resolution approving a public improvement agreement between the town and Richard Molitor for some improvements at 330 E. Main Street, including curb and gutter improvements, landscaping, erosion control, and right-of-way improvements.

Mike Glade and Trish Flood of Wright Water Engineers presented a draft Water Resources Master Plan with Special Projects Manager Joel Benson. The water plan is generally updated every five to seven years. “We started the project in the spring and have really been diving into some of the information more so than in previous plans, so it’s taken ‘until now to be able to be in a good position to present what we think is a solid draft water master plan.”

“We looked at a number of different growth scenarios to prepare the plan and pointed to recent growth rates for the town to construct their report,” he added.  Glade also pointed out the importance of having action plans for water resource planning.

“We provided some recommendations on how to plan for and meet future water demands, something you can act on,” he says. “It’s very important to Wright Water and those within the town staff to have some action items. What can you look at? Where do you need to go? What can you budget for? What are the next steps and milestones? That’s something we tried to include in the report, and we’ll continue to work with staff on that.”

Glade also highlighted the importance of conservation efforts in the town as part of the water plan. “Conservation is something the community can do that doesn’t cost a lot of money,” he said. “If the citizens of the town take action and conserve, every drop that they conserve can be used toward future growth.” He also pointed out that water rights acquisitions can support new needs as the town continues to grow.

According to Glade’s report, there’s been a recent trend in lower precipitation annually, as well as a population increase connected to increased water demands and use. Dry years are “the line in the sand,” Glade said, and pointed to their calculations for how much growth the town could sustain in a dry year. Based on those projections, within 10 years the town may face severe water stress in dry years. The town’s water infrastructure also has current needs of which the town is aware, and is working on.

The board then moved on to a review of the new Board of Trustees handbook and moved to put it on the consent agenda for a future meeting. They also looked at a few vacancies on the Chaffee County Housing Authority Board and the Airport Advisory Board. Presently Joseph Teipel and Phillip Puckett serve on the CCHA board. However, there is still a vacancy on the board for a one-year term. Puckett asked for a motion from the board regarding the appointment.

The Board of Trustees can appoint either a trustee or a community member based on a recommendation from the housing authority. CCHA has received three applications from community members. “I think it would be cool for a town resident to be involved,” pointed out Trustee Norm Nyberg. Mayor Duff Lacy agreed, saying that it could be good to have someone really immersed in the community on that team. The trustees decided they will make an appointment based on a recommendation from the housing authority.

Trustee Gina Lucrezi volunteered to be the trustee liaison for the Trails Advisory Board in place of Trustee Dave Volpe, and the Airport Advisory Board vacancy remained unfilled at the close of the item.

Planning Director Joseph Teipel also introduced two grants from the Colorado Division of Housing that the town is working on applying for, in order to support affordable housing in Buena Vista. The planning grant works to support planning, research, and other actions to see what can be added to existing strategies or improved on with current approaches. Teipel estimates the town’s request to come in at around $50,000, with a 25  percent match of $12,500. The incentives grant supports the implementation of a variety of investment and improvement options. The town would submit a letter of interest for their desired amount, and would likely not hear back until mid-2022.

“The Board has brought up in the past, ‘What are some other tools or parts of our code that can help shape the type of housing that we’re trying to get more of?’” Puckett added. “I think this is a great opportunity through the Department of Local Affairs’ (DOLA) to get that back to us.” The board moved to proceed with the grant processes.

The board also moved to direct Mayor Lacy to sign two letters of support for local grant pursuits, one for the Chaffee Housing Trust’s application to the Colorado Division of Housing for Community Housing Development Organization (CHDO) funding for 2022 and the other for Colorado Kayak Supply’s (CKS) application for the Colorado Community Revitalization Grant.

CKS plans to build a “permanent home for their established business and mixed-use options that offer housing, creative spaces to support creative industry initiatives, and preservation and maintenance of the historic 1885 Palace of Joy brothel.” They will partner with Buena Viking, who purchased an adjoining lot.

CKS would also be using a few of the housing spaces as short-term rentals in order to pay for the project and has been working with the Historic Preservation Committee to support the preservation of the Palace of Joy building.

The meeting closed with a brief trustee-staff interaction space. Trustee Libby Fay shared that she received a letter asking the board to do what they can for workforce housing to preserve local restaurants’ staff, as well as a number of “vehement complaints” about the Post Office (about what was not covered). “Tempers are rising, from what I hear,” Fay said. “That’s an issue I’d like to see us address and see how we can help.”