Dispersed camping is creating some anxiety these days among people who’ve dealt with the after-effects of poorly tended campsites, and from those who worry, rightly so, about the increased risk for wildfire that comes with illegal and unattended campfires around Chaffee County. 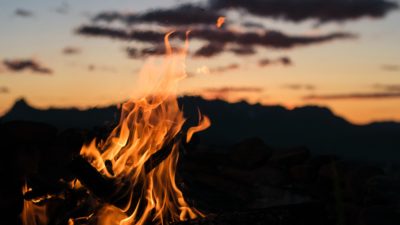 Campfires are a mainstay of camping, but poorly managed fires are a significant risk for major wildfires. Image: Unsplash/Colter Olmstead.

Regarding the latter, Buena Vista’s board of trustees voted unanimously Tuesday evening to fund the full request of $7,500 for the new Chaffee Front Fire Patrol, which will provide two firefighters and wildland fire equipment to patrol common problem areas on weekends from Memorial Day Weekend through the end of September. With an estimated 2021 project cost of $30,000, the idea is to gather additional support from Chaffee County and Poncha Springs as well as grant matches from Chaffee Common Ground.

The explosion in Chaffee County’s tourism is driving the decision for the patrol. Prior to 2020, it was estimated that the county saw more than 4 million visitors annually.

It’s now estimated that those figures doubled in 2020 as record numbers of people fled cities for downtime in the mountains during the COVID-19 pandemic. It quickly became clear that many of those people lacked camping etiquette, including basics such as checking local fire restrictions and extinguishing campfires.

Near Buena Vista, the Four Mile and Midland areas are the major concerns.

The patrol won’t be a police presence. Rather, it will be an on-the-ground effort that can respond to reports, as well as communicate with people who may not understand the details of camping safety. “It’s around education,” said Chaffee County Fire Chief Robert Bertram. “We’re not going out writing tickets, we’re teaching people about fire restrictions… proper campfire etiquette… most people we come across don’t realize what the restrictions are.”

Cindy Williams, the co-chair of Envision Chaffee County, said opinions were loud and clear in the recent Chaffee Recreation Survey. “One of the things we’ve heard all of the way through the process from the community is an anxiety about dispersed camping in the county.”

She noted, for example, that there are an estimated 5,000 motorized-access dispersed sites in the county, many of them in high-fire-risk areas.

Not surprisingly with the increase in tourist and camping traffic, Chaffee County Fire responded last year to the highest number of incidents in the department’s history. That included record numbers of responses to illegal and unattended campfires.

Not coincidentally,  2020 also saw three of the biggest wildfires in Colorado’s history, with two of those fires caused by humans. With 2021 carrying over from an exceedingly dry 2020, fire officials are projecting an early start for this year’s fire season, and say they are in dire need of getting the Chaffee Front Fire Patrol in place.

The Wildland Fire-certified personnel will be slated for each Friday and Saturday, focusing on campfire times – 4:00 p.m. to sunset – with a sweep through camping areas on Sundays to ensure campfires are out. Additional crews available will be available on busy holidays.

The board entertained a brief discussion about funding such projects, although it was also noted that the town is continuing to bring in more sales tax revenue than budgeted.

“As long as it’s (funding) there, I sure support a program like this,” said Mayor Pro Tem Libby Fay.