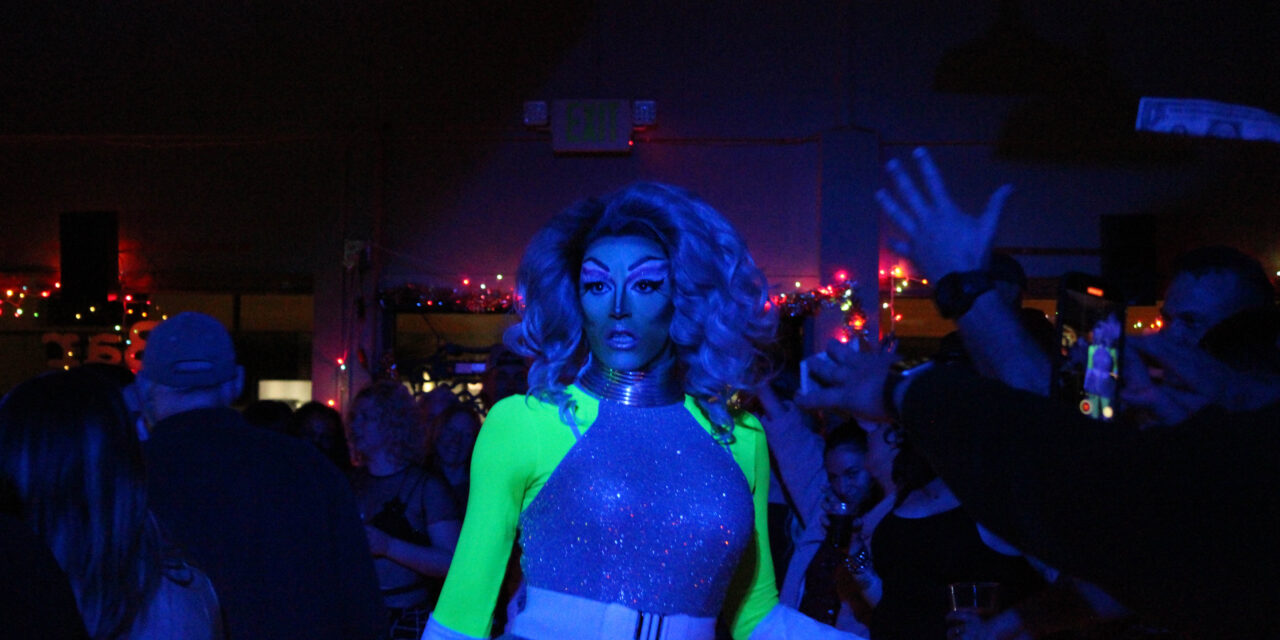 The bar is packed. The crowd is buzzing. The lights are casting red and green shadows on the frosted windows. Buena Vista’s first-ever drag show is about to begin.

Mary Quinn, onstage as drag king Chad, takes the mic to introduce the host of the show: an almost-glowing green drag queen. Aria Pettyone (“Petty One”) glides into the room to thunderous applause, cheers, and flying dollar bills, kicking off the evening with a bang and glittering stilettos.

Quinn and Pettyone hosted the event, held on December 4 at Push and Pull on Main Street in Buena Vista (BV), and shared the stage with other drag performers, two of whom were local first-time participants.

“You can just feel that Buena Vista just aches for this,” Quinn says. “And the smiles on people’s faces when [the performers] dancing and all that it was just….Oh, my heart was just so full.”

That high energy stayed throughout the evening, with audience members basking in the excitement, the loud music, and the joyful fun of the performances. Performers Aria Pettyone and Electrix Cute joined from Durango, while Lily Claire, Frankie, and Chad all hail from Buena Vista itself.

For Claire, portrayed by Connor Lastly, being part of the town’s first drag show was not something they ever expected, but they’re grateful to have had the opportunity. Quinn had invited them to join the show while they were working together, and dressing up for the show soon led to them agreeing to perform a song, and then two songs. After Thanksgiving, they added the costume supplies to their Amazon cart and sent the order.

“It felt…really good, really fun,” Lastly says of their first drag show. “Everyone in the crowd was really supportive and nice. I really appreciate it. I told [Mary] thank you, as it was this cool opportunity here and something that I don’t think I would have thought to do or that it would be something I’d enjoy. But since someone asked me to do it, I was like, ‘oh yeah, this is definitely right up my alley.’” 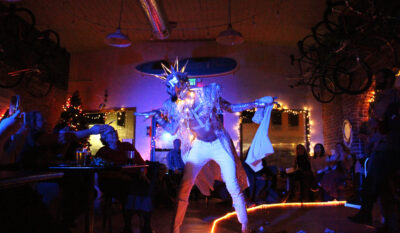 “I think people in smaller communities think they have to be like a RuPaul-caliber queen, and no! We’re in a small town…A lot of it just is the confidence to go out and do it,” said Aria Pettyone, host and performer. “And I know that sometimes in small towns that can be scary, but honestly I think people really just love it and accept it and want it. People love drag. My nieces talk about it all over TikTok, so I imagine adults would love more drag. I just think it’s something that everyone can enjoy and find something that they love about it.”

Pettyone is an experienced queen, performing being their full-time job in Durango.

“I’ve been doing shows down there for about two years now,” Pettyone says. “Now I get to come out here and do shows in Buena Vista.”

Pettyone, who got her drag start in Durango, feels that going out and sharing drag with small towns is part of giving back to the “queer-munity” that welcomed her in Durango. “All I wanna do is keep letting queer people in small towns know that they are visible, they are allowed to be here, and they can thrive where they are, too,” she says. “As long as I can do that with queer people, that’s what makes me happy.”

Pettyone got into drag after volunteering with Durango’s Four Corners Alliance for Diversity, she explains, street lights glowing off her red velvet dress and silver-white wig. After volunteering for Pride events and their yearly Drag-rango event, “I just kind of realized that I was really good at this, and then I thought, ‘The drag part looks fun, too.’” Soon after, what started off as a one-time gig became a full-time job.

“It’s been a great time,” she says. “I just try to give back as much love as I get from everyone else.”

Beneath the sharp makeup and the extravagant outfits and the artistry of the performances, drag is also a place for all to come together and celebrate.

“I think it’s a really safe space to express yourself in a beautiful craft and then have the community come together and celebrate that craft,” Quinn explains. “There is a community here that is hidden because they’re scared. If we can add a little fun and open-heartedness, we can grow so much more after that.”

Quinn also explains that another goal for her is reaching out to the youth here, her voice softening. “I know this is more of a serious note, but I mean, after 2020 and COVID and all of that, it’s scary…And what helps is art and creativity, bringing people together as safely as possible, and making sure that our youth feel heard as well.”

Hosting the first-time show was also a big part of the night for Pettyone. “Being the first drag queen to host a show and perform for you guys was just the most humbling and amazing thing for me,” she says. “Being here and being a part of this night was such a blessing. Everyone has just been so kind and warm and appreciative of me coming up here….The energy is here is so great, and it’s the appreciation. Small towns really appreciate drag, but they don’t get it a lot, so when they do get drag they really appreciate it.”

“It is the most amazing feeling, especially a sold-out show,” she says of the hosting experience. “I told Mary, ‘Pack the room and that’s all I need!’” 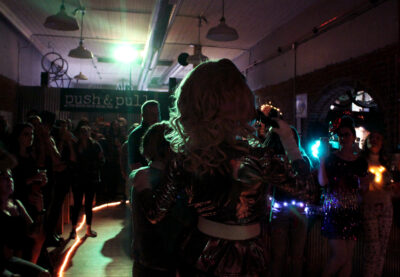 Though the show sold out and was popular enough to inspire future shows, there was still some concern about pushback. Quinn was worried that the town wouldn’t respond well to the show.

“I don’t have many ties to this town quite yet,” she explains, “And it is a very conservative town….I’m not here to ruffle any feathers. I want to show that we do exist and that it is safe, we can have a safe community. I’m not here to throw it in anyone’s face, but I am here to show that there is space for it.

“I feel like there was a lot on the line for this show, and Push and Pull was taking such a risk on us,” Quinn continues. “And [we had] that good pressure…of putting on an excellent show and making it professional. I think one of the biggest differences [from other shows] is that I was fully involved in it and the outcome of it was just incredible because of the community and who showed up.”

As for the future, Lastly feels confident they’ll perform again, possibly in future BV shows, and is excited to see what things they can add to and change about their performance. They’re looking forward to trying new songs and doing shows with more genre freedom.

“I can change up different things, and also this one was Christmas music, and I realized afterward that’s probably a lot more fun,” says Lastly. “You’re dancing to the songs that you actually liked to listen to outside of drag.”

By the end of the night, audience members were asking when the next performance would be, if performers would be returning and if new drag queens and kings would be taking the stage. Thus, Quinn’s begun planning upcoming drag shows and comedy nights.

“We took a leap of faith,” says. “And we landed on a foundation that we can definitely grow on from here.”

Quinn already has a double-header set for early February, titled Love is a Drag, and is looking forward to seeing the community come together again. “I hope BV keeps showing up,” Quinn says. “Show up for the LGBTQ family, show up for the dancing, and show up for the good time.”