In a ceremony witnessed by Buena Vista Trustees and members of the public, four new firefighters were sworn in Tuesday evening, March 10 during the regular trustees meeting. The event marks the first swearing in of a fully-paid staff in the history of the town. 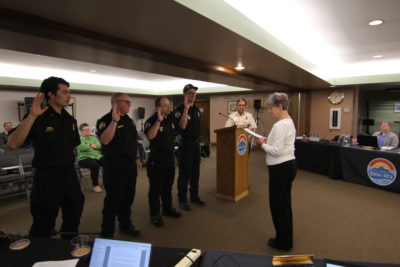 “This is a big night for the town and the BV fire dept.,” said Fire Chief Dixon Villers. “Having the first paid firefighters for the town has been a long time coming. Now we’ll be better able to serve our community.”

Town Clerk and Recorder Paula Barnett conducted the swearing in and then supervised the signing of their contracts. In addition to Chief Villers, the four paid firefighter staff now under contract to the town include:

“This is a good leap forward for us,” said Mayor Duff Lacy.