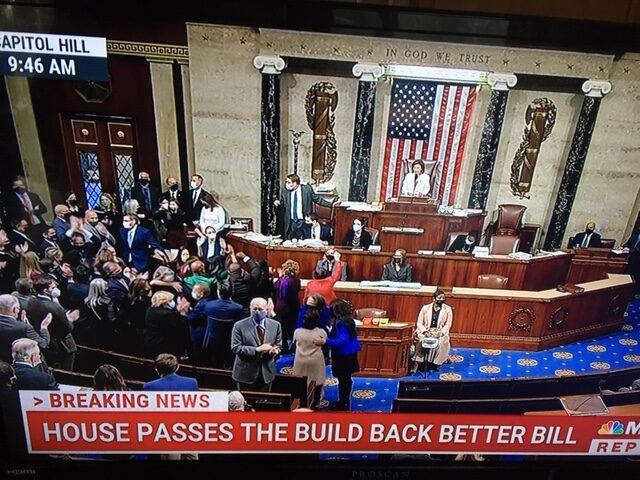 “This is monumental. This is historic.” That’s how the U.S. Speaker of the House Nancy Pelosi referenced the passage this morning of the Build Back Better Bill by the House of Representatives, in a press conference following the vote. The $1.75 trillion human infrastructure bill passed the House 220 to 213, in a unified effort combining Democrat moderates and progressives, with one Democrat voting no. As expected, not a single Republican voted for it.

“This is the third leg of the stool,” is how Representative Jim Clyburn referenced the bill, noting that since Jan. 2020, Democrats have passed the American Rescue Bill, and the $1 trillion Infrastructure Act that will improve America’s roads, bridges, public utilities, and broadband and build an electric vehicle recharging grid. He added that this “third leg” is the human infrastructure needed by American workers and families to begin to move ahead, so that they, not just the rich, could begin to prosper too. 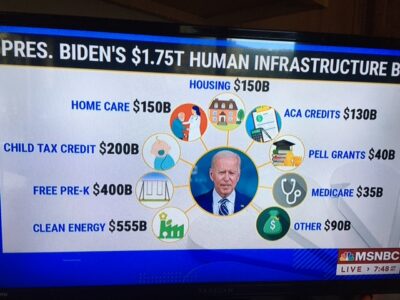 The bill incorporates several things that Democrats have tried to do for decades; tax credits for consumers, and several family care provisions; free pre-kindergarten for all children, childcare not to exceed seven percent of a family’s income, an extension of the child tax cut, paid family leave, additional Medicare benefits for seniors and workforce housing.

It also includes some $550 billion to begin to deal with climate change — clean energy provisions for electric vehicles, a nationwide recharging grid and solar energy — representing the largest outlay ever to prepare the  nation to address climate change.

The vote had been called for late yesterday, but Minority Leader Kevin McCarthy took it upon himself to deliver a more than eight-hour speech that went into the early hours of the morning, railing against the bill and a laundry list of other complaints; immigrants, inflation, taxes, lack of support for small business, why the wall hasn’t been built, more spending for the military, election integrity and just about anything else that would fit into an eight-hour timeframe.

A moment of levity in McCarthy’s speech occured, when he commented that no one voted for Joe Biden to be FDR (whose social programs pulled the U.S. out of the Great Depression) someone on the House floor said “I did”, and from another direction, another representative added, “So did I.”

The bill will move on to the U.S. Senate in December, where it faces an uncertain future. In offering support for the bill, Colorado U.S. Senator Michael Bennet released the following statement after the U.S. House of Representatives passed the Build Back Better Act:

“It has been a long time since the American people saw the federal government working for them and believed that anything we did in Washington made any difference in their lives. With the Build Back Better Act, along with the bipartisan infrastructure bill, Americans will finally see themselves in the work we’re pursuing in Washington.

“The Build Back Better Act will make the largest investment ever to fight climate change and protect America’s forests. It will make child care more affordable and preschool more available to millions of families across Colorado and the country. And it will continue the Child Tax Credit that has supported over 90 percent of kids in our state. The Senate now has an opportunity to strengthen the bill even further to support working families and grow the economy from the middle out.”