Business is brisk at the Chaffee Landfill

Business at the Chaffee Landfill and the county’s recycling locations has been brisk this winter, according to landfill staff, who gave their monthly report to the Board of County Commissioners last week. Income in January alone was nearly double from last January 2019, totaling more than $135,000, as compared with just under $68,000 for the month last year. Average daily fees in January were two and a half times higher than a year ago, and the number of customers rose by 23.6 percent.

Construction materials received during January 2020 at the landfill ran 1,827.4 tons, versus 435.8 tons during the same month last year. The amount of materials being handled reflects both a continued rise in construction activity throughout the county, as well as the processing of materials as a result of the Buena Vista School District High School and Middle School demolition activity.

As the country’s landfills fill up, counties, including Chaffee County, are paying more attention to the speed at which landfill capacity is being used. In the past year, Chaffee County invested in a high capacity grinder, an $800,000 investment in equipment to further reduce the volume of materials coming into the landfill.

Discarded tires are one example of landfill materials that can be reduced in volume. “We’re using the grinder and nearly done with processing the tires at the landfill,” added Wilcox.

One environmental issue being faced more frequently across the central Colorado mountains is how to handle refuse during high wind conditions. The landfill is not open for drop-offs when sustained winds of 40 miles per hour (measured at five to 10-minute intervals) are experienced during a 30-minute duration, or when wind gusts equal or exceed 55 miles per hour.

The landfill is open when winds are measured at less than 35 miles per hour for 15 minutes straight. Chaffee County uses on-site wind monitoring devices to determine wind strength and duration. To make up for early closures due to wind conditions, when the landfill closes at any time during the last two hours of the day, it opens the next day at 6:00 a.m., except on Saturdays.

The wind situation doesn’t just involve materials at the landfill but considers how to anchor the refuse during the transportation of materials to the dump.

“We probably need to add definitions of what are ‘covered loads,’ so that trash isn’t blown off,” said Commissioner Greg Felt. “Things like people putting slash on top of loads that fall off. Old panels or mattresses can anchor it in, but it depends what the load is – as to how to anchor it.”

“Heavy stuff is one thing, leaves and grass are another,” said Wilcox. “My opinion is that we shouldn’t be enforcing this; it’s a highway thing, not a landfill thing.”

The commissioners agreed, and Assistant County Attorney Chip Mortimer will look into the Colorado Department of Transportation guidelines for refuse transport. 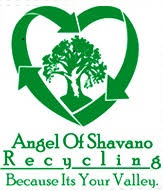 Angel of Shavano Recycling, LLC is a private recycling firm based in Chaffee County that contracts with the county to handle recycling materials. It collects cardboard, plastics (#1-7), aluminum/tin, all colors of glass, paper and newspaper. It works with Salida Schools on recycling efforts, manages the Salida Hot Springs Aquatic Center Recycling Site, and processes the waste management collection at its Poncha Springs location.

All materials collected by Angel of Shavano are sold to end-users, and five percent of sales go to Chaffee County. The challenge, according to Angel of Shavano Co-owner Mickey Barry, global recyclable opportunities are being diminished by global market events. Proctor and Gamble have bought up as much plastic as they could, which is driving down prices, and China has stopped taking most plastics from the U.S.”

“We have a solid market for number one and two plastics, and a small market for number five [plastics], not the rest of them. For us, it would take too long to collect enough to make it worthwhile to transport it,” said Barry.

“Paper and cardboard prices are ticking back up because of the Coronavirus [in China],” said Barry. “The virus has shut down all their mills, and their employees are at home instead of working. To make money and start hiring more people, I need to sort [the plastics coming in].”

He explained that glass requires a separate permit, but that it can be ground and reused nearly endlessly. “That’s what Gunnison [county] used to do … there is a glass grinder, that can process it to use as cover, or we could sell it to Coors. Granulated and pellet plastics can be used for energy – they burn clean. But that’s an end market and requires a power plant.”