The Buena Vista Board of Trustees called their regular meeting to order at 7:00 p.m., Tuesday, January 25. Staff reports, a new historic landmark, and a compensation increase for mayors and trustees were highlighted in the meeting.

The board’s first business item of the night was a resolution and unanimous vote for the Book Nook, located at 127 South San Juan Ave., to be granted Local Historic Designation. The Buena Vista Historic Preservation Commission reviewed the application at its Dec. 2 meeting and made a recommendation to the Board of Trustees to approve the designation. 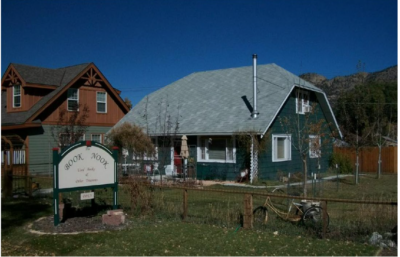 The Book Nook received a Local Historical Designation. Photo courtesy of the Board of Trustees.

“The application met these criteria…has specific elements of an architectural style or period, demonstrates superior craftsmanship or high artistic value, represents a built environment of a group of people in an era of history, exemplifies cultural, political, economic, or social heritage of the community, … and enhances the sense of identity of the community,” said Principal Planner Mark Doering.

“This property was started in 1935… They finished the outside, and it took them eight or ten years to finish the inside,” he added.

Owen Lentz, one of the applicants, said he has always been fascinated by history.

“I’ve always called the Book Nook a historic location, and I’d like to make that official,” Lentz said.

Trustee David Volpe moved to adopt the resolution, which was seconded by Trustee Gina Lucrezi.

The consent agenda was approved unanimously. Roy Gertson and Kathy Hoerlein were reappointed and Catherine Hunt was appointed as regular voting members of the Tree Advisory Board. The board also approved the purchase agreement for 28362 CR317, the location of the new police department, and authorized the Town Administrator, Phillip Puckett to execute any and all documents required to complete the purchase.

In his staff report, Town Administrator Phillip Puckett reminded the board about their meeting with the Sangre de Cristo Electric Association (SDCEA) on February 1, 2022. The board’s current franchise agreement is set to expire at the end of April 2022, and the staff has drafted terms to address in the agreement:

Town Staff also has a meeting scheduled for January 27, 2022, to continue talking with the school district about potential joint efforts on local properties, and Puckett invited participation from a trustee if there was interest.

The trustees were invited to an update from the Greater Arkansas River Nature Association (GARNA) on Monday, April 11, at the Board of County Commissioners work session. The update will focus on the countywide Waste Diversion Study, its recommendations, and the first phase of the community education initiative. Puckett reminded the trustees that a recording of the Jan. 20 virtual public meeting discussing the Rodeo Grounds and Chicago Ranch preliminary site plans were available on the my-bv.com website.

Staff is drafting the Department of Local Affairs (DOLA) grant application for the police station, due March 1, 2022, and will bring a resolution to support and approve the application to the board in February. The Water Rate study, performed by Wright Water Engineers (WWE), is underway, and they will share a draft with the Board prior to February 8th Water Work Session.

“It’s been a very busy beginning of the year,” Mayor Duff Lacy said after Puckett’s report. “Plenty of opportunities to get involved if one wishes to.” 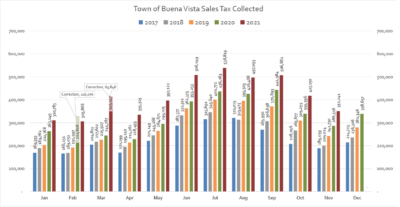 Treasurer Michelle Stoke shared that she and Trustee Libby Fay reviewed the Request for Proposal (RFP) submissions for audit services, and agreed to pursue the services of Hinkle & Company. The town’s sales tax collections came in at $351,241 for November 2021. October 2021 sales tax came in at $471,150, and November of 2020 saw $286,518 in sales tax.

Planning Director Joseph Teipel said the Planning and Zoning Commission has finalized its meeting schedule, with regular meetings at 7:00 p.m. on the first and third Wednesday of each month. He added that there are currently 638 participants on my-bv.com, and they are seeing about 78 percent of people engaging with newsletters.

Teipel has met with the Fading West developer team twice to begin writing up draft terms sheets for the Carbonate Street Development and will bring drafts to the next trustee meeting. They are trying to arrange a factory tour and a discussion session with Fading West for the trustees as well. Staff also met with representatives for the Boys and Girls Club to hear more about the next steps for the Buena Vista facility. They expect to have them provide an update to the board sometime in March or April.

Public Works Director Shawn Williams shared that the staff, JVA Consulting Engineers, and the engineering team will meet in February to continue working on the Water Treatment Plant. Additionally, Williams shared the 2022 Street Paving Milling and Overlays Project list, which will be finalized for the request for proposal in February. The sidewalk repair and replacements for the 2022 list target multiple efforts on and around East Main Street. 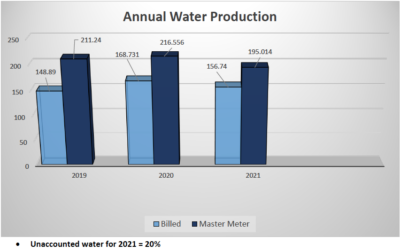 Williams’ water updates included that Ivy League discovered and repaired a large leak in December 2021. Staff will continue to monitor, communicate, and apply the appropriate methods to resolve the issue. The town also installed a new water master meter in December. 20 percent of water in 2021 was unaccounted for, which Williams said was a considerable decrease.

“We are anticipating a leak happening,” Williams said. “But I think going into 2022…we probably would like to see about outsourcing some leak detection services, and I think the first place we probably should have them go would be the Ivy League system.”

Trustee David Volpe asked whether leaked water would be billed to Ivy League, and Williams explained that it was not but that “based on our current water rates, it’s a pretty sizable amount of revenue.” 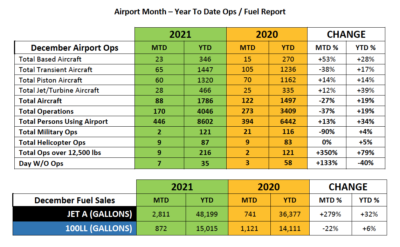 Airport Manager Jack Wiles reported that airport operations are steady for this time of year and are up across the board, including 346 based aircraft this year to date compared to last year’s 270. They are also preparing for the upcoming apron rehabilitation project, the resolution for which would come later in the meeting. They’ll be applying for a Federal Aviation Administration (FAA) grant to fund the project. The Design Phase will cost $143,972, plus a surplus of $5,000 for administration fees.

Volpe asked if there was data for the town to see why the airport is starting to see a jump in the number of aircraft at the airport, and Wiles replied that more people are moving to the area.

“It just seems like the airport is a good spot to do some sort of data collection,” Volpe said. “I realize the observations are anecdotal.”

Wiles said they could certainly speak to why there were more people coming in. “You’ve got a lot of people here transitioning through this airport…People want to get out of the city. All the little mountain towns have been discovered.” 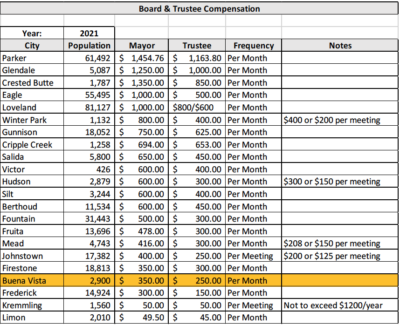 “The burden is the responsibility,” Lacy said, expressing that he doesn’t feel trustees are under-compensated. “It doesn’t matter whether you make a dime for it. It’s what you make it. What are you here for?”

“I mean, it’s appropriate to have something,” Lucrezi said. “I don’t see why it couldn’t be raised but at the same time, if it doesn’t, it’s not the end of the world.”

Nyberg proposed increasing compensation by $100 for both the mayor and the trustees for the incoming board, and  Rowe and Fay agreed. Rowe then moved to increase the rate of pay to $350 per month for trustees and $450 for the mayor (as of the incoming electeds) and Nyberg seconded. The motion carried unanimously.

The board also unanimously approved Treasurer Michelle Stoke’s presented resolution for the board to adopt a final adjusted and supplemental budget for 2021, as well as the resolution for the board to adopt final supplemental appropriations for 2021, the last business items on the agenda. The resolutions were approved unanimously. The town’s budget and revenue information can be found at https://cleargov.com/colorado/chaffee/town/buena-vista.

During Trustee-Staff Interaction, Lucrezi thanked Teipel and Doering for all the work they did ahead of the meeting and for the information they put together. Special Projects Manager Joel Benson said the decorative light fixtures in town should be up and running but to let him know if there were any issues.

Nyberg asked whether there was any chance of the lot on North Colorado Avenue being cleaned up further and emphasized that with the growing development in that part of town, the lot was still an “eyesore.” Swisher expressed her desire to keep track of the Ivy League leak and where that process goes, as it’s been going on since she first joined the board.

Fay wrapped up Trustee-Staff Interaction by taking a moment to thank those on the board for their work and service, saying she’s looking forward to seeing those who are running for seats in the upcoming April 5 election.

The board adjourned to Executive Session at 10:47 p.m. to discuss the Franchise Agreement with Sangre de Cristo Electric and the potential acquisition of water rights. The Board of Trustees will meet for their next regular meeting at 7:00 p.m. on Feb. 8, with a work session preceding the meeting at 5:30 p.m. to discuss water policies. No decisions will be made during the work session. Staff and the public are invited to attend the meeting virtually.